One manager shouts and swears at his employees. Another is so incompetent that she has caused an “exodus” of talented workers. A third favors employees who share his religious beliefs.

The American Federation of Government Employees Local 17, which represents staff in the Veterans Affairs Central Office, details allegations that union members have levied against their supervisors in a report to Veterans Affairs Secretary Bob McDonald. AFGE submitted the report to McDonald in July. Federal News Radio obtained a copy of it after filing an open-records request with the department. The VA redacted managers’ names, it said, to protect their privacy.

The union says McDonald asked it to help identify managers who fell short of the department’s values of integrity, commitment, advocacy, respect and excellence, or who prevented their employees from raising concerns. The union then reached out to its members to compile the list of managers whom the union calls “disruptive and ineffective.”

The resulting 40-page report alleges both serious misdeeds and downright bizarre behavior. It accuses one manager of involvement in a contract that is now the subject of litigation. Several others, it says, have ignored federal policies on telework, leave and reasonable accommodations for employees with disabilities.  Another manager hired her best friend of 20 years. Yet a fourth inspects her subordinates’ clothes and shoes daily to make sure they adhered to her dress code, according to the report.

In a response to AFGE Local 17 President Bill Preston, who delivered the report in June, McDonald said the department would “take appropriate action to terminate employment whether that employee is part of the Senior Executive Service, or the civil service workforce,” when the employee’s performance or conduct warrants it.

VA has not said anything more about the report since then.

The Senior Executives Association also received a redacted copy of the report. It was quick to cast doubt on AFGE’s assertions.

“If the allegations of abusive behavior reported by AFGE Local 17 are true, they are to be condemned and should immediately be dealt with through the proper channels,” SEA President Carol Bonosaro said in a written statement. “Unfortunately, the union’s broad and uncorroborated report on ‘disruptive and ineffective’ managers often employs salacious language and, in many cases, offers little detail on general accusations beyond hearsay.”

Bonosaro noted that the report singles out managers who employ contractors, rather than union members. The document suggests that several managers value their contractors over federal employees who do the same work.

“The report also clearly reflects a frustration by the union with VA’s use of contractors to meet its mission,” she said.

SEA is weighing its next moves. It wants to know what, if anything, the VA has done with the report, Bonosaro said.

The Federal Managers Association and SEA reached out to Congress in August to request an investigation of how AFGE compiled the report and whether union members who work at VA did it during work hours.

In a letter to lawmakers, the groups said the report “threatens to further destabilize labor-management relations at a department that has faced serious challenges in recent years.”

According to SEA lobbyist Jason Briefel, the House Veterans Affairs Committee said it would look into the situation.

AFGE did not respond to Federal News Radio’s request for a response. 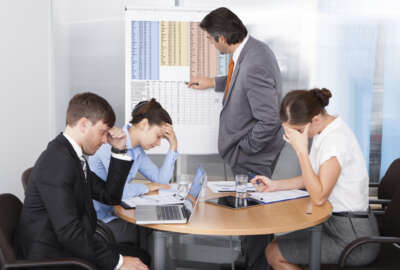