UPDATED: The Office of Personnel Management is closing D.C.-area federal offices on Friday, Jan. 22, at 12 p.m. Read the full story.

The Office of Personnel Management should have a better idea by 10 p.m. tonight about the plans for the federal government tomorrow as the East Coast braces for a huge snowstorm.

OPM spokesman Sam Schumach said the Metropolitan Council of Governments, which includes representatives from the District, Maryland and Virginia counties in and around the region as well as the federal government, is expected to convene a call at 9 p.m. Thursday to discuss and plan for the snowstorm. 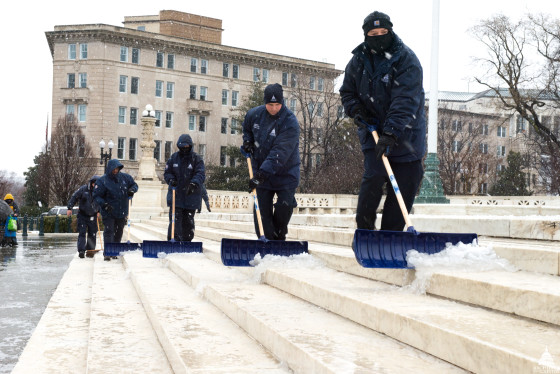 The Architect of the Capitol is responsible for clearing about 14 miles of sidewalks, 7 miles of streets and drives, and more than 20 acres of parking lots and plazas of snow and ice.

Schumach said he expects OPM to have a decision tonight for federal employees about what the government will do in the face of the impending storm. The options include closing altogether, opening on time,but closing early, or closing at regular time.  He said new information from the National Weather Service about changes to the track or the timing of the storm could delay a decision by OPM.

OPM’s highlighted the process by which it makes decision whether or not to close the government in the face of storms through a YouTube video.

Insight by ServiceNow: Learn how data is revolutionizing talent management in DoD in this exclusive ebook.

Federal employees were frustrated by OPM’s decision Jan. 21 to open agencies on time and not at least giving the option of unscheduled telework.

Jason Miller is executive editor of Federal News Network and directs news coverage on the people, policy and programs of the federal government. Follow @jmillerWFED