In a final send off, DHS’ Johnson honors ‘family’ of employees with top awards

A Coast Guard employee whose heroism saved 12 people in a sinking vessel.

A group of “software slashers,” who led an Immigration and Customs Enforcement investigation of counterfeit Microsoft products, which led to the convictions of seven people and $20.6 million.

A team from the Homeland Security Investigations Unit, who quickly responded to a terrorist attack in San Bernardino, California.

These were just some of the Homeland Security Department employees that top DHS leadership honored on Oct. 26 at the Secretary’s Awards Ceremony in Washington.

The department canceled the awards program in 2008. Johnson brought the program back in 2014 and has held three ceremonies since. Reinstating the secretary’s awards was one of the few moves Johnson quickly made when he first joined DHS in 2013.

But Johnson said he sees an upward trend of improving employee engagement at DHS.

“If we want to engage in reform, we have to focus on the men and women of this department,” he said. “We have to focus on your work, your working conditions. So much of our work has been on improving the pay scale, for example, of [enforcement and removal operations], for improving the transparency of training and promotion opportunities. I think we’ve done that.”

Now with a few months left before the end of the Obama administration, he and Deputy Secretary Alejandro Mayorkas took one final opportunity to recognize and thank their employees.

“It has been the privilege of my life to work alongside you and all your colleagues throughout the department,” said Mayorkas, who announced his resignation earlier this month. “It has also been a special privilege to work for and execute the vision of what I think [is] the men and women of the Department of Homeland Security’s greatest champion … the individual who really brought back the notion of true recognition.”

Johnson and Mayorkas handed out honors to more than 85 teams and individuals, which come from nearly every component in the department.

Some other highlights included:

The awards ceremony, which the department held at the DAR Constitution Hall in Washington, is also an opportunity to recognize employees’ families, Johnson said.

“What’s remarkable is you have somebody walk up on stage who was involved in saving the life of 12 people or 20 people or an incredible team effort to bring about something that I know was really important, but I never had a chance to meet them face to face,” he said. “Those are always the two things that stand out.”

Johnson says he has less than 90 days now until his time at DHS ends. For Mayorkas, his tenure ends next week. But both leaders said their time at the department was a highlight of their professional careers.

“My mother’s family were Washingtonians,” Johnson said. “They were all like you, federal servants who loved their country, were patriotic. So when I look out at you, I see my family.” 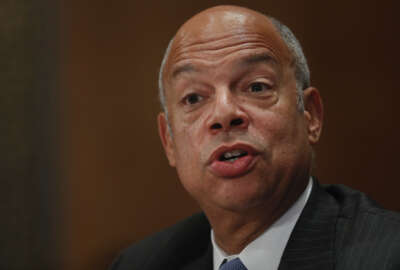