OPM does its part to promote the vote

Feds will have no excuse to not cast their ballots in three weeks; the Office of Personnel Management has instructed agencies to offer excused absences whenever necessary to allow federal employees to reach their polling places.

“Agencies have discretionary authority to grant excused absence to the extent that such time off does not interfere with agency operations, including the ability to adjust policies to circumstances as they unfold,” acting Director Beth Cobert said in an Oct. 18 memo.

Because polling locations tend to be open for long periods of time, generally around 12 hours, OPM does not anticipate agencies having to grant very many excused absences, the memo said. Polling locations in the District of Columbia and Maryland are open from 7 a.m. to 8 p.m., while those in Virginia are open 6 a.m. to 7 p.m.

The primary provision in the memo is that agencies need to ensure employees have at least three hours either before or after work to attend their polling places. Agencies should offer excused absences to employees to either arrive at work late, or leave work early, whichever requires less time off.

The memo does say that if an employee’s polling location is outside of the standard commuting distance, agencies can grant up to one day of excused absence to allow the employee to vote.

Excused absences should only be granted for early voting in the case of employees who will be unable to vote on Nov. 8 due to agency business, and are unable to vote absentee. 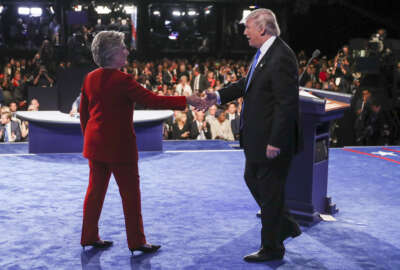 A fed’s guide to the presidential candidates