The recent hiring freeze, abrupt dismissal of Sally Yates as acting attorney general and White House grumblings over State Department employees’ open dissent cable around the travel ban are giving federal employees a lot to think about over the last few weeks.

Lynne Bernabei, a longtime federal attorney, said federal employees could be caught between a rock and hard place as a result.

“This is sort of an unusual situation since we are in a transition period between...

The recent hiring freeze, abrupt dismissal of Sally Yates as acting attorney general and White House grumblings over State Department employees’ open dissent cable around the travel ban are giving federal employees a lot to think about over the last few weeks.

Lynne Bernabei, a longtime federal attorney, said federal employees could be caught between a rock and hard place as a result.

“This is sort of an unusual situation since we are in a transition period between one administration and the second,” Bernabei said on Federal Drive with Tom Temin. “But the courts have said in rare circumstances  where the President, or in this case his officer, do not agree that a law is constitutional, they have a right to refuse to defend it in court.”

As an adviser to the executive branch, it is the duty of the attorney general to determine whether or not an executive order or law is constitutional and should be held up in court,  said Bernabei, a partner with the D.C. law firm of Bernabei and Kabat.

“That’s a very different thing than the duty to enforce and the agencies involved continue to enforce the law until a court tells them not to,” Bernabei said. “The attorney general was saying, ‘I’m not going to go into court to defend the law’ and that was her responsibility while she was in that position.”

Bernabei said Yates’ public disagreement of the law and President Donald Trump’s decision to dismiss her were both correct in terms of standing protocol. The Trump administration has the right to choose its political appointees and being relieved of a post is a risk a career civil servant takes when accepting a political position, she said.

“She is not a person that Trump selected for that position, so she’s sort of a lame duck,” Bernabei said. “She got to that position from the Obama administration, and everybody knew she would be replaced.”

But it’s not the same for State Department employees. After the Foreign Service officers opened the public dissent cable, they published notes giving State Department employees immunity  from being penalized for their comments against the new laws, but this doesn’t automatically protect their position, especially if appointed — and this could spark the next big debate, Bernabei said.

“By news reports, about 1,000 people have exercised their right to use that channel to dissent on the Muslim ban that President Trump enacted through the Executive Order,” Bernabei said. “We already hear rumblings, from the Press Secretary, that there may be repercussions against these individuals.”

While the State Department employees are protected to a certain degree,  for career employees who moved into political jobs, their ability to return to their previous career positions is not guaranteed.

Bernabei said usually returning to their old job would be simple, but the hiring freeze complicates the process as no vacant positions will be filled and no new positions created for at least the next 90 days. But when the new administration lifts the hiring freeze is lifted, it will not be impossible.

As for Yates, the firing from her political position doesn’t impact her career federal benefits.

“This should have no affect on her pension at all,” Bernabei said. “We’ve researched this question in the past. Fired, even federal employees and executives who are terminated for criminal acts, still get their pensions.”

To be clear, Yates was not dismissed because of any criminal or otherwise illegal acts.

Yates shouldn’t have any trouble finding a new position in the private or public  sector,  Bernabei said. Her qualifications would let her take on different roles both as a defense attorney or perhaps with a think tank.

“Wherever she goes, I think a lot of people will see her as being brave for standing up to this,” Bernabei said. 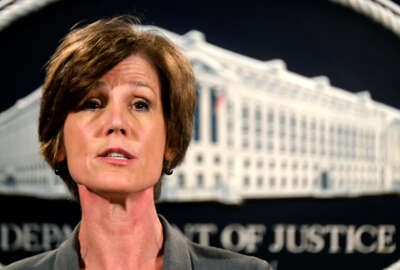