Being a prison officer is now more dangerous than ever

Not many people would trade jobs with those who have to keep watch over inmates in federal prisons. Now that job has become more dangerous as coronavirus has spread in the prisons’ close quarters. With a situation report, Federal Drive with Tom Temin spoke with the president of the American Federation of Government Employees (AFGE) National Council of...

Not many people would trade jobs with those who have to keep watch over inmates in federal prisons. Now that job has become more dangerous as coronavirus has spread in the prisons’ close quarters. With a situation report, Federal Drive with Tom Temin spoke with the president of the American Federation of Government Employees (AFGE) National Council of Prison Locals 33, Shane Fausey.

Tom Temin: Mr. Fausey, good to have you on.

Tom Temin: Give us the backdrop of I guess two things, one, labor relations with the Bureau of Prisons and the union in general. And also, I’d like to get to what things are like in the federal penitentiaries at this point, in terms of officer safety. Let’s start with labor relations.

Tom Temin: So you have a contract that is in place now or are you on the continuation of an old contract?

Shane Fausey: We’re on a continuation of our old master agreement. And we’re in the process, well, we were before COVID-19. We were at the table negotiating ground rules.

Tom Temin: And what are some of the issues that are part with you and the BOP right now? I imagine staffing levels is probably one of them.

Shane Fausey: We have been plagued with staffing concerns since about 2005. They implemented a program called mission critical, which they took about 20% of the correctional services staff or your officers in your prisons. And consistently over the years, most notably January of 2017, they executed another series of cuts. We’re down probably close to 9000 to 10,000 positions since 2005. Unfortunately, in a prison when you reduce your overall staffing numbers, your violence exponentially increases.

Tom Temin: And there have been some pretty bad incidents in the last couple of years.

Shane Fausey: There has been some extremely bad incidents, especially since January of 17, we’ve noticed suicide rate amongst inmates has almost doubled. When you cut staffing numbers, there’s definitely consequences.

Tom Temin: So it’s not necessarily only a consequence for the staff, but also for the inmates as well?

Shane Fausey: Correct. I mean, it directly affects the level of safety in your institution. It’s what we call a staff to inmate ratio. It’s how many officers do you have for a certain number of inmates when that number starts to drop, or you have less supervision, exponentially violent or reportable incidents increase, like homicide, suicide and things of that nature.

Tom Temin: So part of the negotiations then is the union would like to see staffing levels simply rise across the board for a given shift?

Shane Fausey: That’s correct. Unfortunately, we have to resort to a lot of legislative activity and or garnering some support from our congressmen and senators to get that done. The agency sometimes just can’t help itself.

Tom Temin: Alright, and let’s talk about the coronavirus now. That has come into prisons in a pretty big way at all levels, federal on down. How has that affected your members?

Shane Fausey: Unfortunately, it’s seriously impacted the lives of our members, just as well as it has the entire country. In the situation that we’re in the numbers as of this morning, we lost our 49th inmate, we had lost one employee to COVID-19. We have over 3300 inmates that have tested positive and over 250 staff that have tested positive. Understanding that those numbers are extremely low considering our population numbers, because testing is not readily available and/or the Bureau of Prisons is not mass testing like we’re expecting them to do.

Tom Temin: That is to say you feel the numbers are actually larger if everyone was tested?

Shane Fausey: The two facilities that we’ve done mass testing, we’re getting numbers between 70 and 80% of the inmate population is testing positive. That’s about four facilities. So you can see the numbers are going to exponentially increase.

Tom Temin: And in those facilities, I guess or all the facilities, the inmates and correctional officers do come close to one another, don’t they?

Shane Fausey: You don’t have a choice. physical security requires a hands on approach when it comes to your higher security levels. What we’re finding is our most problematic institutions are your low security institutions, where you don’t have a physical or natural barrier in between human beings, ocial distancing becomes more of a challenge because they share showers, they share sinks and commodes and things of that nature.

Tom Temin: So these would be say the white collar types of criminals that live more in a dormitory type environment than a cell by cell.

Shane Fausey: A little bit more towards your drug related offenses. Your white collar crimes tend to be housed in your camp type or non secured facilities. What we’re finding is the most problems are in the low security secured facilities. They have fences and infrastructure to keep inmates inside the building.

Tom Temin: And how has the Bureau of Prisons been with respect to supplying personal protection gear and supplies that the correctional officers and the inmates might need?

Shane Fausey: Unfortunately, we’re vying for the same stock of PPE is what we refer to it as different types of protective equipment. We’re vying for the same stock that the entire world is trying to get their hands on right now. So unfortunately, the bureau when this pandemic first affected us, was very ill prepared, and the Bureau has a history of being reactive, not proactive, so they’re trying to play catch up. I think they’re doing a better job, but we need more what we call certified PPE. They’re trying to use cloth facemask when OSHA says we should have a surgical mask or an N95 respirator, there’s a distinct difference between the two.

Tom Temin: And those supplies now how would you rate them in terms of availability at the institutions, you know, one by one?

Shane Fausey: I would say the stock availability in most institutions is fair. And I’m going to go out on a limb to say that because we have asked the leadership of the Bureau of Prisons on a number of occasions, formally and informally, hey can you give us the number so we can decide what institutions need them and kind of help redistribute the supplies to the institutions that need them the most? And they absolutely refuse to answer all of our requests, and a lot of congressional requests have gone unanswered as well.

Tom Temin: Interesting. And what about the inmates? Do they willingly wear masks or do they use maybe a cough as some sort of a punitive thing in certain situations?

Shane Fausey: Getting them to wear the mask is a challenge, but I would say far and wide for the most part, inmates have been extremely compliant. The inmates are as concerned or downright scared as, you know, the staff are when dealing with an invisible monster.

Tom Temin: But just to go back to your earlier point, you have made requests for the BOP to take measure of what it is that the institutions need, and they haven’t been all that responsive?

Shane Fausey: They give generalized responses like we have enough PPE to last from two weeks to two months. But I’m not sure how that plays into figuring out an equation. But we need distinct numbers. Where is it at? How much do we have? Because there’s institutions that have a higher rate of COVID-19. And there’s some that have no effects. So we would like to help distribute that supplies to where they needed the most.

Tom Temin: All right, and my question would be, then, where do you go from here? And what’s your expectation of when these contract negotiations might be settled?

Shane Fausey: The contract negotiations are everything that we do as a national council is secondary to surviving the pandemic that we’re in the middle of. We’re seeing our numbers are continuing to rise. We’ve really had a staffing challenge before COVID-19 so this just exacerbated a problem to the extent where they’re deploying staff from administrative buildings to different facilities just to keep them functioning. So we’re a long ways away from turning the corner, so to speak. And we need to survive the virus, number one. The paramount concern is how do we do that without affecting the local communities and or bringing the virus home to our families? And then once we contain the outbreak and control its spread, where do we go from there? What is the next step for returning to normalcy?

Tom Temin: And would you rate correctional officer as a difficult job?

Shane Fausey: I would rate correctional officer is one of the most challenging professions in the country. You have a captive audience, no pun intended. And they’re very challenged. A lot of the young men that we see coming into the system didn’t have a family type structure. So a lot of successes when you want to return an inmate to society and you want them to be productive, is teaching them how to be a productive person, how to get a job, how to get up in the morning and just basic things. So a correctional officers job is more than just security. It’s how do you communicate with human beings? How do you get inmates from a dozen different countries that barely speak English, how do you get them all to cooperate with each other through the course of the day? And all of that, coupled with the propensity for violence that our population has makes it that much more challenging. But I will tell you, the correctional officers in the bureau of prisons are hands down the best in the world.

Tom Temin: Shane Fausey is president of the AFGE National Council of Prison Locals 33. Thanks so much for joining me.

Shane Fausey: Thank you. Have a good day.

With a potential return of Congress, federal hazard pay will be up for debate 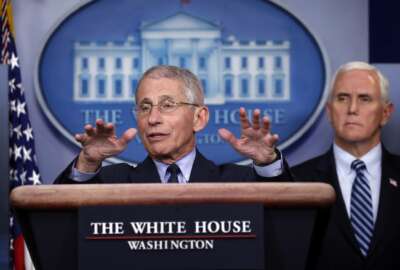