8 trends to keep ahead of in federal contracting

The Trump administration has most of Washington on the edge of their seats waiting to see what comes next, and federal contracting is no different.

“Everyone knows the federal market is driven by budgets, and budgets are driven by the presidential budget request,” Kevin Brancato, director of government contracts research at Bloomberg Government, said in an April 27 webinar. “What I would advise federal contractors to look at is agency priorities and see where they...

The Trump administration has most of Washington on the edge of their seats waiting to see what comes next, and federal contracting is no different.

“Everyone knows the federal market is driven by budgets, and budgets are driven by the presidential budget request,” Kevin Brancato, director of government contracts research at Bloomberg Government, said in an April 27 webinar. “What I would advise federal contractors to look at is agency priorities and see where they align with the president’s priorities … and you’ll likely see those agencies is where the money will be spent.”

But he said that all the budget really changes is which agencies spend the money, not so much how they spend it. That’s why he said he expects to see these eight trends continue into 2018:

The consolidation of contract vehicles has been happening since 2015, and its use has steadily increased, especially for items like desktops and laptops. In the future, Brancato said he wouldn’t be surprised to see it applied to things like cybersecurity services.

Along similar lines, Brancato said he expects to see more examples of agencies pulling together to collectively purchase support functions like financial management, human resources and IT.

“There’s a tremendous difference in the cost of compliance across different types of companies,” he said. “So while we see compliance standards not going away, we think there’s a potential broader impact that has been seen and will continue to be seen.”

He said it affects the smaller contractors disproportionately, and will present smaller companies with unique challenges, especially as they grow.

Brancato said the federal government has for some time been spending more money on first-time vendors, but has been dividing that money among fewer companies. Almost three-quarters of these first-time vendors have been small businesses.

“We’re seeing a substantial ability to enter the marketplace,” he said.

Brancato said the Defense Department used ‘Other Transaction Authority’ three times as often in 2015 for research and development of prototypes and cutting-edge technologies. Spending under this authority reached $224 million in 2016.

IT contract spending is up 2.4 percent at civilian agencies, Brancato said, and cybersecurity obligations are up 38 percent. In addition, IT modernization is one of the focuses of the new Office of American Innovation, and it’s joined by cybersecurity in the budget blueprint.

“I have not heard a convincing argument from anyone that it’s been tackled, that they know how to tackle it, or that it’s becoming commoditized. I think that was a fear quite a while ago, that cyber would be commoditized, but threats grow ever more problematic,” he said.

“We found that simplified acquisition procedures (SAP) spending has grown even when the federal market was shrinking, hitting a 10-year peak in 2016, and we see no reason for that to shift,” Brancato said.

He said he believes President Donald Trump will prefer SAPs due to his own business experiences and complicated contracts with the government.

In addition, SAPs help to avoid protest delays, and give preferences to small businesses.

Despite reports to the contrary, Trump’s tweets do not have much long-term effect on a company’s worth in the market.

“This is noise. This is not a signal. I actually tell people to ignore these things most of the time,” Brancato said.

In fact, he said contractors want to be tweeted about, because it probably means they’ll get to meet him, and that would be good for business.

Defense contracting rebounded in 2016, but R&D spending continues to suffer 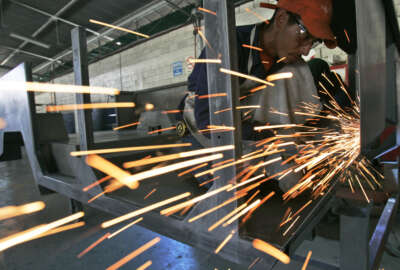 What contractors should expect from the Trump administration