The U.S. Postal Service’s independent regulatory body may raise the price of a postage stamp after it finishes reviewing the current rate-setting system later this fall.

The Postal Regulatory Commission’s ruling later this year could give USPS some of the pricing flexibility on postal products that Postmaster General Brennan has repeatedly called for as part of a larger campaign to reform the Postal Service’s financial future.

The current cost of a first-class stamp is 49...

The U.S. Postal Service’s independent regulatory body may raise the price of a postage stamp after it finishes reviewing the current rate-setting system later this fall.

The Postal Regulatory Commission’s ruling later this year could give USPS some of the pricing flexibility on postal products that Postmaster General Brennan has repeatedly called for as part of a larger campaign to reform the Postal Service’s financial future.

The current cost of a first-class stamp is 49 cents. The PRC in April 2016 repealed a 2 cent exigent postal rate increase that had been in place since the 2008 recession, bringing the price of a stamp down to 47 cents, but had reversed that decision this January. The PRC regularly reviews postal rates to keep pace with inflation.

USPS recently announced that it ended its second quarter of fiscal 2017 with a $562 million loss.

During the public comment period of the ongoing rate review, General Counsel David Trissell said that the PRC received more than 70 comments, some of which were received from postal unions like the National Association of Letter Carriers and the American Postal Workers Union.  The PRC is reviewing the postage rate-setting system due to a mandate in a 2006 postal reform law, and must determine whether the current system meets nine viability criteria listed in the law.

“The commission is currently diligently reviewing those comments, doing its own evaluation, with the intent to issue a decision … in early autumn,” Trissell said. “If necessary, these findings would be followed by another docket, which would outline potential solutions, potential modifications of the system, if necessary, to achieve those nine statutory objectives.”

If passed, a bipartisan postal reform bill would, among other things, introduce a 1 cent exigent rate increase. The bill, sponsored by Rep. Jason Chaffetz (R-Utah), passed the House Oversight and Government Reform Committee in February. Chaffetz even briefed President Donald Trump about the importance of passing the postal bill.

“I think it’s notable that this legislation has such wide bipartisan support. This is a public policy issue that touches the lives of every American on a daily basis … although it’s not on the Sunday talk shows or maybe on the front page of the paper, it’s notable that in a bipartisan way, Congress is moving this forward,” Taub said.

Margaret Cigno, the director of the Office of Accountability and Compliance, said the Postal Service has been “relatively successful” in meeting service standards on delivering packages and parcel-shaped mail, but has fallen short on other performance goals.

In a report released in April, the PRC found that USPS failed to meet six of seven performance standards for on-time delivery. The on-time delivery problem is more acutely felt in rural communities, and based on feedback from constituents, Sens. Heidi Heitkamp (D-N.D.) and Claire McCaskill (D-Mo.) have called on the Government Accountability Office to investigate how USPS holds employees accountable for meeting delivery standards.

“While USPS faced difficulty in the past few years meeting its service standards, it began to see service improvements in 2016. We would ordinarily be heartened to see improvements in service, but these reported improvements do not align with feedback from our constituents or the reported confusion about how long it takes to send mail from point A to point B,” the senators said in their letter to GAO Comptroller Gene Dodaro.

“In line with the Federal Information Security Management Act (FISMA), and as part of our commitment to good stewardship, we have taken considerable steps to harden our information technology infrastructure and software. We are also working with the Department of Homeland Security, implementing numerous DHS cybersecurity tools.” 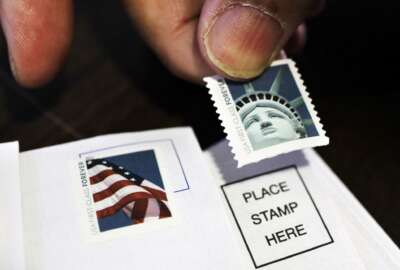