The Internal Revenue Service, faced with ongoing budget constraints, expects fewer people will be able to have their tax filing questions answered over the phone this year, according to an annual report to Congress from an IRS watchdog.

National Taxpayer Advocate Nina Olson, an independent oversight official within the ranks of the IRS, informed lawmakers this week that only about 4 in every 10 callers to IRS hotlines will be able to get through to...

The Internal Revenue Service, faced with ongoing budget constraints, expects fewer people will be able to have their tax filing questions answered over the phone this year, according to an annual report to Congress from an IRS watchdog.

National Taxpayer Advocate Nina Olson, an independent oversight official within the ranks of the IRS, informed lawmakers this week that only about 4 in every 10 callers to IRS hotlines will be able to get through to a live operator to answer their tax questions during the fiscal 2018 filing season.

“Because of the IRS’s archaic telephone technology and operations, taxpayers face long wait times with the worry that the IRS’s telephone assistors will not be able to answer their questions if they are able to get through,” Olson wrote in the report she released Wednesday. “Failing to provide high-quality service to taxpayers over the phone has the potential to reduce voluntary compliance, which can place an unnecessary burden on the compliance functions of the IRS in the future.”

For years, the IRS has struggled to improve the level of phone service at its call centers and even saw significant improvement in the last few years. During the last filing season, the IRS reported that 77 percent of callers spoke with a live operator on a tax-help hotline, compared to just 54 percent in fiscal 2016. The IRS receives more than 95 million calls each year on its phone lines.

Even if taxpayers do get through to somebody on a tax-help line, they might not get the help they need if they have a complicated question, or need an explication of the new tax reform law passed by Congress and signed by President Donald Trump in December.

Since 2014, IRS telephone assistants have only been able to answer “basic” tax questions during the tax filing season, and are unable to handle questions from any of the 16 million Americans who file late tax returns. Since fiscal 2009, the IRS has cut its employee training budget by 75 percent.

“This limitation sharply curtails what had once been a valuable feature, as the IRS telephone lines had provided the ‘fastest and best experience’ for taxpayers seeking to get answers to tax law questions,”
Olson said.

Under its Future State Initiative, the IRS has focused on expanding its ability to deliver online financial services, but Olson said this approach leaves out millions of taxpayers who don’t have internet access at home or cannot find a solution to their tax questions online.

“This approach allows the IRS to focus on the channels of communication it prefers, but not where taxpayers might find the best form of assistance,” she wrote.

“The IRS absolutely needs more funding. It cannot answer the phone calls it currently receives, much less the phone calls it can expect to receive in light of tax reform, without adequate funding. But within the budget it currently has, there are plenty of opportunities for the IRS to demonstrate that it can do a better job of using creativity and innovation to provide taxpayer service, encourage compliance, and address noncompliance,” Olson wrote.

“Thus, it does not appear that PCAs are particularly effective in collecting the debts assigned to them,” Olson wrote.”

When asked about the report’s findings, an IRS spokesman told Federal News Radio in a statement that the taxpayer advocate plays an important role in overseeing tax collection.

“The National Taxpayer Advocate’s annual report covers a wide range of issues and topics, and IRS leadership will be reviewing these,” the spokesman said. 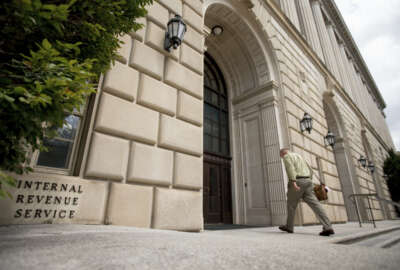 After Equifax breach and ahead of 2018 filing season, IRS lays out plans to defend against tax frauds