Whether it’s the President’s Management Agenda or the ongoing effort to stand up five Centers of Excellence within the Agriculture Department, all signs point toward moving to the cloud as a key driver of IT modernization.

But as the growth of cloud adoption has increased in government, so too has the complexity. And with that complexity comes a barrage of choices that agency IT offices must navigate.

“I think nobody can say the complexity in IT...

Whether it’s the President’s Management Agenda or the ongoing effort to stand up five Centers of Excellence within the Agriculture Department, all signs point toward moving to the cloud as a key driver of IT modernization.

But as the growth of cloud adoption has increased in government, so too has the complexity. And with that complexity comes a barrage of choices that agency IT offices must navigate.

“I think nobody can say the complexity in IT has decreased,” Syed Azeem, a senior IT project manager at the General Services Administration, said June 6 at Meritalk’s 2018 Cloud Computing Brainstorm event in Washington, D.C. “There’s a lot of options with cloud, so those choices present complexity. There’s more integration happening — you don’t have a data center anymore. You have 10 cloud services, now you have to figure out how to integrate them, secure them, and make sure you have the infrastructure back on-prem to support that cloud sprawl.”

While agencies understand that there’s no one-size-fits-all approach to cloud migration, Azeem said GSA has urged agencies to consider whether commercial cloud solutions might be the best fit for their mission goals.

“I give people a lot of grief sometimes when they’re saying, ‘I want to go to the private cloud.’ I say, ‘That’s great, do you have the use case for that? Have you considered commercial cloud, because a lot of the new services and innovations are really happening in the commercial cloud space,'” Azeem said. “That’s one thing that I’ve noticed, is that we have to get our mindset away from IT assets, and focus more on the services and the capabilities that cloud can deliver.”

Nine months ago, Deputy Secretary of Defense Patrick Shanahan ordered DoD’s component agencies to make moving their IT systems to commercial cloud a priority, including through its new JEDI contracting vehicle.

At the Air Force, Jason Howe, the chief technology officer and chief cloud architect in the A1 CIO Support Division, said the service has already cleared most of the preliminary hurdles around cloud adoption — including cybersecurity, contracting,  legal concerns and data concerns.

“There were a broad set of requirements that we had to address early on. But I think today it really comes down to a mission-owner perspective,” Howe said.

And to meet those goals, Howe said the service sees commercial cloud solutions as a path forward.

“When you think about our digital transformation for manpower and services, it very much aligns to what industry does. Human resources talent management, there’s a lot of capability in the cloud today that industry uses, and we’re looking to leverage the same kinds of things,” Howe said.

In order to get where it is today, Howe said the Air Force had to address some fundamental steps.

At the Interior Department, Larry Gillick, the deputy director for digital strategy, said the agency has tried to move to platform-as-a-service, rather than a simple cloud buy, freeing up its IT staff from working on server-level issues.

“How many developers who’ve wanted to do cool things have been held up doing point updates to things?” Gillick said. “I take all that underlying work, and I’m going to pay somebody to do that.  And then I’ve got the security covered and all the rest of it.”

Under the President’s Management Agenda, the Trump administration has focused on reducing federal employees’ time spent on low-value work.

Along those lines, Azeem estimated that workers both in and out of government spend about 20 percent of their workdays just searching for information. Looking ahead, he said moving to the cloud could lead to greater adoption of automation, which, in turn, could help workers find the information they’re looking for.

“One of the trends that I see coming is information will find the employee or the workers, as opposed to them looking for it,” Azeem said.

As for the Interior Department, Gillick said the agency continues to work on providing a better mobile experience for its employees.

“Can industry provide me a seamless user experience when I have 10 software-as-a-service offerings? I don’t think we’re there today, but those are some of the things we talk about, is how to optimize that user experience. That’s got to be a consideration in that decision-making process before you ever hand it over to the technology people. The business decision needs to incorporate all these points,” he said.

Air Force getting jump on mandate to accelerate cloud adoption, including milCloud 2.0 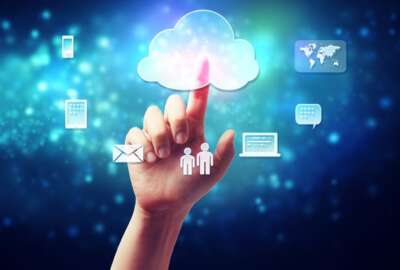