Roughly 13 years since the Executive Branch reorganized itself to stand up the Homeland Security Department, and Congress will soon consider a variety of changes that could impact the agency’s structure and the way it receives oversight and appropriations from the legislative branch.

House Homeland Security Committee Chairman Michael McCaul (R-Texas) said he plans to issue a report with a series of suggestions for the next administration for reforming, reorganizing and streamlining DHS.

“It’s a variety of things; it’s how can consolidate and streamline and make it more effective and efficient and also use technology to advance that mission,” he told reporters after the Atlantic’s “DHS: 15 Years Later” event in Washington Sept. 8.

McCaul said he expects to release the report in November or December.

But DHS leadership has its own ideas to make the agency more effective and efficient.

Though the executive branch made several significant changes to form DHS back in 2002, the legislative did not, said Jeh Johnson, the department’s secretary.

Depending on the count, DHS has anywhere from 92 to 108 different congressional committees and subcommittees that oversight jurisdiction over the department.

“It is very difficult to get a bill to authorize any of our missions when you have to go to multiple different committees and you’re pulled in multiple different directions to get a bill out of a committee, out of a house of Congress. You can’t just go to one committee to make that happen,” Johnson said. “That hurts homeland security, and I’m hoping that one of these days, Congress is going to finally grapple with this.”

Those discussions could happen soon.

“I’m going to propose that we change this in the next Congress,” McCaul said. “It’s my responsibility and inaction will cause problems for us.”

McCaul said he hasn’t been immune to the frustrations and delays that come with passing a bill for DHS.

“It’s dysfunctional. It cripples the department,” he said. “I’ve had legislation myself, like the visa security waiver bill, that got held up for three years because of jurisdiction. It wasn’t until [the terrorist attacks in Paris] happened, that I was able to get that bill on the floor.”

Johnson said he hoped that congressional oversight for DHS might look similar to that of the Defense Department. DoD reports to the House and Senate Armed Services committees, in addition to the defense appropriations subcommittees in each chamber.

Fewer committees with jurisdiction over DHS may also free up more time for the secretary and his staff.

“I read every letter I get from members of Congress and I get a lot of them,” Johnson said. “It consumes time to respond to that, notwithstanding that, we have dramatically reduced the time it takes to respond to a congressional letter — down to something like 14 days. And we actually say something in these letters.”

“It would be a lot easier if…whoever succeeds Secretary Johnson, has an opportunity to build relationships with a smaller group of men and women on the Hill to help him or her…[to] continue to build on his Unity of Effort,” he said. “It is so disparate, and frankly, you still see vestiges of the silos that we inherited.”

Breaking down those silos was the driving factor behind Johnson’s “Unity of Effort” initiative, which Johnson began in 2014 to streamline and connect all 22 DHS components.

He said he hopes the next administration makes a concerted effort to continue some of the management reforms the department already started.

For example, one of those items awaiting congressional action is a measure that would reorganize the National Protection and Programs Directorate. Johnson — and McCaul agreed — said that the legislation would organize the department’s cyber operations into one, full-fledged component to deal with cybersecurity.

Improving DHS morale is another key aspect of Johnson’s management reforms. The department has ranked last among large agencies on the Federal Employee Viewpoint Survey for the five years.

“A lot people see a lot of the good work that we do,” he said. “They see, for example, how wait times at airports were reduced this summer after we devoted a lot of resources and effort to it. There’s always more work to be done. It’s still very much a work in progress. Our department is only 13 years old. But I’m fairly certain we’re improving morale within the department.”

The 2016 FEVS results will come out within the next few weeks. Johnson wouldn’t specify, but he suggested his department might have a more positive story to tell this year. 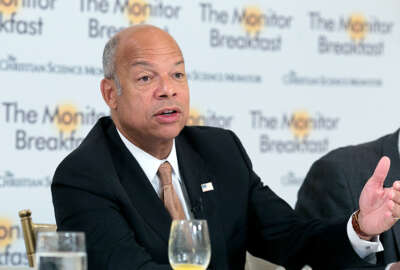