6 legislative actions to watch for during the lame-duck session

The election may be over, but federal employees still face uncertainty on a number of key issues, not least of which is how the government will be funded. When Congress returns on Nov. 14 and again on Nov. 28,  the 2017 fiscal appropriations bills are just one  of several pieces of legislation they have to address.
Avoiding a government shutdown
President Barack Obama signed the continuing resolution to fund the government on Sept....

The election may be over, but federal employees still face uncertainty on a number of key issues, not least of which is how the government will be funded. When Congress returns on Nov. 14 and again on Nov. 28,  the 2017 fiscal appropriations bills are just one  of several pieces of legislation they have to address.

President Barack Obama signed the continuing resolution to fund the government on Sept. 29, but that expires on Dec. 9.

“When we return in a lame-duck session after the elections, we must pass legislation that will keep the government open throughout FY17, which will provide federal agencies and businesses the long-term certainty to create jobs and grow our economy,” Rep. Donna Edwards (D-Md.) said in a Sept. 28 statement, after Congress passed the bill but before the President signed it.

House Speaker Paul Ryan (R-Wis.) has suggested passing a series of “minibuses” rather than one large spending bill. But Democratic leadership is not yet on board with that plan.

“If you want to do minibuses, they have to add up to an omnibus,” House Minority Speaker Nancy Pelosi (D-Calif.) said during an Oct. 19 press conference. “But to do a minibus and a [continuing resolution] is like two derelictions of duty. We are failing on two scores. We have to rise up to our responsibility of what we have to do. We come back, we are ready to cooperate in any way to get this done in a reasonable time and remove all doubt that we will have an appropriations bill going into next year.”

Tony Reardon, president of the National Treasury Employees Union, emphasized in an emailed statement the importance of this legislation, in whatever form it may take.

“In the lame-duck session, it is critical that Congress pass a new funding bill to keep the government operational past Dec. 9, when the current budget measure expires, with adequate funding for federal agencies,” Reardon said. “NTEU is particularly focused on sufficient funding for [the Internal Revenue Service] which has lost more than 20,000 employees since 2010 due to budget cuts.”

Likewise, the two chambers of Congress have yet to hash out their differences on a defense spending bill. The House and the Senate have passed different versions of the National Defense Authorization Act, which is currently in conference to resolve the differences.

Obama has threatened to veto the House version of the bill over certain maneuvers intended to increase the budget beyond what he requested. The House Armed Services Committee plans to take $18 billion from Overseas Contingency Operations (OCO) and move it into the base budget. That $18 billion would be used to fund an increased military pay raise and to bolster troop levels by 27,000.

What would be left in OCO is $41 billion, instead of the original $59 billion requested by the President. That’s enough to cover the wars until April 2017. Congress would then have to pass another wartime supplemental bill to pay for the wars after April.

“I think the dynamic there has always been about figuring out what Congress can pass and not get vetoed,” said Trey Hodgkins, senior vice president for public sector at the IT Alliance for Public Sector. “We’ve heard conversations are happening and the bill is moving forward again.”

And the results of the election have changed the dynamic between the White House and Capitol Hill in a noteworthy way.

“I think the wins both in the White House and retaining the Senate majority for Republicans gives them more political capital to use as they finish up things specifically on the NDAA,” Justin Johnson, senior policy analyst for defense budgeting policy at the Heritage Foundation, said to Federal News Radio. “There’s outstanding issues that need to be addressed, and some of them are potential veto fights for the president. But he knows that they’ve got basically a different option come Jan. 20. It changes the whole calculus on both sides.”

Federal Chief Information Officer Tony Scott has spent much of the last year talking about this systemic problem. OMB submitted a proposal to Congress in the fiscal 2017 budget request for a one-time influx of money to give agencies the boost they need to break the cycle of supporting old IT systems year-after-year.

Then, over the summer, Rep. Will Hurd (R-Texas) responded with an alternative proposal, the Modernizing Obsolete and Vulnerable Enterprise IT, or MOVE-IT, Act. In September, Hurd merged the two proposals into the Modernizing Government Technology Act, which passed the House in September.

The bill now sits in the Senate, where it’s been referred to the Committee on Homeland Security and Governmental Affairs.

The Professional Services Council sent a letter to Senate leadership on Nov. 4 urging them to take up this legislation during the lame duck session.

“There is an important opportunity but a very limited window of time for this session of Congress to act on vital legislation to improve cybersecurity and address concerns with the government’s legacy IT systems,” said David Berteau, PSC president and CEO. “Congress and the executive branch should use this narrow window of opportunity to pass this important legislation and kick-start the modernizing and upgrading of federal information technology as well as enabling the adoption of new technologies to help make government more effective.”

However, on Nov. 9, Dave Wennergren, executive vice president for operations and technology, said PSC hasn’t yet received any feedback on the letter from Senate.

“We would like the Senate to take action on the MGT bill,” Wennergren told Federal News Radio. “I’m not sure if it is more or less likely after the election, but my hunch is less likely. With a lame duck Congress, why should they deal with anything more than you have to? They could pass a continuing resolution through March and not come back until the new Congress starts. I’m a little concerned.”

Hodgkins said the main challenge it faces is the shortness of the lame duck session, but he’s hopeful about its chances.

“Any legislative initiative faces the threat of the calendar,” he said. “It’s extremely truncated and there are some things the Republicans may try to advance and the MGT bill is one of them.”

Both chambers of Congress also need to reconcile different versions of reform bills for the Veterans Affairs Department.

The House has passed some VA reform legislation, such as the VA Accountability First and Appeals Modernization Act, which some groups have praised for its whistleblower protections, but others have criticized.

“This legislation suggests more of an interest in the appearance of reforming the VA workforce than a real commitment to undertaking the hard work of understanding what the real problems are, working with stakeholders to craft a solution and holding parties responsible to see improvements through to a conclusion,” then-SEA Interim President Jason Briefel wrote in a Sept. 13 letter to House lawmakers.

However, the Senate has yet to take it up. Meanwhile, the Senate’s own effort at VA reform, the Veterans First Act, has been delayed. Senate Veterans Affairs Committee Chairman Johnny Isakson (R-Ga.) attributed this to the size and scope of the bill.

“It’s comprehensive and it’s sweeping, and because of that, it’s not going to be the easiest thing in the world to ever pass,” Isakson said at a July 31 discussion at the annual Disabled American Veterans national convention in Atlanta.

In June, Members of the House Oversight and Government Reform Committee produced a postal reform bill intended to  “ensure the efficient and affordable nationwide delivery of mail,” by giving the agency more flexibility for product development, consolidation of mail delivery and agency oversight, and most notably, addresses the pre-funded healthcare mandate.

The bill was referred to the House Subcommittee on Health in July, where it still sits.

In July, feds discovered that premiums for the Federal Long-Term Care Insurance Program would be rising by an average of 83 percent. Immediately, both feds and lawmakers began demanding explanations.

Connolly’s office said in an email that while there are no concrete plans to hold hearings yet, they hope to hear something soon. 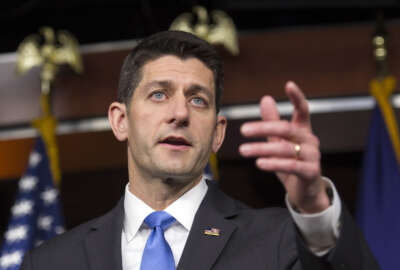