This story has been updated to reflect that the bill failed in the House with a 219-186 vote Monday evening.

Lawmakers failed Monday evening to pass a bill that would have pumped more money into the Veterans Choice Fund, one of several resource streams VA uses to pay for veterans to receive community health care.

The bill, which failed with 219-186 vote, would have replenished the Veterans Choice Fund with an additional $2 billion without an expiration date. But to offset the costs, VA...

This story has been updated to reflect that the bill failed in the House with a 219-186 vote Monday evening.

Lawmakers failed Monday evening to pass a bill that would have pumped more money into the Veterans Choice Fund, one of several resource streams VA uses to pay for veterans to receive community health care.

The bill, which failed with 219-186 vote, would have replenished the Veterans Choice Fund with an additional $2 billion without an expiration date. But to offset the costs, VA would continue to collect housing loan fees and would trim pensions for some veterans living in nursing facilities that are covered under Medicaid.

The extension came in the form of an amendment from members of the House Veterans Affairs Committee, who attached an amendment to a bill previously designed to simply require a report from the VA secretary on employee bonuses.

“This was a bipartisan agreement, and I’m disappointed the concerns raised on the House floor today were not mentioned during what I thought was an open and honest conversation,” House VA Chairman Phil Roe (R-Tenn.) said in a statement after the bill failed. “I will continue to fight tirelessly to ensure the Choice Fund does not run out of money so veterans can continue to access care.”

Members of Congress are on an incredibly tight deadline to find a way to continue the Choice program before the money runs dry, but some Democrats and veterans service organizations opposed the committee’s solution even though they recognized the urgency of their situation.

Funding in the Veterans Choice account is expected to run out between Aug. 7-15, Roe said.

“This is about providing health care for veterans after Aug. 7 or Aug. 15,” he said July 24 from the House floor. “That’s two to three weeks from now when that program will be shut off and veterans in the middle of care will not be able to get care. It’s a simple vote. We can work these other things out in the next few months.”

Yet eight veterans service organizations called on members of Congress to defeat the bill, citing their concerns that lawmakers are scrambling to find a solution to pay for private sector veterans care without a concrete plan to invest more resources into VA and the department’s own modernization.

“We call on House leaders to take the time necessary to work together with Senate leaders to develop acceptable ‘choice’ funding legislation that not only fills the current funding gap, but also addresses urgent VA infrastructure and resource needs that led to the creation of the ‘choice’ program in the first place,” the VSOs wrote in a July 22 statement.

Some members of Congress are concerned by the VSOs’ opposition. They say this new agreement bypasses the bipartisan, bicameral and in-depth discussions they expected they’d have to redesign the Veterans Choice Program entirely.

“In light of opposition that is rarely seen from the VSOs in such opposition to this … it’s the spirit of what it takes to legislate that is missing around here,” House VA Committee Ranking Member Tim Walz (D-Minn.) said.

Yet other Democrats are also concerned. They fear this approach sends a broader political message about the path forward in paying for veterans’ health care.

“It is time for us to recognize that private care is not the panacea for the complex challenge of caring for our nation’s veterans, and that the VA’s role must remain foundational to veterans’ care,” Rep. Mark Takano (D-Calif.) said on the House floor. “This bill does not reflect that reality.”

Both Republicans and Democrats seem to agree: they received poor communication and a bad prediction from VA. The department told Congress in early June that it was running out money in the Veterans Choice Fund. Without the congressional authority to transfer funds from one account to another, the department predicted it would run out of money to pay for veterans’ care in the community before the end of the fiscal year.

Now, VA has only a few weeks left of funding for the program.

If the Choice fund runs completely dry, veterans will wait longer for appointments and won’t be able to return to their private sector providers for care, Dr. Poonam Alaigh, acting VA undersecretary for health, told the House committee in June.

Some veterans and Choice providers had already begun to experience the residual effects of the funding shortfall.

Dr. Dustin Siena, a Choice provider in Camarillo, California, provides acupuncture services to veterans. He said the program has worked well for him and for veterans, who have access to an alternate pain treatment.

Meanwhile, the House is also expected to vote this week on a fiscal 2018 appropriations bill for VA. The House bill gives the department $182.3 billion in discretionary and mandatory funding, an increase of about $5 billion over the previous year’s budget. Specifically, about $1.6 billion would go toward community care.

But Democrats and VSOs are concerned the president’s budget indicates a desire to make the VA Choice Program a mandatory one, even though the department indicated its desire to overhaul and redesign the way veterans receive health care from the private sector.

“It is not a budget for privatization,” he said in a July 24 speech at the Veterans of Foreign Wars National Convention. “The president and I agree that privatization is the wrong path for the VA. But we do want to give veterans greater choice in decision making, and we do want to help strengthen the VA system.”

VFW was one of the eight VSOs that expressed their concern with the House legislation.

As the Choice program runs out of money this year, VA reiterates need for a redesign 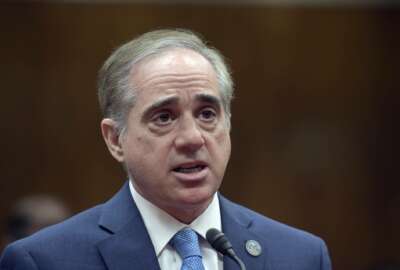