4 NDAA amendments to watch on the House floor this week

The 2018 House defense authorization bill made it out of committee and that means all 435 members of the House will get a crack at the bill when it gets to the floor.

Representatives already submitted their amendments to the House Rules Committee for the bill and Federal News Radio compiled a list of the amendments you should watch when they get to the floor.

The 2018 House defense authorization bill made it out of committee and that means all 435 members of the House will get a crack at the bill when it gets to the floor.

Representatives already submitted their amendments to the House Rules Committee for the bill and Federal News Radio compiled a list of the amendments you should watch when they get to the floor.

There’s no guarantee they will pass, but if they do they will make it into the final version of the bill. The amendments must first be ruled in order by the Rules Committee before they make it to the House floor.

The military is struggling to keep service members with cyber skills in the military, despite growing demand for cyber operations.

Rep. Pete Aguilar (D-Calif.) introduced an amendment to help with that issue.

The amendment gives a lot of discretion to DoD on the application and asks the department to provide guidance on criteria for the funds, measurable objectives and the process under how to apply for funds.

The amendment makes clear that the funds should not be used for salaries, but rather for incentive packages.

“The challenge I think we are going to have in IT may not be exactly in the budget, it’s going to be the retention of the IT workforce,” Halvorsen said. “That’s going to come down to an economic decision. I happened to be in [Silicon] Valley last week and Google announced they are raising the pay for cybersecurity by another 20 percent. That’s going to keep impacting our ability to attract talent. … What keeps me up at night? That’s probably the answer.”

Neither of the original 2018 House or Senate defense authorization bills added extra incentive pay for cyber service members. House Armed Services Committee aides said they thought the military had enough tools at its disposal to deal with the issue.

That moment changed the way government workers thought about cybersecurity.

The new position would coordinate actions relating to the release of Social Security numbers, personal financial information, addresses and other information.

The office would ensure victims receive an appropriate response and assistance from the government and would make sure there is synchronization between intelligence and responses among enforcement agencies to cyber attacks.

DoD is supposed to be auditable by 2018, everyone knows that won’t happen. But that’s not keeping Congress from holding the department’s feet to the fire about it.

Rep. Michael Burgess (R-Texas) wants to give DoD less than a month to submit a report ranking all military departments and defense agencies in order of how close they are do being auditable.

DoD’s new comptroller, David Norquist, expressed his enthusiasm for the department’s need to be auditable during his confirmation hearing in June.

“Let me address it directly: it is time to audit the Pentagon. For seven years or more, the department has engaged in audit readiness, preparing for a full-scope audit without starting it. This approach has diminishing returns,” Norquist said. “I recognize it will take time for the department to go from being audited to passing an audit. Everything you have heard about the size and complexity of the department is true. And this legitimately makes any endeavor, including an audit, harder. But that is not a reason to delay the audit. That is a reason to begin.”

In the Trump era, politicians and the media are keeping a closer eye on business dealings with the government and political donations.

The 2018 NDAA is no different. Rep. Keith Ellison (D-Minn.) submitted an amendment to the House Rules Committee that would require contractors and subcontractors to disclose political contributions.

The amendment states any person with 10 percent ownership of a company, officer, affiliate or director must disclose all electioneering communications, independent expenditures or contributions in the past election cycle. That includes contributions to political action committees.

Ellison made a run as a more progressive option for chair of the Democratic National Committee earlier this year.

DoD comptroller nominee: ‘It is time to audit the Pentagon’ 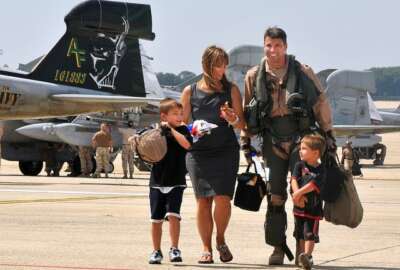