The 2016 defense authorization bill officially passed through Congress Oct. 7 and now awaits what one defense analyst says is a 99 percent chance of being vetoed by President Obama.

The National Defense Authorization Act (NDAA) has become a symbol of a wider debate over multiple budgeting issues that have put Congress, political parties and government branches at odds over the past year.

“The fate of the NDAA becomes tied to the resolution of the budget impasse in some way acceptable to both sides,” said Andrew Hunter, a senior fellow at the Center for Strategic and International Studies.

Hunter said a veto override seems unlikely considering it will need the votes of two-thirds of both the House and the Senate. While the Senate passed the bill meeting that criterion — 70-27 — but the House came 20 votes shy of being veto-proof in its vote last week.

“For him to veto what is fundamentally a budget bill, a policy bill, in the name of cost is inappropriate,” Chairman of the Senate Armed Services Committee John McCain (R-Ariz.) said in an Oct. 7 speech.

President Obama threatened multiple times to veto the bill over the way it funds the Defense Department.

The NDAA uses an emergency contingency fund called overseas contingency operations (OCO) to pay for base budget items like operations and maintenance. OCO is not subject to sequestration caps, therefore Congress put $38 billion in the bill to fully fund the Defense Department without going over the mandated caps.

President Obama sent Congress a budget that exceeded the sequestration caps in hopes it would come to a deal to end or at least put off sequestration.

Military officials have said that using OCO funds to pay for base budget accounts is detrimental to future planning. OCO money can only be used for one year and therefore makes it impossible for the military to plan further ahead with its budgeting.

“The bill attempts to evade the question of overall fiscal responsibility with this OCO gimmick, which is objectionable to me and others in other federal agencies, and I think it ought to be objectionable to the taxpayer and certainly to the warfighter,” Defense Secretary Ashton Carter, who advised Obama to veto the bill, said Sept. 30. “These are not mysteries to anyone. I think we’ve been very clear about our position on a veto.”

The NDAA has been signed into law for 53 consecutive years and has been vetoed under Presidents Carter, Reagan, Clinton and George W. Bush. The difference is the reason for the vetoes was easily solved, said Justin Johnson, a senior policy analyst at the Heritage Foundation.

Johnson said the NDAA is being vetoed over something it cannot touch — domestic spending.

“The President won’t increase defense spending without spending increases for his domestic priorities. Because the NDAA can’t address the domestic budget issue, the bill will likely be stuck in limbo until the larger budget debate is settled,” Johnson said in an Oct. 7 email.

Defense acquisition chief Frank Kendall said Oct. 6 that he thinks Congress will send back a bill that looks similar to how it does now when it comes to policies.

The bill calls for major acquisition reforms by giving more power to military services chiefs to run their own acquisition programs.

The bill puts constraints on closing Guantanamo Bay and on another round of Base Realignment and Closures. 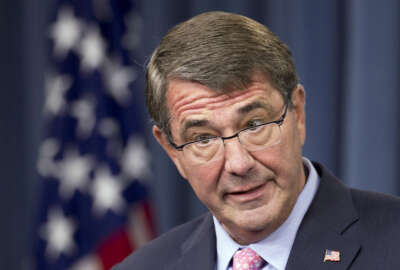