As the Marine Corps is doubling down on cyber and information warfare, the service has made it clear it is willing to take force structure cuts to fulfill its mandates.

If the Marine Corps does need to take a hit in the number of forces it retains, the younger, junior officers and enlisted Marines will be the first to go, said Marine Corps Commandant Gen. Robert Neller.

As the Marine Corps is doubling down on cyber and information warfare, the service has made it clear it is willing to take force structure cuts to fulfill its mandates.

If the Marine Corps does need to take a hit in the number of forces it retains, the younger, junior officers and enlisted Marines will be the first to go, said Marine Corps Commandant Gen. Robert Neller.

“It takes 22 years to grow a colonel, so if we have to take structure we’ll probably take it from the more junior Marines because we can replace them because they are younger,” Neller said during a Feb. 11 speech at the Atlantic Council in Washington.

That makes a large chunk of the Marine Corps vulnerable to cuts. Sixty percent of Marines are under the age of 25 with a ratio of 9.5 enlisted Marines for every one officer, Neller said.

Neller said he still doesn’t know what kind of makeup the Marine Corps will need yet for its more cyber-focused force, but it should know by this summer.

At that point, it will take an undisclosed amount of time before that makeup is realized.

“I believe that we are going to make the change and hopefully we’ll get into the 80 percent ring as far as the right numbers and the right capabilities and it will take us a while,” Neller said.

The Marine Air-Ground Task Force (MAGTF), the principal organization for Marine operations, has expanded from just air, sea and land to now encompass cyber and space.

“We have to be able to look at this future force. We know that in the information warfare area, cyber, leveraging space capabilities, ambiguous warfare, cy[ber] ops; that area there that you are seeing a lot of proliferation in, we know we’ve got to invest in that area,”  Deputy Commandant Lt. Gen. Robert Walsh said in October.

That investment comes at a time when the Defense Department’s budget is still lower than it wants and future funds are uncertain.

The Marine Corps has said cyber and information warfare are a top priority and reaching its goal can be realized in one of two ways: The Marines can ask for an end strength increase to grow the force in a more cyber-centric way or it can recommission current positions.

Considering the President’s 2017 Defense budget request is below what DoD says it needs, an increase in force strength is unlikely. That’s especially true when force strength for other services has been trending downward. DoD mandated the Army to reduce its force strength from 490,000 active duty troops to 450,000 by 2018.

Overall, the budget asks for $583 billion, including $59 billion in overseas contingency operations funds.The 2017 budget the Defense Department sent to Congress on Tuesday was $17 billion smaller than the one officials were planning a few months ago.

The top-line figure is roughly $3 billion more than Congress approved for this year, but almost all of the increase would be eaten up by the 1.6 percent pay increase the Obama administration is requesting for service members and civilians, meaning the budget is effectively flat.

That leaves the Marine Corps with the option of losing or remaking its current force structure to modernize its cyber component. Either way, considering the costs of cyber equipment and modernization, the Marine Corps force is likely to decrease.

“An infantry battalion may look a little bit smaller in some ways, but you may add more cyber information warfare capabilities, so that’s definitely an area that we are looking at,” Walsh said.

Neller said it takes two years to train a Marine in cyber and the course to become a cyber Marine has a high attrition rate.

He added that the Marine Corps is looking into the reserve components for people that have cyber experience in civilian life and trying to figure out how to get them more involved.

“Instead of three individual stovepipes kind of doing their own thing, [this] pulls together everything from a capabilities development standpoint,” Walsh said. “It all comes back to that combat development integration, a lot of people doing good things, but how do you integrate it together?”

In January, Neller released orders to the Marine Corps about modernizing the force, notably by leveraging and evolving technologies.

“We will pursue technologies that enhance our warfighting capabilities such as unmanned aerial systems and robotics, artificial intelligence and autonomous technologies that provide tactical and operational advantage,” the order stated. 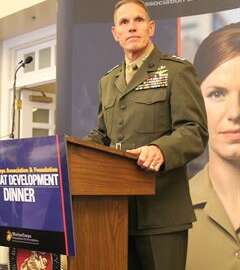