The Pentagon’s startup-style outfit for reaching out to innovative companies may have cracked the code for speeding up DoD’s famously ponderous acquisition system, racing through its first round of a dozen small technology procurements in an average time of about 60 days.

The next questions are how large its new processes can scale and to what extent they will survive into the next administration.

The Defense Innovation Unit-Experimental (DIU-X), now in its second iteration after having set up...

Listen to Jared Serbu on the Federal Drive
Download audio

The Pentagon’s startup-style outfit for reaching out to innovative companies may have cracked the code for speeding up DoD’s famously ponderous acquisition system, racing through its first round of a dozen small technology procurements in an average time of about 60 days.

The next questions are how large its new processes can scale and to what extent they will survive into the next administration.

The Defense Innovation Unit-Experimental (DIU-X), now in its second iteration after having set up hubs in Silicon Valley, Boston and Austin, awarded a total of $36 million in contracts since its May restructuring via a an acquisition technique it refers to as a Commercial Solutions Opening (CSO).

The process leans heavily a significant expansion of “other transaction authorities” Congress granted to all DoD components in last year’s Defense authorization bill, including waiving requirements to comply with government cost accounting standards, giving more flexibility to negotiate intellectual property rights on a project-by-project basis, and adding the ability for DoD to use the speedier OTAs for production of fielded systems – not just prototypes – as long as it’s dealing with small or “non-traditional” companies.

Crucially, out of the $36 million spent on the 12 projects the office initiated since beginning the CSO process, $20 million of the funding came from military services and agencies who were looking to solve specific problems but may not have been willing to try an alternative acquisition approach without assistance and topcover from DIU-X, said Raj Shah, its managing partner.

“Having the ability to use some of our funds in conjunction with the services helps for a couple reasons,” he told reporters last week. “It buys down some of the risk when working with companies they may not have worked with before. Working at the speed of business is critical to our success, and having a pool of funds of our own helps get projects started earlier than they would have otherwise. There are cases where we’ve scoped out a project and we know the full magnitude of the resources required, so we can front some of the investment to get it started while our partners work on the back-end contract.”

However, the DIU-X awards haven’t been solely about gaining access to companies who wouldn’t normally do business with the Defense Department.

Indeed, the largest of the CSO awards — for $12.7 million — went to Tanium to help build a cyber situational awareness platform that’s scalable enough to help the DoD Chief Information Officer and the Army simultaneously monitor DoD’s millions of computer endpoints in real-time. While Tanium’s business is mostly commercial, its products are already widely deployed across DoD and the intelligence community, and earned formal approval to run on DoD networks several months before the CSO process began.

The second-largest award, at $12.6 million, went to Composite Engineering and Kratos. On behalf of U.S. Strategic Command, they’ll conduct research into high-speed drones that can autonomously work alongside fifth-generation fighter aircraft. But neither of those firms appear to have been averse to doing business with the government outside of the DIU-X process: In fiscal 2016 alone, Composite won 33 separate contracts totaling $42 million; Kratos won 126, worth a collective $40 million.

Many of the remaining CSO contracts were to small companies with little or no track record in government procurement, but the awards were strikingly small: 8 of the 12 were for $1 million or less.

But Shah suggested many of those represent extremely promising technologies that the government would not normally be able to avail itself of, had it used its traditional RFP process.

“There are several impediments that have prevented these companies from engaging with the Department in a way that we’d like, and first and foremost is speed,” he said. “The CSO is a reliable and transparent process where a company can quickly understand if their proposed solution is valuable to the department or not, and then what the next steps are.”

And speed is especially critical for small startup firms whose are reliant on successive rounds of investment from venture capital firms, said Sean Singleton, the DIU-X director for engagement. Those companies tend to see their very existence as reliant on growth in a commercial marketplace, not potentially-risky bids on government contracts,

“These innovative companies don’t have time to dissect the acronyms. For them, the Department of State is the same as DoD, and they don’t view us as a stepping stone to their next round of investment,” he said. “To that end, I think one of the things we have to do is understand their commercialization objectives in a way that makes sense to them. We have to align our use cases with their objectives so that they don’t have to deviate from their commercialization glidepath. That’s how you can find success.”

The unit is also looking for ways to use the Defense Department’s own assets and capabilities as a convincing point to small startups who are primarily interested in speed-to-market, said Maj. Gen. Robert Wheeler, a retired Air Force officer who, until recently, was DoD’s deputy CIO for command, control, communications and computers and now works as an advisor to DIU-X.

“DoD brings a lot of potential things to the table. I won’t name the company, but in one case where they weren’t sure they wanted to work with us, we said, ‘You want to test your stuff, right? We have an open air range for you do to all that testing, and we’ll let you use it. That gets them to commercial markets faster than anybody. We can bring spectrum, we can bring airspace, we can bring dynamic following, all these things that nobody else has.”

But even DIU-X’s strongest advocates aren’t yet ready to predict how extensive or influential its business processes will be in a Defense contracting marketplace that totals about $290 billion per year. They said the answers will depend to a large extent on the unit’s success going forward, but the Pentagon only requested $40 million in funding for the office in the 2017 budget.

“We have 20 more projects in the pipeline, but the ramp up from there depends on the number of problems we get,” Wheeler said. “We’re still learning, and hopefully what we’re learning will be integrated into the laws and rules and the ways we do business. I think this has awakened a sleeping giant. We’ve got to do this differently, and I think every person in DoD understands that.”

DIU-X’s standup and subsequent expansion was led and enabled directly by the personal involvement of Defense Secretary Ash Carter, whose time in office will come to a close in January when a new president is inaugurated.

Asked to predict whether the innovation outposts would live beyond Carter’s tenure, Shah offered a qualified yes.

“Innovation and access to commercial technology is something the department has talked about for a long time,” he said. “Clearly, Secretary Carter’s interest and commitment has helped us to get started, but I think no matter who’s the secretary, our national security will rely in significant part on our ability to access the centers of innovation we have in this country. I’m quite optimistic that the next secretary will see the value of these engagements and see them as part of a quiver of tools to achieve their mission.” 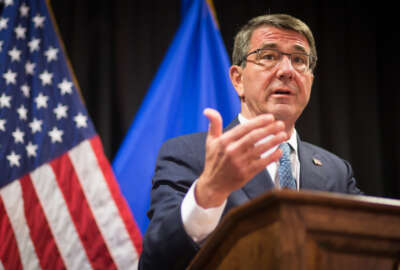