DoD ready, but not happy about another continuing resolution

Congress passed yet another stopgap measure on Thursday to keep the government functioning, averting a Friday evening government shutdown and leaving all federal programs at last year’s funding levels for another few weeks.

It’s an outcome the Defense Department says it can weather, but not without problems.

“Let’s say you were having to do more, but someone said, ‘You have to operate at the budget you had last year.’ You’re just going to defer as...

Congress passed yet another stopgap measure on Thursday to keep the government functioning, averting a Friday evening government shutdown and leaving all federal programs at last year’s funding levels for another few weeks.

It’s an outcome the Defense Department says it can weather, but not without problems.

“Let’s say you were having to do more, but someone said, ‘You have to operate at the budget you had last year.’ You’re just going to defer as many choices as you can whether it’s military construction, maintenance. You just kick the can down the road on as many of those things. If you don’t have the money you have to find work around. That’s a fact of life. It’s painful,” Patrick Shanahan, the deputy Defense secretary told reporters at the Pentagon Thursday. “It’s bad, but the other side of this is we will be able to do our job.”

Shanahan did not allude to any anomalies in the continuing resolution that DoD would need to continue operating. Anomalies are small increases in the budget for certain programs or areas that are needed to keep vital missions on task.

“I am profoundly disappointed that leadership in Congress and the White House failed to reach agreement on a budget deal,” he said in a statement. “As we wait another four weeks in hopes that Congressional leaders negotiate a compromise, the military will work overtime to keep an already dire situation from getting worse. Readiness will continue to decline. Service members will not receive scheduled training. Ship maintenance backlogs will grow. All of this in the face of a world that only gets more dangerous and where threats continue to rise.”

Apart from the budget situation, Shanahan touched on several other topics during a brief Q&A session with reporters, including DoD’s preparations for the creation of a new chief management officer position, a role created by Congress as part of a larger department-wide restructuring.

Shanahan announced that the current deputy CMO, Jay Gibson, will fill the new role on Jan. 2.

“To a certain extent, we will bifurcate the operations here and that’s key to having a chief management officer,” Shanahan said. “We don’t leverage to the full extent technology, innovation and our people to the manner that we could fully realize. Think about each of the services approaching and solving back office problems differently, but they are really important, like all the human resource activity and financial activity. We train different people who have the same set of skills to do their jobs differently. A good portion of Jay’s responsibilities are to help us transition organizationally and technically. You’ll hear things about the cloud, that’s an underpinning of the work he’s doing as the chief management officer, but also how do we get more consistency in the way we utilize the team.”

Shanahan added that DoD will better integrate the fourth estate into DoD. The fourth estate is defense jargon that generally refers to the office of the secretary of Defense and other organizations outside the four military services.

Current law gives the CMO independent authority to order the secretaries of the Army, Navy and Air Force to implement reforms on matters like business transformation, business planning, performance management and information technology — powers the DCMO doesn’t have in its current role as an internal adviser to the deputy defense secretary.

Congress wants the new CMO to be something of an outsider. Law requires him or her to be appointed “from private life,” to have experience running large, complex organizations and to have been working outside the military for at least seven years.

Congress hopes the CMO can shape up DoD’s bureaucracy and make it function faster and cheaper.

The current leaders of the congressional defense committees have an intense interest in reducing what they view as wasteful spending within DoD’s business operations, particularly within its headquarters and other “back office” functions. Another provision of the bill placed new limits on the numbers of civilian and military personnel who can be assigned to OSD, the Joint Staff, and the senior staffs of each of the military services.

Several members have also expressed outrage stemming from an article in the Washington Post last week, which claimed that the Pentagon had “buried,” ignored and expunged from its website a 2015 Defense Business Board Report that found DoD could cut $125 billion from its support and logistics functions.

Lawmakers further expanded the role of the CMO in the 2018 defense authorization act, to the chagrin of Defense Secretary Jim Mattis.

The law gives the CMO oversight, direction and control of the business focused defense agencies. It also gives the CMO more of the chief information officer’s roles and responsibility over coordination of enterprise governance and data management.

“There are things that the chief information officer does that are not dissimilar to the things CIOs in other federal agencies do. Then there is this information warfighting function that pertains to space control, cyber, electronic warfare and information assurance, spectrum management. Things that are very uniquely DoD information warfare functions and I think the thinking became these are probably more than one job,” a Senate Armed Services Committee aide said.

Mattis wrote to Congress in October asking them to pull back on the measure.

He stated DoD is still working on the CMO position and asked Congress to give the Pentagon time to onboard senior leaders, implement previously mandated changes and bring needed reforms to DoD before Congress expands the CMO role.

DoD will have a new face on Jan. 2 in the acquisition, technology and logistics office as well. Senate Armed Services Committee staffer Ben FitzGerald will lead the office of strategy and design.

The office will be the hub for the acquisition office split that is set to begin next year.

Congress mandated DoD split its acquisition office in two so one department can focus on day-to-day activities and policy while the other can work on research and engineering. 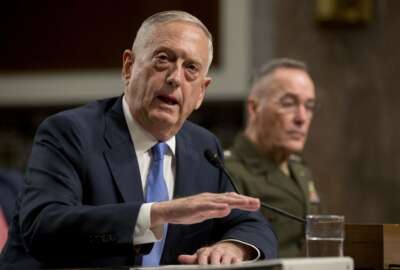 DoD ready, but not happy about another continuing resolution