The Veterans Benefits Administration is processing more disability claims at a faster rate thanks to an updated processing system, prioritized initiatives and employees doing a lot of work with limited resources.

VBA Under Secretary Allison Hickey told the Federal Drive with Tom Temin that roughly 98,000 claims that are older than 125 days — a sub-100,000 case milestone reached in late August — have been reduced to about 91,000 as her department continues to chip away at the...

The Veterans Benefits Administration is processing more disability claims at a faster rate thanks to an updated processing system, prioritized initiatives and employees doing a lot of work with limited resources.

VBA Under Secretary Allison Hickey told the Federal Drive with Tom Temin that roughly 98,000 claims that are older than 125 days — a sub-100,000 case milestone reached in late August — have been reduced to about 91,000 as her department continues to chip away at the caseload. Two years ago, the backlog reached its peak at about 611,000 claims, Hickey said, so the new numbers reflect an 85 percent reduction. The inventory of disability claims, regardless of age, total about 356,000 claims down from the record high of 884,000 in 2012.

“I wouldn’t tell you it’s been easy at all, but I would tell you I’ve been committed the entire time,” Hickey said. “I also knew we were well on a very good, strong path to do what we have done, which is to bring a historic backlog of disability claims down to historically low levels. And I knew that we could do it. I knew we’d already proven we had the right plan, a transformation plan that included a combination of people-initiatives, how we’re organized to do the work, process-initiatives using a lot l like Lean Six Sigma, process improvement opportunities, and technology like we’ve never had before.”

She added the accuracy of employees processing claims has risen  to 91 percent from 83 percent at the claim level.

Despite the higher volume and faster processing time, Hickey said, “We’ve not traded or sacrificed quality.”

The quality of each of the department’s regional offices is checked about every week. The organization takes a sample of claims and reviews eight categories of errors, Hickey said. These categories range from something like writing the correct effective date and ensuring all the right evidence is collected before reviewing a claim.

“We have never before projected that data to everyone, but we are now going to,” Hickey said. “It’s a good thing to do that, build trust in the accuracy levels of our claims.”

Hickey said all but one category are above the 98 percent accuracy level for the department’s offices, while about half of those are above 99 percent. The one category that is not above 98 percent  is only behind by 0.03 percent.

Hickey said the appeals rate for disability claims remains at a steady 11 percent-to-12 percent, but while only about 980,000 claims were completed in 2009, today the department is completing about 1.4 million a year.

A rise in both accuracy and volume can be attributed to shifting most of the claims process to a digital format, and giving employees “the right kind of enabling capability,” Hickey said.

“Now we have an enabling system that’s all digital,” Hickey said. “We dial through 99.6 percent of all those claims in a paperless environment. We use rules built into the system that helps the decision maker. We also have things that auto-populates, so people aren’t typing and making transposition errors — that becomes a problem later on for the veterans if they file another claim. All of those things have us on average, this year, every single employees is about 81 percent more productive than they were last year.”

The benefits department was handling enough paperwork to equal 200 Empire State buildings, Hickey said, so part of the overall strategy was how to convert that immense amount of information to a digital form.

That was completed, she said, and now not only does physical mail get rerouted directly to scan sites at the regional offices where it’s digitized, the department is also moving forward with QR scan codes on letters sent to veterans. That way when a veteran sends back a form, it is scanned and automatically is loaded into their electronic file, Hickey said.

The “agile development” of this system did take some time, Hickey said. It involved developers working closely with the employees who would  be using the new system, as well as live testing, no shortcuts, and regular updates and status reports.

She said the system does still have a human element to it.

“Because this is an adjudicative process it still requires the human in the loop,” she said. “But we are taking up to the point of really hugely enabling our decision-makers with decision-quality information that they are not having to generate themselves, that’s generated into a system, so they can make that decision better informed and faster.”

While the streamlined, digitized “transformation plan” for disability claims is helping the department his new milestones, parts of it were the result of other processes and lessons learned from other areas of VBA, Hickey said.

About eight or nine years ago, the home loan guarantee cases were moved to a digital environment. The department also was working on processing cases for the Post 9-11 GI Bill.

“There was a lot of noise, and rightfully so, from veterans and from others that we were taking too long to get veterans into school and get them their living stipends, because that was a new program started in 2009, we’d been trying to build a system while we were flying it. That just wasn’t working very well,” she said. “But I’d say September of 2012 we hit a ‘wow’ moment, when we put functionality and rules into the system, that allow a majority of claims … to come in and flow through the process and get completed in a single day with no human intervention.”

That’s possible because education does not require adjudication. Now most education claims are done in about six days, she said.

“We got that one done and shifted all our focus, all the lessons we learned in doing that system, over to compensation claims. That’s probably our most complex thing to do in our business areas,” Hickey said. “Are we learning stuff that transposes over to other broken processes in the VA? I would say yes. I certainly think the lessons of some of the requirements and the scenarios we’ve built in order to get to the requirements, lend themselves to how can it be done in other areas.”

But Hickey stopped short of saying the new digital management system was a solution for all the department’s woes, since there are worries that piling too much on could slow the process down or create too much of a risk on one system.

What veterans and their families have to look forward to, however, is the addition of pensions into the management system. Veterans will also have the opportunity to view electronic records.

“They’re going to see their medical record in there, they’re going to know exactly what we have —they’re going to be able to see the letter they sent us two weeks ago is now in there and yes we’re using it, the evidence they uploaded through their e-benefits file is directly in there,” Hickey said. “So they’ll know and they won’t have to worry do we have that thing, are we making a decision with that piece of paper, that piece of evidence in mind.”

Hickey said she shared the progress of her department with oversight leadership in Congress. She said she thought they had more confidence in her department in handling disability claims, though she is also aware of their concern for appeals.

But she said if Congress wants to improve appeals, it can either change the law, which she said she understands is perhaps too politically hot to touch, or give her more resources. Hickey said with just 1,000 more people she could bring the appeals process down to about one year.

“I understand,” Hickey said. “Please then, give me a lot more people to do a really inefficient and really ineffective process  because at the heart of the matter is our delivery of benefits and service to veterans.” 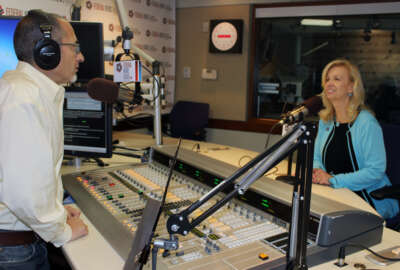