A Merit Systems Protection Board judge has reversed a decision by the Department of Veterans Affairs to demote one of its senior executives for abuse of power.

Kimberly Graves “failed to exercise sound judgement” when she took a VA position previously filled by an employee she recommended for reassignment, wrote MSPB Chief Administrative Judge Michele Schroeder in her bench decision. But because no one in her chain of command said anything about it, nor was anyone else...

A Merit Systems Protection Board judge has reversed a decision by the Department of Veterans Affairs to demote one of its senior executives for abuse of power.

Kimberly Graves “failed to exercise sound judgement” when she took a VA position previously filled by an employee she recommended for reassignment, wrote MSPB Chief Administrative Judge Michele Schroeder in her bench decision. But because no one in her chain of command said anything about it, nor was anyone else similarly punished, the VA’s decision to demote her was “unreasonable.”

“Knowledge and acquiescence of Ms. Graves’ reassignment to St. Paul by Ms. Graves’ chain of command are readily apparent and if no one in her chain said, ‘wait, this will not look right,’ when they approved her reassignment, how can a penalty be imposed against Ms. Graves for not saying that,” Schroeder wrote in her decision.

The ruling came after three days of testimony in a Chicago, Illinois courtroom.

“Ms. Graves is happy the action was reversed, and she looks forward to continuing her life’s work serving veterans,” said Graves’ attorney Julia Perkins, a partner at law firm Shaw Bransford & Roth, according to reports from Government Executive.

In an emailed statement from the VA, the agency said that Graves “exercised her right to appeal. Because VA has not yet received the judge’s final decision in that case or in the similar appeal filed by Diana Rubens, VA is unable to comment specifically about either action at this time.”

Graves, along with Rubens, were senior executive employees  for the Veterans Benefits Administration. They’ve been under VA’s microscope regarding an alleged relocation scandal that resulted in the government paying roughly $400,000 for them to relocate within the department.

Both women were named in an IG report issued Sept. 28.

Rubens also appeared in court this week, though her case was heard in Philadelphia. A judge has until Feb. 1 to render a decision, which will also be posted to MSPB’s website.

The IG report stated that Rubens and Graves inappropriately coerced two other directors to leave their positions when they were not interested in leaving, so their vacancies would be created for Rubens and Graves. Those two employees were Robert McKenrick, currently the director of the VBA Los Angeles regional office, and Antione Waller, the current director of the Baltimore VBA regional office.

Schroeder said that based on her findings, it was clear Graves did not force the employee to take the St. Paul position, and it was clear Waller was going to be a good fit for the Baltimore office.

“These conclusions, however, do not assist in deciding the charge brought against Ms. Graves,” Schroeder said. “As I indicated earlier, Ms. Graves is charged with creating an appearance of impropriety based on the approvals of Antione Waller’s reassignment to Baltimore from St. Paul and subsequently taking Mr. Waller’s position in St. Paul because she failed to fully extricate herself from the activities surrounding Mr. Waller’s assignment.”

Deputy Secretary Sloan Gibson, Schroeder said, determined that based on Graves’ experience, record and skills, she should still be working for the VA, but “because of her failure to exercise sound judgment by creating the appearance of the impropriety he no longer wanted her to be a member of the agency’s Senior Executive Service. This, in and of itself, was not unreasonable.”

But the testimony of Principal Deputy Undersecretary for Benefits Danny Pummill raised a red flag for Schroeder. The judge said his testimony for the OIG report was “vital to determining whether Graves’ punishment was reasonable. Mr. Pummill’s testimony before me was inconsistent at times with his Office of Inspector General testimony.”

“Not only did Mr. Pummill have full knowledge, but his Inspector General testimony and the admissions of the agency indicate he not only fully supported the actions but thought they were in the best interest of the VA and veterans, at the time the actions occurred and now,” Schroeder said. “There was no evidence whatsoever that at any point Mr. Pummill said, ‘time out everyone, this doesn’t look good.’ Or to be more articulate, Ms. Graves and/or the agency are creating the appearance of an impropriety because she was the recommending official as to Mr. Waller’s reassignment to Baltimore and she is now taking his prior position.”

Schroeder said in her decision that the VA said it had set a target date of Dec. 31, 3015 to consider taking appropriate action against Pummill. But as of late January, “it has not issued any disciplinary or adverse action against Mr. Pummill in relation to the events arising from the Office of Inspector General report. And although having this knowledge, the agency proceeded to charge and discipline Ms. Graves. Deputy Secretary Gibson admitted that he believes Mr. Pummill may have had an opportunity to advise Ms. Graves to extricate herself from the process but stated whether that would go to lacking sound judgment is different. I do not see it as different.”

Both women were demoted in November, but their demotions were rescinded after a paperwork mix-up. The VA then reissued the demotions. Both received unspecified pay cuts, according to the Associated Press.

The AP reported in late December that the U.S. Attorney’s Office for the District of Columbia would not be pressing criminal charges for either woman. 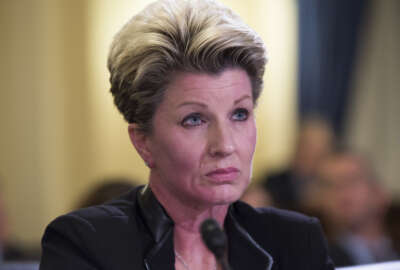