The U.S. Coast Guard is still knee-deep in rescue and response efforts as the third major hurricane in three weeks hits the U.S. and its territories.

But the agency has already learned a thing or two from its initial response efforts and is thinking about new tools it should develop to better prepare for future disasters.

When 911 call centers quickly overloaded in Houston, residents in the area quickly took to Facebook and Twitter to ask for help.

The Coast Guard isn’t accustomed to sending a helicopter or a flood punt boat to a rescue scene based on a single Facebook post or Tweet, but the agency quickly learned that it needed to adapt.

It set up an impromptu call center at the agency’s command center in Washington, Coast Guard employees fielded calls for help on social media. Then, the agency quickly trained its first responders to use a geospatial application that sends direct search and rescue locations to them.

“That’s how we rescued the 11,000 people, leaning in on how the public was self-selecting to use social media, because they couldn’t get through on 911 calls,” Vice Adm. Sandra Stosz, the Coast Guard’s deputy commandant for mission support, said Sept 12, at the AFCEA Homeland Security Conference in Washington. “We decided for the next disaster, we can’t be a pick-up game. We have to be looking in advance what we need to develop.”

A good, first step would be some sort of national guidelines that describe how agencies can and should use social media to help federal agencies during presidentially declared natural disasters, Stosz said.

“We need to come up with some kind of required national protocol for social media for geo-tracking and locating and targeting search and rescue,” she said. “We don’t have that yet.”

In past rescue and response situations, pilots had to search for a first responder waving a flashlight in the dark to zero in on rescue situations. Now, Coast Guard pilots used electronic flight bags during Hurricane Harvey rescue and response. The flight bags are relatively new and have tablets that let pilots see and navigate around power lines and towers, Stosz  said. New mapping apps let the pilots find specific street addresses and other locations, and the agency can send updated communication plans or operational hazard briefings to them directly in the air.

Stosz said the agency hopes it can put more of these electronic flight bags in the hands of its marine inspectors and other employees in the field. She’s also looking to deploy wearable endpoint devices that let first responders use voice and image recording to document their work.

Stosz is also thinking about other common apps that her employees likely use in their everyday lives that the agency could adopt and deploy in rescue situations.

“We need something like Waze, so that the millions of people in Houston can just drop in their info in some kind of Waze program,” she said. “We’re flooding here, we’re noticing this, and let that be another tool for government rescue responders to use. We’re putting all of this into lessons learned on where to take social media, this application opportunity, in the future.”

Recent hurricanes also have the Coast Guard thinking more about mobility. The agency often has to meet its operational requirements in harsh conditions, and tough storms make it challenging for first responders to meet those needs in a stationary command center, Stosz said.

Though Hurricanes Harvey and Irma are challenging the way the agency thinks about its communications and physical infrastructure strategies, Stosz said the tough questions are welcome.

“Crisis breeds innovation,” she said. “Sometimes it is kind of hard to sit at your desk … and come up with the next great innovation and velocity learning. A good crisis helps. It gives a cause of action.” 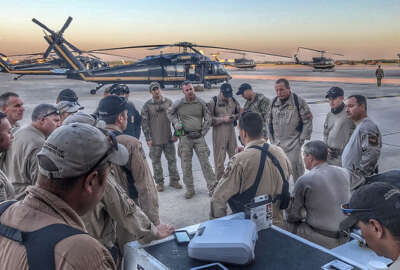