Many if not most politicians at the national level believe that many if not most career civil servants are more likely to be and to vote for Democrats over Republicans. That’s especially true in the metro Washington, D.C. area, which includes solid blue counties in Maryland, the 95-percent Democratic District of Columbia and deep purple Virginia suburbs.

The third includes places like the Pentagon, the CIA and many military installations.

Many if not most politicians at the national level believe that many if not most career civil servants are more likely to be and to vote for Democrats over Republicans. That’s especially true in the metro Washington, D.C. area, which includes solid blue counties in Maryland, the 95-percent Democratic District of Columbia and deep purple Virginia suburbs.

The third includes places like the Pentagon, the CIA and many military installations.

For the past 50 years, federal and postal union leaders, almost without exception, have endorsed Democratic presidential candidates. The largest federal union, the American Federation of Government Employees, has endorsed dozens of House and Senate candidates this year. Union President J. David Cox was a guest on our Your Turn radio show last week and he explained why he thinks most feds are, and should be, Democrats.

He also said the new executive orders from the White House were part of a political revenge campaign to bust unions and privatize many federal operations. AFGE has filed suit to block the executive orders that could cripple union activities in all agencies. Other federal unions, including the National Treasury Employees Union, have also denounced the executive orders.

But Republican politicians might be making a big mistake in writing off federal/postal workers, and retirees, in major federal states like Florida and Texas. And Democrats might make an equally big mistake by taking them for granted, especially in places such as Georgia, a red state where a very tight governors race is ongoing.

So to prove that not all feds, even D.C. based folk, are progressive Democrats check out the following letter from an AFGE local president who’s jurisdiction includes — brace for it — The Kennedy Center:

An open letter to President Trump & the AFGE union

“My name is David Hendrick and I am president of the American Federation of Government Employees, Local 2463, which represents thousands of federal employees working for the Smithsonian Institution in several states and the Kennedy Center. I am also a ‘Conservative,’ former business owner, former vice president/general manager and plant manager for several companies.

“I have been condemned by other union members for being a conservative but I am above all things, logical and fair. When I joined the federal government, about nine years ago I was frankly shocked as this was the first time for me in a government position. Some of the stereotypes I had heard concerning federal employees were correct as I observed a few individuals working at a very slow pace, but I also saw individuals doing outstanding work. But what I did not expect to find was how management was lacking in basic management skills.

“I will tell you the difference from what President Trump is doing to make the workforce more efficient and how I have done things at private companies where I had been brought in to improve efficiencies. Some of the first activities that I perform at a new site [are] listed below:

“What I do not do is what President Trump is doing. I don’t blame the hourly employees, I blame the management whose job it is to manage their workforce. The government does not know how to manage a workforce. You may ask how that is possible.

“In the Smithsonian and in other areas the upper management has never ran a real company. Sure, they may have been the director of another museum, or a college, or a general in the military but not a president or plant manager of an organization that must deal with competition locally and globally to survive. Private companies do not have a rich uncle named Uncle Sam, shelling out millions or billions of dollars each year to run their operations. In the private sector you are forced by necessity to perform.

“[Are] there problems with some of the workforce? Yes, absolutely. Are there problems with management from first line management all the way up to the top? Absolutely! Sure, President Trump attacking the unions and the hourly employees may appease some voters, but they really don’t know the inner workings of the federal government that I have come to know.

“The first action President Trump needs to stop immediately is the stupid waste of government funds by department managers who have money left over in the current budget and then begin telling supervisors to hurry up and spend this money we have left over or our budgets for next year might get reduced. Stop the insanity. Give awards to departments who save taxpayer money, don’t allow them to go on a spending spree for something they really don’t need. I could go on and on about wasteful government spending in purchasing, to building a new building, or just the day-to-day activities that drive me and other employees crazy.

“And to my union brothers and sisters who are at the top of union leadership, I told you before that your strategy of being the rich uncle for Democratic politicians was a failed strategy. When the Democrats are not in power that means the union is not in power. The union has allowed groups to portray and tie the inefficiencies of federal agencies directly to the hourly employees and members of this union. And now that the men and women of this union are under attack by President Trump what does the union leadership do? They ask for more money to back more Democrats for elected office.

“The time has come for the union to stop their expensive and failed policy of being the rich uncle for the Democratic party. Quit allowing others to put our face on the milk cartons of government waste. Encourage our hardworking members to come forward and expose the waste that is occurring in their departments. Let the light of truth shine [on] the wasteful spending, and the managers who never even ran a lemonade stand let alone a billion dollar business. Forget the inspector general —  our members can show you more waste in one day then President Trump can make in a year on his hotels.

“President Trump, members of Congress stop the blame gang and go after the real robbers of taxpayers’ money. When you do that, I will join hand in hand with you to address what some are calling bad union employees. Thank you.”

NHL players can lose as much as 5-8 pounds during an average game, mostly due to water weight. 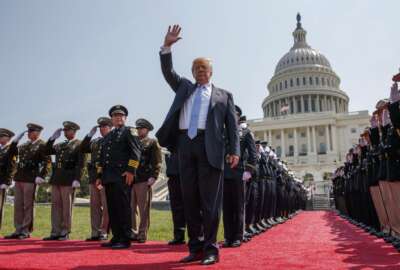 Is President Trump the best recruiter that unions ever had?