The Navy is continuing to press its case to Congress for new authorities that would let the service grant early, merit-based promotions to officers, letting it take a more “surgical” approach to promotions rather than conducting them solely based on rigid schedules.

Navy and other Defense officials tried, but failed to persuade Congress to make the change as part of the 2017 Defense authorization bill that passed in December. But top Navy personnel officials are continuing...

The Navy is continuing to press its case to Congress for new authorities that would let the service grant early, merit-based promotions to officers, letting it take a more “surgical” approach to promotions rather than conducting them solely based on rigid schedules.

Navy and other Defense officials tried, but failed to persuade Congress to make the change as part of the 2017 Defense authorization bill that passed in December. But top Navy personnel officials are continuing to press lawmakers to include the language in this year’s bill. It would allow military promotion boards to place officers “of particular merit” at the top of promotion lists, ahead of their peers. Currently, seniority, according to an officer’s “lineal number,” is the main factor that determines when he or she will move to the next rank after having served sufficient time in his or her current grade.

The current promotion system was set in place by the 1981 Defense Officer Personnel Management Act (DOPMA), and Vice Adm. Robert Burke, the chief of naval personnel, said the proposal is one of several changes the Navy wants to make in order to make the system more flexible.

“We’re still thinking through what we want the ‘to-be’ state to look like in a revised system. All of the services are working through this,” Burke said Tuesday at the annual Sea Air Space conference in National Harbor, Md. “We’re going to continue to learn and explore and put together a more consolidated group of proposals for how we might reshape officer promotion, but in general, we want to have more flexibility from DOPMA to promote more people sooner, but in order to do that you also need flexibility to ask people to go home sooner. We need that tool as well, and we’re looking at how we do that fairly and in a measured manner.”

Both former Navy Secretary Ray Mabus and former Defense Secretary Ash Carter pushed for more flexible military career paths as part of a wide-ranging personnel reform initiative called “Force of the Future.” But Congress rejected the officer promotion legislation precisely because lawmakers viewed it as a piecemeal change, saying that DoD never submitted a broader legislative package that would have implemented personnel reforms in a more comprehensive way.

In a report last month, the Bipartisan Policy Center endorsed the idea of merit-based officer promotions along with several other changes — including a replacement of the military’s up-or-out promotion system with one that lets officers stay in their current ranks as long as they continue to perform well.

But the panel cautioned that DoD would need to make wider reforms in order to make a merit-based promotion system work, including overhauling its performance rating systems to make sure the military services understand who their best performers truly are.

Rear Adm. Richard Brown, the commander of Navy Personnel Command, said the Navy fully recognizes its evaluation system is in dire need of modernization, including by building in new capabilities to measure skills and education rather than just performance.

“Our current fitness report process and its rankings was conceived and developed by a small group of people working for the chief of naval operations in just under 15 months in 1996,” he said. “It’s time to refine our requirements and get an updated system that supports our mission and the folks that are working for us, helps us to identify talent and manage that talent. We’re looking at a few aspirational things, like rating to a standard instead of small, competitive peer groupings. We’re also looking at performance evaluations that are tailored to pay bands. Does it make sense that an ensign’s FITREP looks exactly like a captain’s FITREP? We’re targeting and formalizing counseling as a foundation of the performance evaluation, and providing timely, objective, written and graded feedback to our officers and our sailors.”

But Rear Adm. John Nowell, the director of military personnel plans and policy said the Navy has already shown that merit-based promotion can work within the uniformed services.

Starting in 2015, the Navy implemented the Meritorious Advancement Program within its enlisted force.  That program lets commanding officers, executive officers and command master chiefs select their best and brightest sailors for accelerated promotion.

“We still do Navy-wide advancement exams, we still have the spring and fall cycles, but we wanted to empower those command triads to pluck out their front runners and move them along faster,” Nowell said. “When we started in 2015, MAP made up about 5 percent of the advancements for the year. We’ve opened it up, relaxed some of the rules with respect to timing and eligibility, and in 2017 about 10 percent of our advancements will be via MAP.”

Burke, the naval personnel chief, said he remains hopeful that Congress will authorize a similar system for officers in the upcoming legislative cycle.

“The Senate’s on board — the staff has reiterated their general support for the idea, so we’ve got to go back and reengage,” he said. “It’s probably going to be a couple years before we see a legislative change on that, but we continue to push.”

In the shorter term, he said Congress’ inaction on passing a budget has broad implications for the military personnel system. Leaving a continuing resolution in place for the rest of the year, he says, would have serious impacts.

“Our biggest accounts that have any fungibility to them — the money surge tanks that get impacted the most anytime there’s cash flow issues — are permanent change of station funds and bonuses,” he said. “There’s still a lot of debate on the hill about what the reference point for a continuing resolution would be, but if it’s a continuation of 2016 funding levels, I will be in dire straits. We will be stopping most moves and bonus payments sometime in June. It will be fairly catastrophic, and we’ve told lawmakers that.” 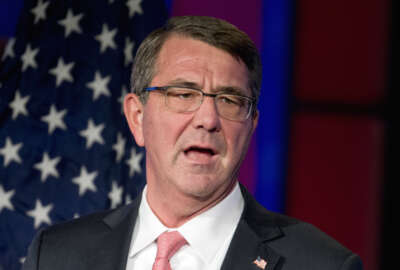