Baitman, the Health and Human Services chief information officer, said in an email to staff that after three years at the helm it was time to look for new opportunities.

Baitman didn’t say if he would move on to industry, just that “it’s best to devote myself to exploring opportunities full time.”

Beth Killoran is the acting deputy CIO at HHS and is likely to be acting CIO until a new person is named permanently.

Baitman spent most of his government career with HHS. First he was CIO at the Social Security Administration for two years. Then in 2011, he joined the Food and Drug Administration as an entrepreneur-in-residence, working on how best to fast track low-risk medical devices.

Throughout the last three years, nearly every large agency CIO turned over and Baitman became the most experienced one in the federal community.

“As I’ve begun to think about this transition, I’m buoyed by all that we’ve accomplished over the past four years!” Baitman said in his email. “Balancing both operational and policy roles, OCIO has become increasingly customer-focused while building stronger ties to the operating and staff divisions we partner with. In short, we’ve become a professional IT organization that meets the business and mission needs across HHS.”

Baitman highlighted accomplishments in the past year with his 10 priorities.

One major goal was moving the department to cloud email and storage to enable employees to collaborate on a single platform. Baitman said HHS moved about 80 percent of all employees with the final 20 percent coming in 2016.

He said HHS is on track to consolidate help desks to support agency customers with a completion date in 2016.

Baitman said his office tested 10 initiatives in a “sandbox” to pilot fast contracting and deployment of cloud services. He said the goal is to expand the sandbox concept to ease the path from testing to production.

“Collectively, we got the job done!” Baitman said. “Thank you for your commitment to this process, and to the outcomes we delivered. Each of you is transforming IT at HHS, and together we are building a stronger foundation to support the HHS missions.” 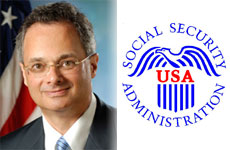 Baitman wants to bring SSA into the e-business world