Despite procurement concerns, vendors made out well in 2016

Federal procurement spending is up. The number of mergers and acquisitions are skyrocketing. And overall, despite worries about the transition to a new administration, the continued inability of Congress to pass appropriations bills on time and what, many said, was an unfriendly environment for federal contractors, fiscal 2016 was a pretty darn good year for vendors.

Federal procurement spending is up. The number of mergers and acquisitions are skyrocketing. And overall, despite worries about the transition to a new administration, the continued inability of Congress to pass appropriations bills on time and what, many said, was an unfriendly environment for federal contractors, fiscal 2016 was a pretty darn good year for vendors.

Bloomberg Government released its sixth annual Top 200 contractors Aug. 23 along with data on trends across the federal sector.

“Overall we saw a lot of positive areas for contractors in terms of growth in these markets,” said Daniel Snyder, deputy director of BGov’s Government Contracts Research, during a webinar on Aug. 29. “About one-third of overall categories were in the plus this year, and then in terms of companies, about 121 companies improved their rankings, they are followed by 64 who did a little worse than the year before and 14 remained just about the same and maintained their position.”

There are several trends that jumped out of Bloomberg Government’s research, but probably the most important one is around mergers and acquisitions.

Snyder said their data shows 209 transactions in the federal space in 2016 with a combined purchase price of almost $584 billion. He said the M&A activity for 2017 is just as brisk.

“Certainly that is an area where people will seek to grow inorganically,” he said. “A lot of those are not surprisingly are going to be derived from the IT market category. We are seeing a tremendous amount of consolidation, mostly driven by some of the outdated legacy systems that are being concentrated and as people look to augment their services to perform more effectively and compete for these emerging technologies, such as cloud, digital services and cybersecurity, it’s having a tremendous shakeup in the market.”

The M&A trends BGov found are supported in other research too.

Grant Thornton found in its 2016 federal contractor survey from earlier this year that about 60 percent of the companies who responded, especially those in the mid-range $50 million to $100 million in revenue, expected to be involved in a merger or acquisition in the next five years.

“What wasn’t surprising that half of those companies involved in M&A were using 5-to-7 times the cash flow to determine the price,” said Rich LaFleur,, a partner Grant Thornton and co-leader of the government contracts industry practice back in June. “What was little shocking to us was we saw 25 percent of the M&A transactions were 9 times the cash flow. So the question is why are the deals priced so high? It could be the competition for the company or even the high degree of value on diversification that companies place. We’ve seen transactions around cyber and data analytics come in at 15 times the cash flow.”

In fiscal 2017, the McLean Group says it has tracked 50 mergers and acquisitions in the defense and government services sectors. The company says there is more activity in the second quarter of 2017 than at the same time in 2016.

BGov says the 2016 M&A environment focused on what experts call “tuck-in deals, where a business adds complementary pieces to the larger company.”

BGov says in terms of dollar value, portfolio-shaping deals, which add or remove offerings that are complementary to – but outside of – the acting company’s current or planned area of focus, had the largest market impact.

“Other companies looked to enter markets or make federal contracting a more significant part of their revenue stream. For example, KBR Inc. (No. 46), an engineering, construction, and services company expanded its information technology market presence by acquiring Honeywell Technology Solutions,” Bloomberg stated in its report.

The continued activity among vendors is concerning. Not only could it reduce competition, but increase the divide between large and small businesses.

Agencies continue to spend the most money on professional services or knowledge-based services as compared to other services sectors.

“Professional services or knowledge based services…is going to be a highly diversified and competitive market, which a lot of different companies are going to be consistently competing for,” he said. “It’s not only an attractive market in the types of goods and services the government continues to buy, but it’s also a market segment that saw an increase, which is going to attract new entrants into this landscape as well.”

Boeing ($2.2 billion), Booz Allen Hamilton ($2 billion) and Northrop Grumman ($1.9 billion) are the top three vendors in terms of revenue in this category.

“Several of the companies…are pure play professional services type of companies and they are going to rely on professional services for almost their entire share of the federal market dollars that they generate,” Snyder said. “Others, including SAIC, CACI, Engility, Jacobs and others, generate about half of their revenue from this massive $72 billion segment of the market.”

BGov also found the Army spent the most on knowledge-based services at $10.6 billion with the Air Force coming in a close second with $10.4 billion and the Department of Navy third with $7.8 billion. The most popular contracts were the General Services Administration’s professional services schedule ($5.4 billion) and the Navy’s Seaport-e ($3.4 billion).

Federal agency spending on technology services is the fourth largest category at $40.1 billion—behind facilities ($68.6 billion) and research and development ($40.3 billion). But if you combine technology services with technology equipment, agencies spent almost $70 billion in 2016.

BGov says under technology services CSRA and Northrop brought in the most revenue ($1.8 billion) and DXC—formerly HP Enterprise Services—was third with $1.7 billion.

The departments of Defense, Health and Human Services, Homeland Security and Veterans Affairs are the top four agencies spending on IT services.

“One of the things that struck me as we talk about the importance of the Department of Defense is how contractors are going to continue to position themselves with an agency like the Defense Information Systems,” Snyder said. “A lot of the competitions that seem to be coming out are increasing the importance and role of DISA so a lot of work in terms of emerging technologies like cloud computing are being spearheaded by DISA. In this particular segment of the market, it is going to be as diverse and competitive as something like knowledge based services. So having those positions in place and having that relevant past performance is going to be a huge factor for companies who will continue to appear on this top 10 list.” 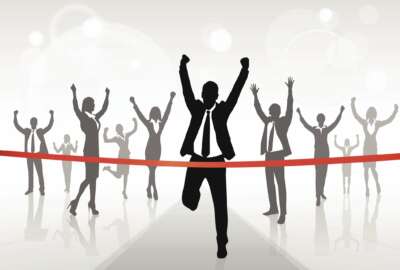 Incumbents ruling less of the day in federal contracting