The Veterans Affairs Department is one of a few civilian agencies that received a multi-billion dollar budget boost from President Donald Trump. The president proposed $186.5 billion for the department in fiscal 2018, an increase of $6.4 billion or 3.6 percent over 2017.

Most of the additional funding will go toward health care, with $3.5 billion in mandatory funds for the VA Choice Program, as well as a 7.1 percent spending boost to the Veteran Health Administration to continue health care access...

The Veterans Affairs Department is one of a few civilian agencies that received a multi-billion dollar budget boost from President Donald Trump. The president proposed $186.5 billion for the department in fiscal 2018, an increase of $6.4 billion or 3.6 percent over 2017.

Most of the additional funding will go toward health care, with $3.5 billion in mandatory funds for the VA Choice Program, as well as a 7.1 percent spending boost to the Veteran Health Administration to continue health care access improvements.

Yet some lawmakers and veterans service organizations, such as the Veterans of Foreign Wars, said they’re concerned the president’s budget indicates a desire to make the VA Choice Program a mandatory one, even though the department indicated its desire to overhaul and redesign the way veterans receive health care from the private sector.

VA Secretary David Shulkin said the Veterans Choice Program redesign is coming. He plans to present his plan to Congress in about 10 days.

“We are grateful that this budget includes money for the continuation of the Choice fund,” Shulkin told the House Veterans Affairs Committee May 24. “The last budget did not include that. This is an indication that there will be continued support to allow our veterans to get the care they need.”

Some lawmakers said they’re concerned with these numbers, because it’s unclear what direction the administration wants to take with the Choice Program. And debates over privatization heated up last year, particularly after some members of the congressionally appointed VA Commission on Care recommended such moves.

“[The budget] appears to delay the foundation of Choice 2.0 and increased non-VA care without a plan yet that’s been given to us,” said Rep. Tim Walz (D-Minn.), the committee’s ranking member.

Lawmakers were concerned by budget cuts to other areas of the department, such as a 5 percent reduction to medical research funding.

Yet the department downplayed those concerns.

“This funds and continues what we’ve been doing in the Choice program,” Shulkin said. “The increase in the budget that the president has proposed is actually increasing discretionary funds in the VA. This allows us to continue to build and strengthen the VA system.”

Shulkin has already hinted what he wants the new Choice program to look like. Generally, the goal is to consolidate the several different ways veterans can access private sector care into one, more manageable system.

“We want to change [the Choice Program] from being an administrative system that is based upon being 40 miles away from a primary care provider and … based on 30 days or more wait time, to being a clinical system that actually meets the clinical needs of the veterans we serve,” Shulkin said. “We believe we have a way of doing this, and we believe that we’ll do it within the budget that the president has proposed.”

Most lawmakers were pleased with the proposed budget boost to the department but questioned whether VA has the ability to turn extra dollars into better results.

“I can assure you I will continue to advocate for resources VA needs to meet our nation’s obligations to veterans,” said House VA Committee Chairman Phil Roe (R-Tenn.). “However, increasing VA’s bottom line year after year often results in more bureaucracy but seldom results in better services. Throwing money at a problem rarely makes it go away.”

Many lawmakers said they were concerned by the drop in IT funding in the president’s budget proposal.

The budget includes a $215 million cut to IT spending in the department in 2018.

The IT budget does not account for VA’s future modernization project, particularly its plans to either outsource the work to continue the department’s current Veterans Information Systems and Technology Architecture (VistA) or buy a completely new off-the-shelf IT solution. Shulkin said he’s on track to make a decision about VA’s future direction by July 1.

“What you’re seeing in this budget is a recognition that we do not want to continue to ask for more money and invest more money in fixing broken systems,” Shulkin said. “We are not done with IT. We’re going to need to come back to you after I announce a direction by July 1 to be able to talk to you about what really needs to be done in modernizing our IT systems.”

Yet members of the committee were apprehensive of the secretary’s approach toward the IT budget, especially given the department’s track record with major VistA, electronic health record and appointment scheduling projects.

And others are concerned by the administration’s priorities at VA — and the message the president’s budget sends about the department’s priorities.

“You did not request more in IT spending because you don’t yet have a plan,” said Rep. Beto O’Rourke (D-Texas). “But it seems like we’re requesting more for Choice spending without fully understanding how we’re going to improve the Choice system.”

Shulkin has often spoken of 49,000 vacancies, most within health care professions, at the department. The president’s budget gives VA the funding to make a dent into those vacant positions.

“We have a lot of turnover going on,” Ed Murray, acting assistant secretary management and chief financial officer, said May 23. “We have recurring actions that have been open for a long period of time, so the 7,000 number represents our best estimate of what we think we’re going to bring on board in terms of new total FTE. If we are more successful than that, we have the ability to move funds from other places to help cover that additional hiring.”

For example, the budget gives VA the funding to hire 164 more full time employees at the Board of Veteran Appeals to help the department whittle down the backlog of 470,000 pending appeals, Murray said. 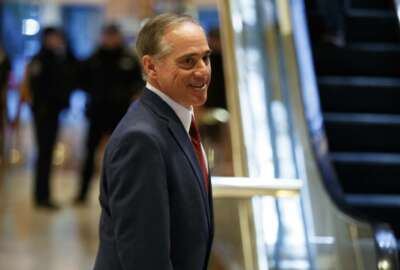