“Disappointed but not discouraged” is how some leaders at the Homeland Security Department described the latest results of the 2015 Federal Employee Viewpoint Survey.

The department’s employee engagement score continued its steady decline for the sixth consecutive year. It dropped 1 percentage point from 2014, and at 53 percent, DHS employees said they are the least engaged of any other large agency.

But the department wants to turn morale around, and it’s creating a new chief learning and engagement officer position to lead the charge.

DHS Undersecretary for Management Russell Deyo said this leader will be the senior accountable official in charge of a new, departmentwide engagement program. The position — which Deyo said he’s already received some applications for — is responsible for cultivating and training new leaders and improving communication among DHS headquarters and each of the department’s 22 component agencies.

The chief learning and engagement officer will have his or her own team of people and a secure line of funding, Deyo said.

The ultimate goal, he said, is to make DHS a more attractive place to work for talented people.

“We are not focused on raising the score 1 percent or 2 percent,” Deyo said, during an open Homeland Security Advisory Council meeting Sept. 29. “We’re focused on sustainable improvements that continue to improve on the excellent work that’s been done in this space by the Secretary and the Deputy Secretary, to make this the place where people want to come and work. Yes, we’re going to be focusing on the fundamentals that underline the survey, but we are focused on sustainable improvements.”

Each DHS component is also responsible for creating its own customized engagement plan. Deyo said it will be the job of DHS headquarters to create metrics and milestones and track progress. Ultimately, he said, “one size doesn’t fit all” for every component agency.

Deyo said he will lead meetings once a month for the DHS Employee Engagement Steering Committee, which also includes one representative from each of the department’s 22 component agencies.

Change will start at the component level, but DHS Deputy Secretary Alejandro Mayorkas said the department needs to do a better job creating a sense of mission and culture throughout the agency as a whole.

“When I was a young lawyer, I was given a particular task. I found the task very challenging, but I didn’t necessarily understand how it fit into the case as a whole,” he told Federal News Radio. “Understanding the work that I do and how it fits into the broader mission of the department is critical to the sense of fulfillment and purpose that an employee will have.”

Bright spots in the disappointment

Mayorkas said he’s not surprised by the survey results and expected them to be worse, in part, because of a variety of challenges the department faced last year.

“Material change in an organization, especially a large organization, takes time,” Mayorkas said. “What the survey seems to drive is an effort to achieve quick fixes for the benefit of next year’s survey, as opposed to the real tilling of the soil and watering that leads to sustainable and impactful change.”

DHS was the last department to receive its funding, after threats of an agencywide shutdown over President Barack Obama’s immigration policies in February.

“That sends a very damaging message to our workforce with respect to how they are valued and the critical nature of their work,” Mayorkas told Federal News Radio.

“We made a change early on that impacted employees’ pay adversely,” Mayorkas said, during the meeting. “We eliminated administratively uncontrollable overtime because it did not comply with the law. They were long held practices, but they had to come to an end. We had an overuse of home-to-work, the use of vehicles. The elimination of pay and perks begins a vast precipitous descent in morale.”

But DHS leadership said it sees a few bright spots in an otherwise disappointing FEVS cycle.

Deyo said 85 percent of the agency’s employees recognize the work they do is important and are willing to put in extra work to get a job done.

Scores at Immigration and Customs Enforcement held steady on nearly all indices in 2015. The Transportation and Security Administration is also stabilizing, Deyo said.

Employees at ICE, TSA and Customs and Border Protection make up 70 percent of the entire DHS workforce. With consistent scores at two out of the three of the department’s major components, both Deyo and Mayorkas think DHS can begin to move forward and might see better results next year.

But Mayorkas said there isn’t one quick fix.

Cause, effect of DHS morale problems tied to leadership vacancies 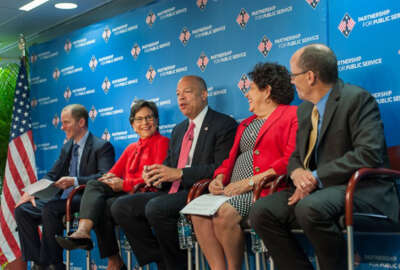 Agency leaders ‘on a mission’ to pump up employee morale