CHICAGO — When comes to telework, many agencies say there’s a lot they haven’t yet figured out.

“For us, it’s been building the plane while we’re flying it,” Charles Hardy, chief workplace officer for the General Services Administration, said during an Aug. 18 panel discussion at the National Labor Management Conference in Chicago.

That notion is becoming more clear to the Office of Personnel Management, which said it will soon look more closely at how...

CHICAGO — When comes to telework, many agencies say there’s a lot they haven’t yet figured out.

“For us, it’s been building the plane while we’re flying it,” Charles Hardy, chief workplace officer for the General Services Administration, said during an Aug. 18 panel discussion at the National Labor Management Conference in Chicago.

That notion is becoming more clear to the Office of Personnel Management, which said it will soon look more closely at how agencies are using and reporting on their telework programs.

OPM will collect information on federal employees’ usage and eligibility on a biweekly and monthly basis through the Enterprise Human Resources Integration (EHRI) system status data feed and payroll data feed. The agency said it’s on track to meet annual congressional requirements to report agency data from EHRI, as mandated under the Telework Act of 2010.

Agency human resources staff and telework managing officers should review the reports, check the data for accuracy and determine whether there could be any issues that may impact the information or the reports, Reinhold said.

Next, OPM will gather agency HR and telework leaders, as well as payroll providers, to discuss how it can help organizations report telework more accurately and what next steps they should take.

Will the upcoming presidential transition impact your decision to retire? Take our online survey.

The outcomes of these meetings will determine whether OPM will release more guidance on telework or work specifically with individual agencies, Reinhold said.

The Government Accountability Office is perhaps more experienced in using telework than other agencies. GAO’s own telework policy mandates that eligible employees may telework for up to half of their schedules, said Ron La Due Lake, president of the GAO Employees Organization.

GAO measures its employees’ performance and accountability under the telework program, he added.

“It’s grown into an ongoing, very robust measurement process that’s primarily survey based, but not exclusively,” La Due Lake said. “For example, in the first iteration of this, they just surveyed staff who were on the mission products … on quality, time.”

Now, GAO has turned its focus on culture, and how it’s changed when more employees work outside of the office and how they interact with each other.

“On the rare occasions I have experienced issues with telework, it is not a telework issue,” said Jacqueline Nowicki, director of the GAO education, workforce and income security team, who works as many as four days a week from home. “It’s a performance issue, and we need to deal with that.”

At the General Services Administration, telework played a major role in the agency’s $24.6 million in annual savings on rent and 40 percent cut to office space, according to GAO.

“People are learning different ways to do things,” Grady said. “When it comes to some of the work practices, security, all of those things, it’s just highlighting some of the things we should already be doing anyway — proper care of materials, proper conversations, proper management, proper employee behavior. Telework tends to bring those to the surface. Now, we’re working with what are those protocols and how to start to put into place practices [on] things we should have already been doing.”

Allison Beck, director of the Federal Mediation and Conciliation Service, said telework is a topic that FMCS often discusses with agencies and labor leaders.

“We find many agencies struggling with that, the notion that unless you see somebody, you can’t possibly supervise them,” she said in an interview with Federal News Radio. “I think we’re doing a good job — and a better job — in helping to train parties to work through these issues together.”

Telework will become a bigger part of the conversation at FMCS as well, as the agency plans its upcoming office move in November.

“We are going to have to make telework a fallback as we go through that process and also make it more available on a regular basis,” she added.

GSA said it cut its office space by 40 percent while it renovated its headquaters, saving $24.6 million annually in rent, partly thanks to telework. But few agencies are reporting the benefits and savings that they’re seeing from telework, GAO said in a recent study.

Telework is saving some agencies millions, but too few are measuring the decreases 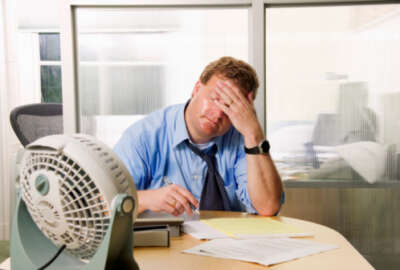