Classical music concerts for human trafficking victims. A bartending and homebrew class taught near one of the hottest places on earth. School supplies donations for impoverished students.

If you thought the foreign service was indulgent galas and flowing champagne, meet this year’s seven winners of the Secretary of State Award for Outstanding Volunteerism Abroad (SOSA).

“I think that many people don’t know even what the foreign service is, and if they do know they think...

Classical music concerts for human trafficking victims. A bartending and homebrew class taught near one of the hottest places on earth. School supplies donations for impoverished students.

If you thought the foreign service was indulgent galas and flowing champagne, meet this year’s seven winners of the Secretary of State Award for Outstanding Volunteerism Abroad (SOSA).

“I think that many people don’t know even what the foreign service is, and if they do know they think we are sitting out somewhere in long dresses and long gloves and waiting for the next load of caviar and just having parties and not doing much,” said Mette Beecroft, state liaison for the Associates of the American Foreign Service Worldwide, which presented the awards. “I think that all of these wonderful things that these people have been doing belies that reputation. In a way, I think it shows Americans at their generous best.”

Speaking at a small audience gathered Nov. 10 at the State Department headquarters in Washington, D.C., Heather Higginbottom, deputy secretary of state for management and resources, said the winners of this year’s awards “quite simply … have made the world a better place.”

“They have taken the initiative, raised their hands, offered their time and talent for the benefit of others. They have had the vision and energy to create opportunity where none previously existed and in so doing, they have become ambassadors of our country, our culture and our values,” Higginbottom said. “Their work has directly impacted individuals and communities around the world.”

This year’s SOSA award winners are:

AAFSW President Joanna Athanasopoulos Owen, Ph.D., said the winners were narrowed down from a pool of 19 worthy candidates.

“It was a very difficult process to go through,” Athanasopoulos Owen said. “It was amazing to see how many talented people are trailing spouses. Most of this volunteer work is from significant others. It takes talent, effort, grit and commitment to pull together ideas and also finance it somehow, and go and find somewhere that it will really make a difference.”

For other Foreign Service members looking to make a difference in their community, Sofia Blake said the best lesson she’s learned and can offer is to not wait to be ready, just start something.

“You don’t always have to entirely know what you want to do; just do it,” Blake said. “For the longest time I’ve been the searcher of a greater purpose or something I think all spouses go through: similar desires to feel useful, to contribute, for us to have meaningful experiences in a place. Instead of searching for it, I found it more useful to take any opportunity and start building something from there.”

“Just get into it,” Craig Gerard said. “There’s always going to be a learning curve. Don’t wait for the perfect opportunity or perfect circumstances. Start whatever volunteer opportunity you’re looking to do. Learn as you go, once you get rolling, you’ll find where your niche is and get into a groove.”

Ronit Gerard credited her husband for his support in following her around the world. She said the two like being involved in everything that they can, and often find themselves heading outdoors.

“I really believe that getting involved in the community is incredibly important,” Ronit Gerard said. “It just changes the experience of being overseas. We are so privileged with the work that we do and the things that we have, that any opportunity to give back while we can in these different countries that we live in, is a pretty wonderful opportunity. ”

Three other awards were also given out during the Nov. 10 ceremony. They were:

Evans has lived abroad for 11 years, and each move is difficult, she told Federal News Radio.

At first, she was very excited about joining the service, but “I quickly realized that I have a very difficult time with transitions,” Evans said. “One of the things that made it so difficult for me was missing the sense of connection and community in the first few months that you’re at post.”

While social media does make it easier to create a community, it can take time before you feel a part of it.

Like some of her fellow award winners, her advice for other men and women around the world in the foreign service is don’t be intimidated by hurdles.

“I would council jumping in and doing things,” Evans said. “Sometimes there’s push back, and people say, ‘Oh you can’t do that, or this doesn’t make sense,’ but I think fighting for it, pushing for it especially if you think it’s right, and starting early because especially in the beginning that’s where you need to find your space, It’s a good time to carve that out.” 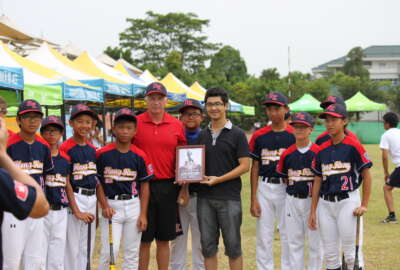