A majority of federal employees who took a Federal News Radio survey said they believe Congress will make good on President Donald Trump’s proposed civilian agency cuts for fiscal 2018. And while the looming threat of cuts has put a damper on workforce morale, most respondents plan to stay on-the-job at their federal outposts.

Federal News Radio conducted the survey after Trump unveiled his fiscal 2018 budget request on March 16, which would bring double-digit...

A majority of federal employees who took a Federal News Radio survey said they believe Congress will make good on President Donald Trump’s proposed civilian agency cuts for fiscal 2018. And while the looming threat of cuts has put a damper on workforce morale, most respondents plan to stay on-the-job at their federal outposts.

Federal News Radio conducted the survey after Trump unveiled his fiscal 2018 budget request on March 16, which would bring double-digit cuts to a majority of non-defense agencies. The Environmental Protection Agency and the departments of State, Agriculture and Labor would face the largest cuts as a percentage of their total budgets, if Congress approved a spending plan similar to the president’s budget request.

Of the 258 respondents that took our survey, more than 77 percent reported that news of Trump’s proposed budget cuts had a significant or moderate impact on their office’s morale.

“Nothing brings positive change like a hard budget cut,” one respondent said in response to the online survey.

Paul Hanges, a professor of industrial/organizational psychology at the University of Maryland, told Federal News Radio that studies show “fairly consistent kinds of reactions” when government or private-sector employees see budget cuts on the horizon.

“They become more narrow-minded in their approach to their work. They’re less creative, they tend not to take risks … we see that productivity starts to drop early on, while the threats of these cuts are coming down the pike, even before employees have actually been cut,” Hanges said.

While presidential budget proposals demonstrate the priorities of a new administration, they’re usually dead-on-arrival, and the funding levels approved by Congress often reflect a series of compromises not found in the White House’s plan. But 43 percent of federal workers who took our survey said it’s “very likely” Congress will approve a budget that delivers cuts to their agency, while 32 percent said it’s “somewhat likely” that cuts would happen to their offices.

Anthony Standford, a former Department of Housing and Urban Development employee with 40 years of government service, and an author who’s written books on the federal workforce, said he believes Congress will enact some cuts to civilian agencies.

“There will be compromise, but there will be cuts, and that’s not unusual. And the severity in how deep those cuts go will really be the measure of how morale will be affected,” Stanford said.

With the current continuing resolution set to expire on April 28, most federal employees said they don’t anticipate a government shutdown like in years past. More than 27 percent said they expect a government shutdown, but more than 67 percent predicted that Congress will pass another CR for the short-term, if not for the rest of fiscal 2017.

But it’s that uncertainty, Stanford said, that’s eroding federal employee morale, as some prepare for a worst-case scenario that won’t happen.

“People are anticipating things that probably won’t happen, but because news is everywhere …. and it’s mostly derogatory. These workers are taking this to work with them, they’re taking it back home with them, and they’re just sort of stewing in it,” he said.

When asked how they plan to react to budget cuts, federal employees gave a variety of responses. Most respondents, 29 percent of those surveyed, said they’re concerned by potential budget cuts, but not looking to leave their agencies anytime soon, while 21 percent said they would wait and see what kind of budget Congress approves before making any decisions about their federal career. Another 11 percent said they’re not worried at all by the threat of cuts.

However, more than 14 percent said they would accept a buyout if it was offered by their agency.

“I am very concerned. I don’t want to leave my job, but I may be forced out,” one anonymous respondent wrote in the survey.

Federal civilian agencies have the authority to offer as much as $25,000 to incentivize early retirement for workers. The Defense Department can offer its civilian workforce up to $40,000, thanks to a provision in the latest National Defense Authorization Act. Another 13 percent said they plan to leave government service or retire as soon as possible.

“I am disgusted by my agency and have begun to seek private sector jobs (my year-long federal search has been affected by CR and hiring freeze),” said another anonymous survey respondent.

Stanford, who remains in touch with federal employees and federal union representatives, said he’s heard from workers looking to take a buyout if it’s offered, but working at agencies like HUD, which face major cuts, some employees worry about what will happen to areas of the public that depend on their services.

“The fear is real, this is not pretend,” Stanford said. “They’re not only worried about their jobs, they’re worried about the people that they serve — the poor and the working-class who depend on this. And the budget cuts that are coming down across several agencies really sound like they’re going to have an impact on programs that people use.”

If Congress does put large-scale budget cuts into place, it could renew fears of a federal retirement wave, in which senior career employees leave government en masse. For example, more than 30 percent of HUD’s current full-time workforce is eligible for retirement. The Homeland Security Department, one of the few agencies the Trump administration wants to increase funding for, has only 15 percent of its workforce eligible for retirement.

“If you don’t have the workforce behind them to fill in those ranks, and they’re not hiring, there’s a potential for real problems,” Mallory Barg Bulman, the vice president for research at the Partnership for Public Service, told Federal News Radio.

Members of the Senior Executive Service, not surprisingly, have an even higher rate of retirement eligibility, but federal employees’ sense of mission plays a role in keeping them from leaving public service in droves, especially at the senior level.

“These are people who are really committed to the vision or goal or value of what they’re doing. They believe that …. they have the right kinds of skills and abilities to accomplish this mission,” Hanges said.

A recent study on federal employee retention identified several reasons why members of the career civil service decide to stay put during an incoming administration they oppose. Where some see an opportunity to work with the new administration, others believe they can “wait them out.”

“You start seeing some negative behavior occurring, where those people who are remaining believe that they are necessary in order to keep the mission of the organization going, and they start seeing the administration as the enemy,” Hanges said. 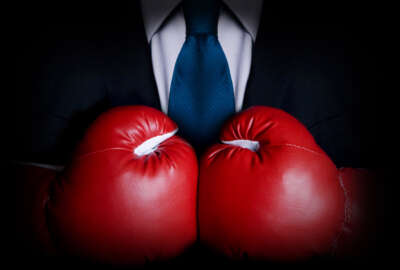