A federal appeals court in Atlanta acknowledges the Biden administration has felt the impact of contracting delays from the COVID-19 pandemic.

But a three-judge panel from the U.S. Court of Appeals for the 11th Circuit says it remains unclear whether the Biden administration has the authority to impose a COVID-19 vaccine mandate on federal contractor employees.

The administration told the court last Friday that federal contracting law gives the president broad authority to set the...

A federal appeals court in Atlanta acknowledges the Biden administration has felt the impact of contracting delays from the COVID-19 pandemic.

But a three-judge panel from the U.S. Court of Appeals for the 11th Circuit says it remains unclear whether the Biden administration has the authority to impose a COVID-19 vaccine mandate on federal contractor employees.

The administration told the court last Friday that federal contracting law gives the president broad authority to set the terms of the federal government’s contracts, including making sure contractors have enough healthy employees to complete their contracts with agencies on time.

The judges,  however, repeatedly said during oral arguments that the federal government has a high bar to clear, in order for the court to overturn a lower court’s injunction barring the administration from enforcing the mandate.

“It’s not that I think your side is wrong. It’s that it’s not plain to me that your side is right, and I think that is enough to say there’s been no abuse of discretion,” Pryor said.

However, Pryor added that the case has a fair chance of being settled by the Supreme Court.

“You may win this case. The Supreme Court may go with the government on down the road. I wouldn’t be surprised, I wouldn’t say ‘I’m shocked.’ But I won’t be surprised if, at the end of the day, the other side wins this case either,” Pryor said.

A federal judge in Georgia last December blocked the Biden administration from enforcing its vaccine mandate for federal contractors across the country, siding with several state attorneys general and contractors who said the mandate created an unfair economic burden.

The Sixth U.S. Circuit Court of Appeals in January upheld a lower court’s ruling that found the administration didn’t have the authority to order a vaccine mandate for federal contractors.

Revesz said agencies put workforce qualifications, such as requiring employees to have security clearances, in contracts all the time.

“When federal contractors are getting sick, and when they’re infecting their coworkers with a virus, things move more slowly and the government ultimately bears that cost. There’s the cost directly in sick leave costs for certain contracts. But more often, the government will bear the cost indirectly through delays and lower quality work, and it was entirely within the president’s authority to say that is the kind of delay that I want to address under the Procurement Act,” Revesz said.

“A proprietor naturally wants to have his work done efficiently. And it’s entirely reasonable — in fact, it makes common sense and is consistent with common experience — that if you’re not vaccinated, there’s a much greater chance that you’re going to get sick and delay the work,” Anderson said.

Stephen Petrany, the solicitor general for the Georgia Attorney General’s office, however, argued that the president doesn’t have the authority to unilaterally impose a vaccine mandate on roughly a fifth of the country’s workforce.

Petrany said the Procurement Act gives the president the authority to act as a “benign, essentially residual authority” to help the General Services Administration create a framework for the government’s contracting operations.

“It does not give him a wide-ranging authority to impose social and health policy by commandeering the internal operations of federal contractors,” Petrany said.

Some of the biggest recipients of federal contracting dollars, he argued, would essentially have no choice in whether to comply with a vaccine mandate.

Petrany said the Georgia Institute of Technology, for example, receives about a third of its revenue — about $600 million a year in revenue — from federal contracts.

“They can’t just drop their federal contracts and not do this thing. They have to try to comply with that,” Petrany said.

Petrany said the plaintiffs don’t dispute that vaccines aren’t good or effective, but said there was a significant difference between vaccines and vaccine mandates.

“The mere fact that if people got vaccines that might help a company be more efficient, is a far cry from well what happens when you have to start firing people because they refuse to get the vaccine,” Petrany said.

Judge Britt Grant said the federal government since March 2020 has had its contracts delayed, and has incurred millions of dollars in sick leave payments.

“It has had very specific consequences from a lack of vaccination, first before the vaccine was offered, and then second, from people choosing not to take it once it was available,” Grant said.

Pryor said the court should also consider whether the current injunction makes it harder for contractors who do want a vaccine mandate for their employees. 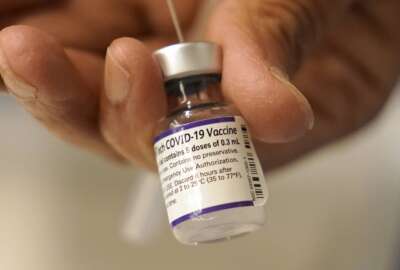 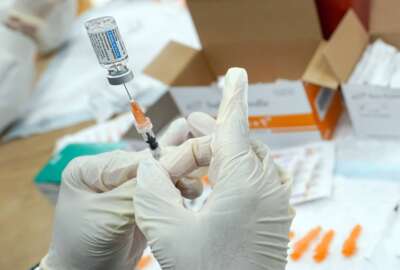 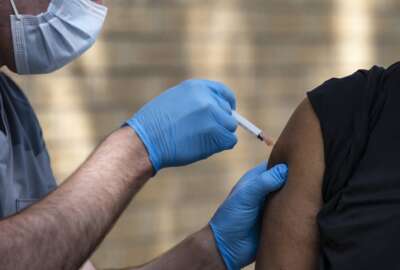