After scrapping plans to bring the Federal Bureau of Investigation under one roof, the Trump administration says it intends to demolish the old FBI headquarters and build a new facility in its place, or renovate the existing J. Edgar Hoover building.

Instead of consolidating the nation’s top law enforcement agency under one roof in suburban Maryland or Virginia, the General Services Administration announced its plan Monday to tear down or renovate the crumbling J. Edgar...

After scrapping plans to bring the Federal Bureau of Investigation under one roof, the Trump administration says it intends to demolish the old FBI headquarters and build a new facility in its place, or renovate the existing J. Edgar Hoover building.

Instead of consolidating the nation’s top law enforcement agency under one roof in suburban Maryland or Virginia, the General Services Administration announced its plan Monday to tear down or renovate the crumbling J. Edgar Hoover building in downtown Washington, D.C.

Between the D.C. headquarters and its training facilities in Quantico, Virginia, about 8,300 of the FBI’s employees would remain in the capital metro region.

However, the administration’s new proposal would also send more than 2,000 FBI staff to new facilities in Idaho, West Virginia and Alabama, according to a GSA report to the Senate Environment and Public Works Committee.

In a copy of the report, obtained by Federal News Radio, GSA and the FBI told senators Monday that the cash-and-land deal proposed under the old headquarters consolidation plan was too risky to implement.

“It was jointly determined by GSA and FBI that making a contract award without full funding put the Government at risk of cost escalations and the potential reduction in value of the [J. Edgar Hoover] site,” a slide in the presentation to the committee stated.

Before the plan was abandoned by the Trump administration in July 2017, GSA originally planned to award appropriated funds and the FBI’s downtown D.C. real estate to the contractor selected to build a new suburban headquarters in Springfield, Virginia, Landover, Maryland, or Greenbelt, Maryland.

But GSA last year cited an $822 million funding gap through this arrangement.

In its new proposal, GSA estimates that a new FBI headquarters would cost $3.3 billion — $1.9 billion of which would be construction costs.

Citing a two-year budget deal proposed by congressional leaders that would raise spending caps, the Trump administration seeks more than $2.1 billion in appropriations to fully fund the new FBI headquarters and the demolition of the old one.

“[The J. Edgar Hoover building’s] infrastructure is on a path to catastrophic failure with key building systems past their expected service lives,” the GSA presentation states, adding that parts of the concrete structure — both interior and exterior — have reached a failure point.

While GSA has presented a number of contracting scenarios for the federal government to proceed with, the new FBI headquarters would only reach full occupancy by 2025.

Under this new plan, more than 2,000 FBI headquarters employees would move to one of three locations — Pocatello, Idaho for data center workers and administrative staff; Clarksburg, West Virginia for criminal justice services and biometrics staff; or Huntsville, Alabama, to work out of the Terrorist Explosive Device Analytical Center (TEDAC) and Hazardous Devices School (HDS).

On Capitol Hill, lawmakers took the news as a major departure from the decade-long process of selecting a new FBI headquarters site.

Sen. Ben Cardin (D-Md.), the ranking member of the committee’s transportation and infrastructure subcommittee, said in a statement that he was “extremely disappointed” in GSA’s new direction for the project.

“The GSA proposal makes little sense, especially given the clear-cut requirements both the FBI and GSA have laid out for more than a decade for a fully consolidated, secure FBI campus. To put forward a proposal that has a higher cost for less consolidation and is inconsistent with congressional authorization is bizarre — perhaps more bizarre than GSA’s original decision to cancel the previous procurement. It is incomprehensible how the agency came to this decision.”

Rep. Gerry Connolly (D-Va.), the ranking member of the House Oversight and Government Reform Committee’s subcommittee on government operations, said he expects lawmakers to push back on the proposal.

“What an immense waste of time and resources. The only thing missing from this announcement was an apology: an apology to Virginia and Maryland for the time they spent developing site proposals, an apology to the FBI employees who will continue to work in the crumbling Hoover Building, and an apology to taxpayers for a procurement so bungled that we are at square one more than 5 years after GSA started this process,” Conolly said.

Conolly added in a statement: “The most insulting aspect of this latest development is that the new plan released by the Trump Administration doesn’t even include a consolidated headquarters that can house all 11,000 of the FBI’s area employees.”

In a statement, Rep. Anthony Brown (D-Md.) said he disagrees with the Trump administration’s “dispersed workforce” plan, and said the project “undermines collaboration and intelligence sharing.”

“The Trump White House is putting America’s national security at risk, and is continuing its thinly-veiled assault on the FBI. This decision falls short of meeting the needs of the nation’s premier intelligence and law enforcement organization. The men and women of the FBI deserve better,” Brown said.

A GSA spokeswoman said Monday that the new proposal seeks to address the problems of the deteriorating Hoover building. During the demolition and construction, FBI personnel, she said, would be temporarily relocated.

“The work of the FBI requires a modern and secure headquarters with technology and equipment to support the men and women of the FBI who are dedicated to keeping our country safe. The report issued by GSA and FBI today provides for the new headquarters the FBI needs to accomplish its important work,” the spokeswoman said. 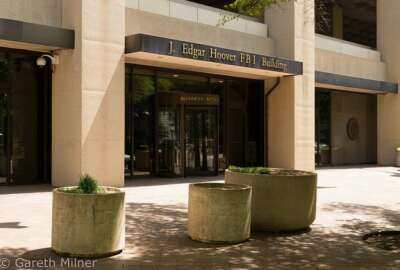