No fewer than eight federal programs in four departments have to do with chemical safety and security. They’re supposed to coordinate with one another and with the facilities they regulate. But as one might imagine, there’s duplication, overlap and fragmentation when it comes to dealing with dangerous chemical depots. The director of the Homeland Security and Justice...

No fewer than eight federal programs in four departments have to do with chemical safety and security. They’re supposed to coordinate with one another and with the facilities they regulate. But as one might imagine, there’s duplication, overlap and fragmentation when it comes to dealing with dangerous chemical depots. The director of the Homeland Security and Justice team at the Government Accountability Office, Nathan Anderson, had more insight on Federal Drive with Tom Temin.

Tom Temin: Mr. Anderson, good to have you back.

Tom Temin: And these duplicative programs do come under the purview, or not the purview of, the eyeball of GAO. What’s new about this one? these programs date back some years and Homeland Security’s got its piece and other agencies have, give us a sense of the tangle here.

Nathan Anderson: Well, there absolutely is a tangle and these programs have evolved over time. There’s a number of different departments involved, as you pointed out, in addition to the Department of Homeland Security, there’s eight other programs that fall under a handful of different departments. Some are 30 years old, and some are newer. The bottom line though, is they all have their fingers in facilities that ultimately can have dangerous quantities of chemicals.

Tom Temin: And the other agencies besides Homeland are EPA, I’m guessing is one of them.

Nathan Anderson: Yes, EPA has two programs that are involved. You’ve got the Department of Transportation with pipeline safety, you have TSA, which also has a regulatory role in pipelines as well. And then obviously, the big one department of Homeland Security.

Tom Temin: Bureau of Alcohol, Tobacco, Firearms and Explosives. They’re in there too.

Nathan Anderson: Absolutely, Department of Justice’s ATF also has several dozen facilities that ultimately fall under both the DHS regulations and ATFs.

Tom Temin: And to regulated entities, what does this look like? What’s the effect on them?

Nathan Anderson: Well, you can imagine if you’re a regulated entity, and you have to comply with a number of requirements, that’s one thing, particularly if you can kind of anticipate what those are. But when you’re also hit with another round or two of requirements, sometimes they are anticipated, and sometimes they’re not, you can imagine there is a regulatory burden. Now, I want to make sure I give proper credit to DHS and the chemical facility anti terrorism standards program, because it is a bit of a newer program than some of the others. And they recognized that in many cases, there could be this kind of duplicative information requirement. So in the paperwork that the regulated facilities are subject to, they are told that in many cases, the same information can be used to comply with multiple programs. But I think when we started looking under the rocks, we realized that while that may be true in paper, it’s not always true in practice. And one facility told us that the CFATS program, which is the chemical facility anti terrorism safety program under DHS did not accept a security plan that it had prepared to meet a DOT program requirement. And instead, they had to go back and prepare different paperwork that said the same thing.

Tom Temin: Yeah. And that’s something that the government writ large, successive White House’s have talked about over the years, is the idea that at least from the outside, there should be a one portal approach so that the entity dealing with government doesn’t need to understand the arcane plumbing and overlapping programs that might exist behind that portal. And that’s the government’s problem. But it seems like they haven’t really lived up to that. But they do exchange some information, correct? You found there is a pretty good level of cooperation among them.

Nathan Anderson: Yeah, again, you know, let’s give credit where credit is due, there is an executive order on this executive order 13650, that establishes this chemical safety and security partners working group. And that working group is intended to be a forum for sharing information so that those programs that do touch on the same facilities and engage with the regulated community from a couple different angles can share information with the idea of reducing that duplication.

Tom Temin: And does that duplication and overlapping have a cost? Does it have a material effect on the government’s ability to make sure chemicals are handled, moved, stored safely?

Nathan Anderson: Your question brings up a really important point, at the end of the day, the intent of these programs is to ensure safety. But there is a cost, there’s a cost to the regulated community. Those people who depend on the government functioning in such a way that is ultimately a smart way of doing business, if they’re having to duplicate their own efforts, that’s a cost to them. And then I would also add, it’s a cost to the government when the government, the right hand doesn’t always completely know what the left hand is doing. So the government is doing twice what it should only do once.

Tom Temin: And you’ve got quite a list of recommendations here. Seven in all. Just characterize what they’re all aimed at.

Nathan Anderson: Yeah, happy to. The seven recommendations do speak to the fact that there are a number of different federal entities involved. But the spirit or the essence of these recommendations is really to enhance information collection, to share it across the agencies to support more informed decision making streamline some reporting requirements for the regulated entities, and then take steps to reduce the duplicative efforts that are related to the programs. I’d be remiss to not bring up the security gap aspect as well though, and we did find from a fragmentation angle that some programs that are kind of similar in wording are nevertheless exempted for the facilities, certain facilities are exempted from the chemical facility anti terrorism standard program. And when we looked at these, we found that drinking water systems and wastewater systems, while they have similar requirements under EPA, the way those requirements are carried out on the ground does not give the same level of assurance from a security perspective. And that’s the fragmentation angle. And we have a recommendation to speak to that as well. But the security gap needs to be filled.

Tom Temin: But essentially, you are ordering all the agencies to up their degree of cooperation with one another such that the outcome of this would be a more coherent type of regulation framework, is that a safe way to put it?

Nathan Anderson: It is indeed, that’s a good way to bottom line it.

Tom Temin: Alright, and what did the agency say? Are they aware of the fact that they’re a little bit in the dark with respect to one another?

Nathan Anderson: I think the agencies recognize that they want to collaborate, they have a form collapse for collaboration, what sometimes is the underlying root cause is the lack of available data. So they’re not all singing off the same song sheet with respect to which facilities do require a certain information. And so the federal departments and agencies that we directed our recommendations to a uniformly agreed, these are steps that need to be taken. The one exception was EPA, when we talked about filling those security gaps. But it’s an important nuance, they said they didn’t necessarily agree that they had to do an assessment to fill this security gap or identify those facilities where such security gaps may exist because they believe that the GAO report already did that for them, but they are behind the spirit of the recommendation.

Tom Temin: Of course, the EPA leadership is going to change and will have changed since this came out. So maybe you’ll get a different answer this time.

Nathan Anderson: Well, as a matter of protocol, we give the agencies about 180 days to respond to our reports formally, in terms of the recommendations that we’ve asked them to execute. And they’ll tell us at that time, whether or not they will implement these recs.

Tom Temin: Got it. And in this topic here of duplication/overlap, the GAO is about to come up with a list that it does every couple years, right, of duplicative and overlapping programs. Do you know when we can expect that one?

Nathan Anderson: Yes, that high-profile GAO product will be coming out here within the next several months where we corporately identify a number of federal programs where there may be duplication, overlap and fragmentation, and also cost savings. And the Comptroller General will be leading that charge very soon.

Nathan Anderson: That point definitely does underscore what we’re dealing with in this space too. When you have a an agency that’s dealing with explosives, and then you have another agency that is dealing with chemical facilities writ large, you do have this situation where there are kind of different parameters around the program, and that can ultimately lead to some disagreement over the extent of regulation. But if you look at this through the lens of the regulated community, what is fair to those who have to comply with these requirements? The point is, if they’re already complying with one that does the same thing, maybe they shouldn’t have to duplicate their investment.

Tom Temin: Nathan Anderson is director of the Homeland Security and Justice team at the Government Accountability Office. Thanks so much for joining me.

Nathan Anderson: Thanks Tom, appreciate it. 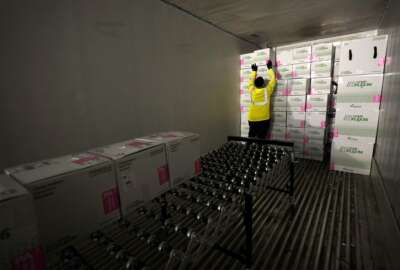