With the enactment of the Federal Acquisition Streamlining Act (FASA) in 1994, there was hope that a new era of streamlined acquisition would allow the government to access rapidly the commercial technology and services needed to permit it to meet the challenges of a new century. FASA requires that agency procurement officials, to the maximum extent practicable, acquire commercial products, services and nondevelopmental items that are not commercial products to meet the needs of the...

With the enactment of the Federal Acquisition Streamlining Act (FASA) in 1994, there was hope that a new era of streamlined acquisition would allow the government to access rapidly the commercial technology and services needed to permit it to meet the challenges of a new century. FASA requires that agency procurement officials, to the maximum extent practicable, acquire commercial products, services and nondevelopmental items that are not commercial products to meet the needs of the agency. As such, FASA provided the government with a framework to capitalize on the research and innovation of the private sector by leveraging streamlined access to the competitive, commercial marketplace. In implementing FASA, Congress required that commercial item contracts include, to the maximum extent practicable, clauses that were consistent with customary commercial practices or otherwise required to implement laws or executive orders.

Although FASA’s implementation started out with promise, 27 years on we have witnessed regulatory, operational and procedural steps backward. In 1995, there were 28 Federal Acquisition Regulation clauses that could be included in a commercial item contract, with only six of the clauses required. Today, 94 FAR clauses can be included in commercial item contracts, with 34 of the clauses required. Regarding FAR clauses that flow down in subcontracts for commercial items, in 1995 there were only four, and today there are 22 clauses that must flow down.

Considering the intense effort that went into acquisition reform in the 1980s and 1990s (for example, the “Section 800 Panel” review of laws affecting defense procurement and its subsequent report; multiple hearings leading up to the drafting and enactment of FASA and the Clinger-Cohen Act; and subsequent efforts to modernize information technology acquisition), this turn of events is disheartening. It is as if the institutions of government have exerted the equivalent of a gravitational force, pulling the system back decades. In its wake, this retreat leaves a nation at risk from near-peer adversaries unencumbered by our self-imposed processes. Undoubtedly, there are many factors at play here, but for the purposes of this discussion, we focus on the following:

Government fundamentally does not understand how private firms operate in the market. As evidenced by the delays in processing modifications to address inflation on Multiple Award Schedule (MAS) contracts (and the loss of orders for tens of thousands of products as a result) despite government policy changes to expedite those modifications, there is a gap in the government’s understanding of the pace of business; the rapidity of change that can and does occur in supply chains, and the need for business to cover its costs. The impact of these delays is the proverbial “straw that broke the camel’s back.” MAS contractors, especially small businesses, are focusing on alternative market activities that lead them to avoid the government market or utilize different government channels, like open market purchases outside typical government contract channels. If the government wishes to capitalize on the benefits of competition for commercial products and services, it needs to understand its contractor-partners in this effort and recognize that, in the global market, its market power to drive unnecessary terms and conditions is limited.

Government is increasingly focused on process and regulatory compliance over capability and contractor performance. Under this paradigm, government relies on a set of processes purported to support achieving its ends. Unfortunately, however, processes become less about achieving ends as much as an end unto themselves. Discretion is reduced, as is collaboration with industry partners, and in the end, with checklists met, basic compliance is achieved, but procurement results in meeting customer agency needs are sub-optimal. It is akin to what Professor Steve Schooner has called, “the tyranny of low price,” where the long-term best interests of agencies, industry partners and the nation are not met.

The foregoing problems have been facilitated, at least in part, by a systematic re-regulation of commercial products and services contracting. With compliance or rule-based processes and reduced discretion and dialog, the only way to address market changes is through an increase in rules (more points to review on the checklist). Coupled with the foregoing increase in the number of contract clauses over time, the government continues a march backward to the over-bureaucratized environment that existed before acquisition reform. It restricts access to innovation driven by the commercial market, and it fundamentally harms small business access to the federal market.

Much has been made of the shrinking industrial base supporting the federal government, especially the falling number of small businesses in the federal market.

GAO and SBA did not articulate what is causing this drop in industry participation in the government-wide industrial base. Much of the decrease, we believe, can be attributed to the re-regulation of commercial item contracting.

The answer to these challenges has driven reform efforts in the past and needs to be reinvigorated now. Rather than retreat into the bureaucratically sclerotic system of the past, the government can recommit to streamlining commercial products and services procurement by de-regulating the process, training program and contract personnel and enhancing their discretion, and facilitating the dialog that allows it to collaborate with its industry partners. The Myth-Busters campaign remains the seminal policy statement regarding positive collaboration/communication between government and industry. Its guidance for contracting personnel is more vital than ever in ensuring the procurement system delivers best value customer agency mission support for the American people.

The government can also seek new ways to utilize tools that facilitate access to the commercial market, like e-commerce, for broad commercial contracting, and it can access real data using Transactional Data Reporting. The benefits of competition and the commercial market are game changing. By so doing, the government can leverage market competition to drive down pricing and incent market participation by the innovators it needs to address the global challenges our nation faces.

Decline is not inevitable here. The government simply needs to act, and when it does, the Coalition and its members will be here to assist it in any way we can. 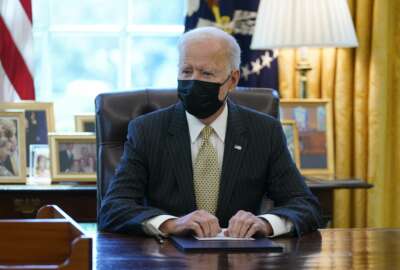