In the latest in a string of executive orders, the Biden Administration has underscored a buy-American policy for federal procurement. It establishes a Buy American overseer at the Office of Management and Budget and clamps down on U.S. content in what agencies buy. With reaction from services contractors, the president and CEO of the Professional Services Council,...

In the latest in a string of executive orders, the Biden Administration has underscored a buy-American policy for federal procurement. It establishes a Buy American overseer at the Office of Management and Budget and clamps down on U.S. content in what agencies buy. With reaction from services contractors, the president and CEO of the Professional Services Council, David Berteau, joined Federal Drive with Tom Temin.

Tom Temin: David, they have gotten off with a flurry, haven’t they?

David Berteau: Tom, thank you for having me on. And yes, we have a lot of executive orders and other memos coming out. It’s worth noting that in two days and one evening, President Biden has issued more executive orders in his first week than his four predecessors did combined, actually I haven’t gone back, it might be his last six or seven predecessors combined, I only went back to the beginning of the Bill Clinton administration in 1993. So there’s been a lot of them out there. And this particular one on Buy America has great interest to people in the services business. As you know, half of government contract spending is on services. And what Buy America means for services is a little different than it does for the manufacturing industry.

Tom Temin: Yes. Because when you’re buying services, you’re buying intellectual work by people, for the most part, and a lot of contractors may employ people from other countries that have the particular talents needed. So is that the issue for services?

David Berteau: Well, that could be one of the issues. But let’s look at one that you and I’ve talked about before, right. The ban on using products from banned Chinese companies, Section 889 of the FY-19 National Defense Authorization Act, right. So that the government properly prohibited consistent with the law that every contractor and down into subcontractors, can’t use this prohibited equipment, right. But here’s a great opportunity for emphasizing Made in America. But the government did not give us as companies, either of the following things. Number one is, what exactly is the list of banned equipment, we know the banned companies, but you also got to ban the subsidiaries and the affiliates. And they haven’t given us a list of those. So it’s up to each company to determine what products to ban. But even more importantly, is if you get rid of those products in your system, what do you replace them with? Where’s the list of available products that would bolster, what would support this executive order. So we provided that input already to the administration, they have taken it, and I think they will be doing something in that regard. This will make it a lot easier for companies to do what makes sense, which is to invest in America.

Tom Temin: Well, the other issue is if you buy American branded electronic gear, that doesn’t mean there’s very much US content, it could be assembled in the United States. But the circuit boards could have been made anywhere. And of course, DoD has an initiative on circuit boards, thanks to one of the NDAAs. And then the chips and parts on the board are almost assuredly not made in the United States anymore.

David Berteau: And this is a balancing act that has to be maintained all through the execution, that’s hundreds of billions of dollars of government contracts and millions of contract actions. And you don’t want to have to slow down on the performance of the actual work that needs to be done. So the balancing act as we migrate towards making more available from an American source, whether it’s in the components or in the assembly or in the workers. You also have to maintain the work that needs to be done, because part of rebuilding the trust in government that’s so essential going forward is to have that government perform better. And part of having the government perform better is having contractors be able to get their jobs done.

Tom Temin: I guess, if you’re in the shipbuilding business, there is strong support for the Jones Act, which I think probably will be a relief to some sets of contractors serving the government.

David Berteau: There is. And a couple of times in my career, I’ve been a big defender of the Jones Act, particularly for national security purposes, because I do think it makes sense to have a domestic shipbuilding industry. And the only way you do that is to actually buy ships from that industry. But there’s a lot of competing interests that come into play there as well, because obviously made in US oftentimes means it might be more expensive. And this is another competing aspect with respect to contracts, because if your drive is to always have the lowest price, as opposed to the best value, then that won’t necessarily drive you to US made products. On top of that you need to incorporate into best value, what’s the value of Made in America? And how do you calculate that into the process? This is going to be very, very tough in execution. We’re going to be watching it closely and providing feedback as we go.

Tom Temin: Yes, we’ll see how many iPhones agencies continue to buy. And we should acknowledge something that happened at the end of the Trump administration with respect to the PALT and LPTA. Same letters used in two ways. Procurement administrative lead time and lowest price technically acceptable. Tell us what happened there and why it matters.

David Berteau: Tom, it was not only a spate of new executive orders and memos from the incoming administration, there was a slew of new executive orders and memos from the outgoing administration, which is not all that uncommon. One of them of great note to us, of course, was the final FAR rule on low price technically acceptable contracts. And the basic idea is to tell the government contracting officers and programs that it’s okay to use lowest price technically acceptable contracts, under the right circumstances, with the right documentation. And we’ve been pushing for this at PSC for quite a number of years. This is in response to statute that passed almost two and a half years ago now. So it’s finally been implemented. The problem is the enforcement, the implementation. So the guidance is out there, but who’s going to make sure that contracting officers are following it? There’s no provision for that in the FAR at all. And I think in the end, it falls to associations like PSC and our member companies to report to us when they’re seeing activity that looks like it’s maybe deviating from what the guidance is, and to move forward on that. Similarly, with the PALT, the procurement, administrative lead time, it’s the biggest complaint companies have, it takes too long to award a contract. And so the way you manage to reduce that is, first of all, define what it is, which this memorandum does. Secondly, actually measure how you’re doing against it, because if you don’t measure a baseline, you don’t know if what you’re doing is making it better or not. And third, is to make it publicly available. Here, the memorandum falls a little bit short, because we’re still going to have to dig very, very hard. An earlier version of this implemented a couple of years ago by the Defense Department may well have produced better definitions and tracking internally, but we’re not getting any data out of DoD that lets us have any visibility. And how can you have accountability if you don’t have visibility?

Tom Temin: Alright, so some work to do on both ends. And getting back to some of the Biden executive orders. I think a lot of the people in the IT field here, and that’s a lot of the professional services contractors, were taken aback, or I guess, in a good way, if it happens, by that $9 billion in proposed spending for the Technology Modernization Fund, we’ve talked about that before. Of course, that takes congressional action, even though the executive order might say this would be a great thing, handicapping whether that’ll happen or not, it could have a big effect, though, should Congress go along.

David Berteau: It’s a significant signal of a step in the right direction, which is modernizing legacy systems, both IT systems and all government systems and processes. And one of the things that we’ve seen in the last couple of months as a result of the revelations from the SolarWinds debacle, and the penetration of many government systems, is that we need better systems inside the government. So this is a huge signal. The process by which this is implemented, probably needs to be more than just the Technology Modernization Fund, or at least the way it was administered by the previous administration. And in addition, there needs to be a focus, I think, in the whole infrastructure program that the administration puts out on not only rebuilding America’s infrastructure, but rebuilding the infrastructure for the federal government. And I would put that actually as a top priority.

Tom Temin: And there’s hint in the way they described it in their summary of the legislation they’d like, is to overhaul the payback mechanism that currently exists for Technology Modernization Funds. I got the distinct sense, they would like to just do away with it, not bother, which would make it easier on contractors and agencies in setting requirements.

David Berteau: We need to be careful here because the value of modernizing, like legacy systems, first of all, is getting better performance from the modern system. But you only realize both the monetary benefits and the performance benefits if you actually get rid of the legacy systems that you’re replacing. And what we’ve seen all too often is you bring the new in, but you keep the old as well. And I think it’s really critical that we have a path not only to modernizing, but to eliminating the legacy systems. And this is hard, Tom, because the losers of the legacy systems know who they are, the winners of the modernization don’t, and losers fight hard to keep what they have. So there needs to be a visible trade-space that says, how do you migrate the resources? How do you migrate the results from the legacy system, not just install the new stuff? You run into this every time you upgrade your computer at home. How do you take care of the old stuff? You probably like I do, you’ve got hard drive stored around with old stuff that you don’t access, but you know it’s there if you need it.

Tom Temin: Well, if I don’t need it, I just put an electric drill through it and hope what I saved isn’t still in the cloud someday. David Berteau is president and CEO of the Professional Services Council. A lot to unpack here and we’ll keep on doing it through the new year. Thanks so much for joining me.

David Berteau: You’re welcome Tom. And the pace is going to pick up, let’s keep at it. 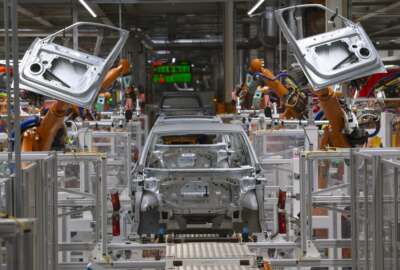