The Defense Department will be forming teams this September to give the ‘yea’ or ‘nay’ to DoD data centers across the globe.

The Pentagon has been trying to close unneeded data centers for about five years now.

The teams will go to selected data centers owned by DoD and using set criteria decide if a data center should be closed and where the data in the center should go, DoD Chief Information Officer Terry Halvorsen...

The Defense Department will be forming teams this September to give the ‘yea’ or ‘nay’ to DoD data centers across the globe.

The Pentagon has been trying to close unneeded data centers for about five years now.

The teams will go to selected data centers owned by DoD and using set criteria decide if a data center should be closed and where the data in the center should go, DoD Chief Information Officer Terry Halvorsen said during a July 15 roundtable with reporters.

“The endgame, what we want to do is close these, meet mission, which means that they can handle the storage, they can connect without latency and they’re secure, but do that at the best available price,” Halvorsen said.

“What they cost, that doesn’t make them an immediate candidate for closure, it just means if I close them the potential for savings is higher because that’s where the biggest pile of money is,” Halvorsen said.

The teams will also look at the level of data in those centers. That will determine if the data can be moved and where it can be put.

Halvorsen said he has no problem putting publically accessible data in commercial centers. A lot of DoD’s data, however, falls in the gray zone of being unclassified, but still critical. Those can go into higher security commercial centers and Halvorsen said if the pricing works he has no problem putting the data there. As for highly critical information, only a few companies are cleared to handle that information, but they also may be stored in government data centers.

There is no end date yet for when the datacenter review teams will finish up, Halvorsen said.

The effort comes from the governmentwide Federal Data Center Consolidation Initiative, which requires government agencies to close datacenters and use more efficient means of storing data.

The Pentagon has lagged behind on the initiative’s goals, however.

A March 29 DoD Inspector General report found the Pentagon failed to consolidate 40 percent of its data centers by the end of fiscal 2015.

“Of the 3,115 data centers reported in DOD’s Data Center Inventory Management system, only 568 (18 percent) were closed by fiscal year end,” the report stated.

DoD even had trouble figuring out how many data centers it actually owns.

After about a year of counting, 786 datacenters were on the books. There were 2,100 “data centers” on the list by the time DoD revised its definitions to include smaller rooms and closets, and it eventually quit counting.

In April, Halvorsen began hinting at the evaluating data centers based on cost.

He said the department is less concerned about the number of data centers it owns than how much they cost to operate. And the cost of labor is the main metric DoD will use to decide whether a particular data facility is unduly expensive.

“The biggest cost driver we have in our data centers is people, and what we’ll look at is how many people are doing what. If you still have a lot of people doing monitoring and maintenance of servers, that’s a bad use of people,” he said. “That can be automated today, and in our efficient data centers, that’s exactly what we’re doing.”

This week Halvorsen and key U.S. allies are meeting with top IT firms on the west coast.

During the five-day trip, Halvorsen and the allied leaders will meet with large established companies, such as Microsoft, Oracle and Amazon, to discuss topics like identity management, data sharing and innovation.

Halvorsen said cloud services are part of what he will be discussing with the companies.

“As we go to visit the companies that we are already doing business with … we’re looking at what are those companies doing that might benefit us in the future, how are they maturing their products,” Halvorsen said. “At Microsoft, we are certainly going to talk about what they see as the vision of cloud computing we’re all interested in cloud computing. Microsoft is doing 365 cloud, it’s doing well in the Fortune 100, so we want to know about that.” 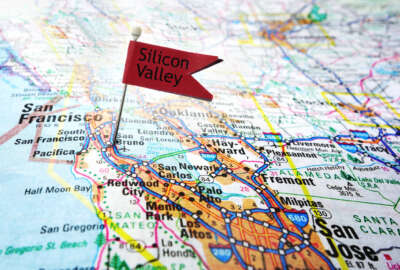