Tom Temin:  And Stephanie, let’s start with executive order 14055 to reduce disruption in the delivery of services by forcing new winning contractors to take on the employees of those that they displaced. The Professional Services Council sees this as kind of pointless, right?

Stephanie Kostro: So Tom, as you will know, the President signed out a bunch of more than 90 executive orders in the first year of his presidency. And one of them was this executive order 14055, which is non-displacement of qualified workers under service contracts. This will sound very familiar to those who have been in the government contracting business in the services sector for a while. This is not the first time this has happened. This dates back to the mid ’90s. It has been a rule twice before, at least twice before. And the Professional Services Council, (PSC), has been expressing concern about this perspective on the labor force for a while. So this is sort of where government contracting and labor policy intersect in a major way. Because this has been a rule twice before, most recently, under the Obama administration. We’ve been asking them to start tracking, if the goal, and it is stated in the executive order, is to create a seamless transition between two services contractors,. The new awardee can offer employment or has to offer employment to certain workers from the incumbent contractor. What does that look like? Is it actually a more seamless transition? Is it more efficient? Is it more economical? And no one has tracked this, even though this has been the rule twice before, there’s been no validated study or data to support that this is actually a good idea. And for several reasons PSC thinks it’s a bad idea. It is answering a problem, solving a problem that does not yet exist, and may not exist at all. The one major concern that we have at the Professional Services Council, other than the inability of the executive branch to seem to track whether this works or not, is that it treats contractor employees as though they themselves are a government asset. It is saying we would like to treat you as a federal employee, and you have to continue doing your work, regardless of which company you work for. This flies in the face of what is traditionally a corporate privilege of hiring, retaining, training, promoting, and otherwise making happy their employees. They’re treating them like they belong to the government, and that really is something the Professional Services Council has strong concerns with.

Tom Temin: And isn’t there also the question that the very reason the government might change contractors is because of the performance of the crew that was there, for the first time around?

Stephanie Kostro: That is 100% the case, you know, sometimes you don’t want the contractor employee being assigned to that contract. And then that tends to be a problem. What also happens is the government tends to, even though they they talk about wanting to get the most qualified contractor on contract, oftentimes, they award to whoever offers the lowest price and technically acceptable proposal. If that is the mindset going in, they may actually be damaging the wage futures of whoever those contractor employees are because they have a right of first refusal to go and work for a contractor who may actually be paying them less, or offering them fewer benefits. And  is this is a set of concerns that we have as Professional Services Council. And I think going forward, there was a comment period that expired last week. We offered the recommendation that they withdraw this proposed rule that hit the street in which we were commenting. We also suggested that they revoke or even just rework the executive order that came out 14055 to start to address some of these issues. But we live in a real world. This has been a rule in Democratic administrations in the past, I suspect it will go through. So we did offer several constructive comments based on the rule that was put out, but our recommendation is that they really think hard about whether this actually does what they intended to do.

Tom Temin: We’re speaking with Stephanie Kostro, executive vice president for policy at the Professional Services Council. And another resurrection, again, this comes and goes depending on the administration, is the use of project labor agreements in major construction. That’s basically a stop to the construction unions. What they mean is what they intend is for union wages, even in largely non-union areas. So does this affect professional services contractors? I suspect at some level it does.

Stephanie Kostro: It does. Thanks for raising this. Project labor agreements are something that we at the Professional Services Council are very familiar with. I  would say this is an executive order. And I believe the number is 14063? One of the ones that came out last year is really to talk about union agreements under major construction contracts and contracting officers could require project labor agreements. They have that authority. This is what mandates them in the proposed rule then, and would mandate that any large scale construction project defined as $35 million or more would require PLA’s, project labor agreements. We wonder about the applicability of this, because it assumes that these labor agreements are for unions. And that’s not always the case, as you pointed out. And so I think, you know, we’re going to offer some comments. This came out for comment as a proposed rule last week. And we hope to provide our perspective on what this means going forward. There are exceptions. You don’t have to if you don’t feel like it’s appropriate to require  the PLA’s. That said, contracting officers are not known for being mavericks, they do like to stick to what they know, and for very good reasons, in many cases. And so I don’t know that that exception will be exercised very often.

Tom Temin: And just a quick question on the inflation reduction act, or so called, because there’s some debate as to what effect it will have on inflation. But we do know that it does commit the government to a lot of money here and there, largely in the form of tax breaks and tax credits, but also some expenditures. What have you seen on that that might affect again, services contractors in the relationship with the government agencies?

Stephanie Kostro: So this is a fascinating area for me, Tom, because you know, inflation is eating our lunch in the government contracting world right now. The impact on workforce, we have so many more jobs that are unfilled with few job seekers. And so if you can make more money in the purely commercial sector, because their wages can be adjusted more easily than in the government contracting world, where sometimes, oftentimes you’re tied to a schedule of increases and inflation has outpaced that. Tracking inflation for quite a while. And, you know, if you look at what the Biden Harris ticket ran on, was to look at COVID, recovery, jobs, climate, social justice, and the like. We’ve been waiting to see what might come out on the climate front. And this bill is what that is. So to call it, the inflation reduction act is an interesting name. But at the end of the day, I think this is sort of where the Biden administration is coming down on climate. It does call for quite a bit of investment in energy security and climate change. And we are unpacking that because the bill just recently passed. That said, for government contractors, it really is in the area of energy security, climate change. And it’s not so much about helping those companies that are struggling right now to retain their workforce, and to keep to their schedule and to their costs that the outlines in their contract to bear. So I think at the end of the day, I’m looking forward to unpacking this and finding out how it will help reduce inflation for the government contracting, particularly in the services sector. But right now, it’s difficult for me to see how that helps.

Tom Temin: Stephanie Castro is executive vice president for policy at the Professional Services Council. Thanks so much for joining me. 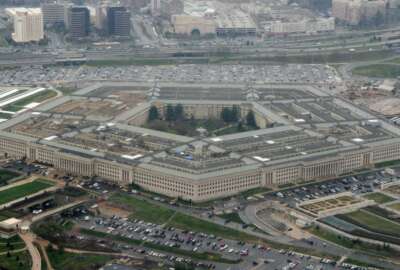 Services contractors gear up for a battle with the Biden administration

Polaris, Services MAC will be the first governmentwide contracts without maximum dollar values