The troubled F-35 doesn’t just have an automatic logistics information system — it’s got an autonomic one. But after 20 years of development, the system, known as ALIS, doesn’t work. It spits out wrong information about the condition of the plane, ultimately harming readiness. Once again the Government Accountability Office has looked into the F-35 and ALIS....

The troubled F-35 doesn’t just have an automatic logistics information system — it’s got an autonomic one. But after 20 years of development, the system, known as ALIS, doesn’t work. It spits out wrong information about the condition of the plane, ultimately harming readiness. Once again the Government Accountability Office has looked into the F-35 and ALIS. With the latest findings, the GAO’s director of defense capabilities and management issues Diana Maurer joined Federal Drive with Tom Temin.

Diana Maurer: Great to be back on the show, Tom.

Tom Temin: So ALIS has become kind of like an opus for you to follow the development of the software system for this plane. Why the latest look at it and what did you find that’s new?

Diana Maurer: Well, we thought it was definitely worth looking at this issue. And of course, as you noted, we’ve been looking at this for some time. We issued our first report on ALIS six years ago in 2014. In some respects, some of our main findings aren’t necessarily new. In 2014, we reported concerns among the users — so pilots maintainers, and commanders, at that time, were very frustrated with ALIS. They thought it was clunky. They were concerned about erroneous information or missing information coming out of the system. We heard the same thing when we did our audit work for our report, which we did site visits to five different air bases here in the US during 2019. We heard very similar things. And so it’s continuing to be a problem. Among other things, we’ve recommended that the DoD take another look at this program, develop a strategy, figure out what they need to do and assess whether they’re making progress.

Tom Temin: Would it be possible for this plane to do what it’s supposed to do without ALIS if it just operated as a regular plane and they fixed it based on other parameters or other tests, and then just did it conventionally?

Diana Maurer: The short answer to that question is no. ALIS is tightly intertwined in the ability to use the aircraft. It not only provides information on how long It’s operating and the status of a number of parts and key systems on the aircraft — it’s also the mechanism for uploading and downloading mission information which the pilots need when they’re flying the aircraft. It’s plugged into the logistics system that provides spare parts and support for the system. When you talk to folks at the joint program office, they sometimes refer to ALIS as one of the three major portions of the aircraft — that would be the engine, the aircraft and then ALIS being the third. So it’s really critical to the success of the operation of the plane.

Tom Temin: Now, a few years ago, some of the Air Force leadership got up on their hind legs and really chastised the vendor, Lockheed Martin, pretty vociferously and loudly and they said, well that kind of yanked the program back into some kind of reality or compliance. Why aren’t they doing that now, and what’s your sense of the back and forth between the contractor and the program office leading this?

Diana Maurer: The current state of play is the program office and DoD more broadly is starting to move towards the next iteration of ALIS something called ODIN, which is meant to fix and address a number of the major problems that have plagued ALIS for a number of years. A central part of that approach is having the Defense Department get more access to technical data and intellectual property that for many years has been the bailiwick of Lockheed Martin. And that was something that was baked in to the broader approach with sustaining the overall system from practically day one, and this F-35 program is nearly 20 years old now. Practically from day one, the government made a decision to hand sustainment nearly lock stock and barrel over to the contractor, and that includes ALIS. So fast forward to today, it’s not terribly surprising that Lockheed essentially owns the system., they operate the system, they pretty much own all of the technical data — that was by design. DoD currently is in conversations and discussions with Lockheed, trying to get back some of that technical data and some of that intellectual property, as the department pivots to this new system, ODIN.

Tom Temin: I guess not to be too cynical, but really the profits in programs this complex are really in sustainment over the long run, not in the margin on selling the pieces, that is the individual planes.

Diana Maurer: That’s absolutely the case. I mean, when you look at the total lifecycle cost for the F-35, and this was over a 60 year period, estimated to be about $1.6 trillion. 1.1 to 1.2 trillion of that amount is for sustainment costs. So it’s spare parts, it’s support, it’s for systems like ALIS eventually becoming ODIN and then becoming who knows what 30 years down the road. I don’t want to throw Lockheed necessarily under the bus here. This was by design. You really can fault the government for never setting clear requirements for ALIS in the first place. When you go back to the original documents, really the only requirement that the government gave Lockheed Martin was to establish a logistics information system. There were not specific requirements on things like deployability, about having accuracy built into the system, about having adequate training and a number of the other problems that we’ve identified over the years. So it really is a partnership, and there’s certainly a blame to go around on all parties.

Tom Temin: So will ODIN replace ALISall together? Is it new code? Is it a new software system?

Diana Maurer: So we at GAO currently have audit work looking at this, and at last week’s hearing the DoD officials, Undersecretary Lord and General Fick who’s at the Program Executive Office talked about ODIN as being a game changer for ALIS. It’s really an evolution of the system. It’s an approach that brings the software from ALIS, which really dates back to the 90s, into the present day. So faster upgrades, being able to respond to user needs more efficiently and effectively. And from our perspective at GAO, hopefully having mechanisms in place to determine whether or not the system is working as intended. Now the jury is still out on this, we’re still doing the audit work. So I don’t want to criticize them unnecessarily, nor do we want to give them a passing grade on this.

Diana Maurer: Yeah, so that’s definitely something that the joint program office and the services, including the Air Force, are working with Lockheed on. It’s definitely the department’s intention to get additional access to technical data. And last week, the folks from DoD testified that they have sufficient access to intellectual property and technical data to do ODIN right. Again, I hope that is the case. We’ve certainly seen a lot of progress in terms of addressing our recommendations from prior reports. So we’re encouraged by where the department is at. We still have to do our due diligence dates and make sure that the reality on the ground matches what leadership has been saying about.

Tom Temin: Now, if a civilian agency or even a DoD agency had developed a standard software application in the 90s, they would be all about replacing it now, something with modern code and cloud and all of this. And so it sounds like even after ODIN, they’re going to end up with a 30 year old software system, the copies of which haven’t even all been made yet.

Diana Maurer: And that’s a great point. I mean, the F-35, like pretty much every major weapon system that the military uses, is essentially a sophisticated piece of software, right. And so all of these systems, including the F-35, will need to be continually maintained from a software perspective and upgraded to meet new mission requirements into the counter threats and so forth. So whatever the approach that the department is taking right now to developing ODIN and getting that implemented over the course of the next few years, will need to be agile enough to be able to respond to future needs. Because you’re right, we don’t want to, definitely wouldn’t be me and it wouldn’t be you, we wouldn’t want to have another conversation 30 years down the road where someone’s saying, boy it’s a shame that Odin is using technology from the 2020s

Tom Temin: Diana Mauter is director of defense capabilities and management issues at the Government Accountability Office. Thanks so much.

Diana Maurer: Thank you very much. 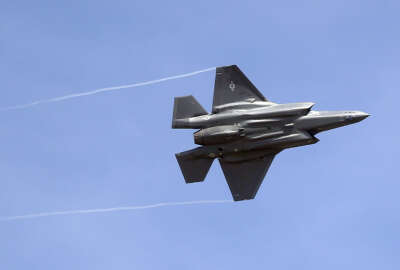