The Census Bureau is in the middle of its one and only dress rehearsal for the 2020 population count. But there’s a lot more scrutiny coming from Congress, now that the agency plans to ask respondents about their citizenship status in the decennial count for the first time in 70 years.

The Census Bureau is in the middle of its one and only dress rehearsal for the 2020 population count. But there’s a lot more scrutiny coming from Congress, now that the agency plans to ask respondents about their citizenship status in the decennial count for the first time in 70 years.

Trey Gowdy (R-S.C.), the chairman of the House Oversight and Government Reform Committee, said lawmakers are keeping a close eye on the rollout of 2020 census preparations, including the readiness of IT systems.

“The accuracy of the 2020 census rests in large measure on the successful deployment of IT systems,” Gowdy said Tuesday.

“The appropriate action would have been to test the question to see if those concerns were borne out. That is what six former Census directors recommended. Instead, the administration just flipped the burden. They added a question and claimed that nobody demonstrated response rates would be lower,” Cummings said.

Justin Levitt, a former deputy assistant attorney general of the Justice Department’s Civil Rights Division, said adding the question to the 2020 count without adequate testing will hurt the response rate.

“The [Commerce] secretary decided to take the citizenship question from the middle of a 28-page survey, and slap it onto the basic 10 questions asked of every man, woman and child in the country, exponentially raising its prominence and risking the basic count in the process,” he said.

Levitt said the last time the Census Bureau asked the public about citizenship, back in the 1950s, polls showed 73 percent of the public trusted the federal government. Today, however, that figure has dropped to 18 percent.

“If you add a toxic issue to a toxic climate, people won’t open the door,” Levitt said.

John Gore, the current acting deputy assistant attorney general at DoJ’s Civil Rights Division, was slated to appear before the committee but didn’t show up.

On Monday, ProPublica reported, based on documents obtained through a Freedom of Information Act request, that Gore asked the Census Bureau to add the citizenship question to the 2020 questionnaire.

Gowdy says he would be willing to subpoena Gore if necessary. But he added that bringing Gore before the committee doesn’t mean he’ll answer any questions.

“I can’t make someone talk. I can make them sit at that table and listen to our questions,” Gowdy said.

“The planned innovations and most of the systems designed for the 2020 census are coming together in the 2018 end-to-end census test,” Jarmin said. “We are maintaining a well-defined schedule and framework for releasing systems.”

The Census Bureau hasn’t had a permanent director in nearly a year. John Thompson, the last agency head, stepped down at the end of last June.

Jarmin estimates that 56 percent of households in the field test didn’t fill out a questionnaire. This week, the Census Bureau will send out about 900 enumerators to knock on doors and gather that information.

This is the first decennial count that will allow people to respond through the internet. About 64 percent of field test respondents answered online. That’s more than double the rate of people who mailed back their questionnaire the old-fashioned way.

David Power, the director of information technology management issues at the Government Accountability Office, said all but eight of the agency’s 44 systems IT systems still need to undergo some sort of testing.

Of those, 14 systems have significant testing remaining, meaning that they must undergo both systems and integrations tests.

“It’s important to note that once the 2018 end-to-end test is completed, there will be additional development testing that needs to occur in 2019 to address new functionality, additional scaling and performance issues, and defects found during the end-to-end test. This performance testing is critical to ensure that systems can handle expected peak loads,” Powner said, adding that Census will also need key infrastructure, like cloud computing and network security, in place for the 2020 count.

The Commerce Department said the citizenship question will be the same one that’s answered on the annual American Community Survey (ACS). But the ACS doesn’t go out to every household like the decennial census.

GAO has issued more recommendations on the 2020 census that have not yet been implemented. The federal watchdog also keeps the decennial count on its list of high-risk government programs.

However, Powner said the Census Bureau is making good progress to implement those recommendations.

“I think clearly they’re focused on the right things, getting the systems developed, tested and secured. The issue here is they were late. There was a big cost increase, a lot of that cost increase went to the IT systems,” Powner said.

Last month, the agency updated its estimate of the lifecycle cost of the 2020 count to $15.6 billion, a 27 percent increase from what it projected in October 2015.

Earl Comstock, the director of the Commerce Department’s Office of Policy and Strategic Planning, reminded lawmakers that the Census Bureau only uses the data it collects for statistical purposes.

“The fear that’s being placed out there is being placed out there by public officials who are, I think, generating something that’s not there. The bottom line is, this information is protected, it may not be used for immigration enforcement or any other purpose other than statistical purposes. That’s the message that the Department of Commerce will be communicating to the public,” Comstock said. 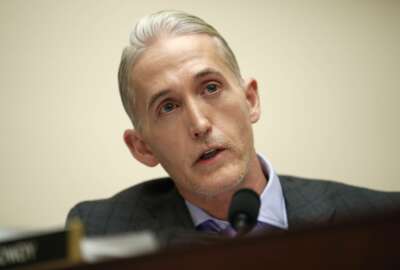