President Donald Trump’s budget proposal has definitely gotten the attention of the nation’s five million active and retired government workers. Even some of his biggest backers must be in a state of near-shock because of what it would do to their retirement plan, both while they are working and especially after they retired. In effect, they would pay more and get less if Congress goes along with the budget plan.

The proposal to reduce future...

President Donald Trump’s budget proposal has definitely gotten the attention of the nation’s five million active and retired government workers. Even some of his biggest backers must be in a state of near-shock because of what it would do to their retirement plan, both while they are working and especially after they retired. In effect, they would pay more and get less if Congress goes along with the budget plan.

The proposal to reduce future benefits for retirees while making workers pay up to 6 percent more just to stay in the program isn’t new. It’s been tried before in various forms, but fell by the wayside because of political gridlock. But now Republicans control the White House and the House and Senate. That’s true for most other changes the Trump budget would make. They’ve been proposed before but never when one political party controlled both chambers of Congress and the White House.

Normally the budget from a president is more like a huge, detailed shopping list as opposed to an approved blueprint. It is handed over to 500-plus members of Congress. Many of them are automatically hostile either for political reasons or because they have constituents and special interests to protect. Despite what the president says he wants, Congress does the actual picking and choosing. That’s why budgets are usually more of a wish list than a picture of things to come. This time, things could be very different for working and retired feds.

Most previous presidents of both parties proposed changes (usually reductions) in civil service benefits that were debated but not approved.

There was a slight change during the Obama administration, which required newly hired feds to make larger contributions to the FERS retirement system. Other than that, nothing. No significant changes in decades. The gridlock that editorial writers lament was, in many respects, the best friend besieged federal workers had. When your pay and benefits are on the chopping block, nothing is often better than something.

In theory and on paper, gridlock should be a thing of the past. At least until the mid-term election next year. But maybe not. The GOP-controlled Senate and House act at times as if they were operating on different planets. House Speaker Paul Ryan increasingly spends time trying to ensure that Republicans don’t take a hit next year, especially in the House. Many people consider the first mid-term under a new president as a referendum on his performance. Democrats lost 54 seats in the House of Representatives in 1994 (Clinton’s first mid-term) and another 63 in 2010 (Obama’s first mid-term).

At least four GOP House members resigned their seats this year to take jobs in the Trump administration. The seat held by Interior Secretary Ryan Zinke in normally red-state Montana went to Republican candidate Greg Gianforte, even though the Democratic challenger appeared to close the gap with his GOP opponent. Some members of the Senate, including Arizona Republican John McCain, have declared the Trump budget DOA (as in dead-on-arrival).

So even though lots can happen between now and then — including nothing — feds are right to be alert and alarmed about both the proposals, as well as the new political lineup.

All of the ”new” budget proposals aimed at the federal civil service retirement system have been proposed before. Some many times. But they never happened. But that could be different this time around because one political party, the Republicans, control the House, the Senate and the White House. That could be sadly significant for both working and retired feds. Of all their benefits, the retirement package is the jewel in the crown. The reason some came into government and why many stick around for a full career. The changes in the new budget:

The smallest state of the union, Rhode Island, also has the longest official name of any of the states: “State of Rhode Island and Providence Plantations.” 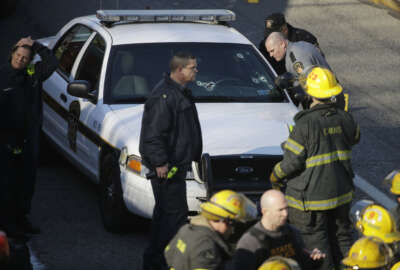