Congress tasked GSA and the Office of Management and Budget to set up a pilot e-commerce marketplace for commercial items using more than one portal...

Congress tasked GSA and the Office of Management and Budget to set up a pilot e-commerce marketplace for commercial items using more than one portal over the next three years. GSA used this first meeting to begin Phase 1 of  the effort to develop an implementation plan and come up with recommendations on what laws and policies need changing or updating to make this initiative come together.

As an ironic aside to this discussion that shows just how difficult this task will be, Sen. Rob Portman (R-Ohio) introduced legislation on Jan. 9 that would put a bit of a wrench in this effort.

The BuyAmerican.gov Act would require new guidance from OMB, the Commerce Department, the Federal Acquisition Regulations Council and others on how to make assessments on whether to waive the Buy American Act, and then GSA would develop a website to post publicly all waivers.

The Buy American Act, the Trade Agreements Act, the Berry Amendment, the Small Business Act and several others are up for discussion on what wouldn’t be required as part of these new e-commerce portals.

While the legislation is far from becoming law, the fact that Portman has bi-partisan support for the bill is a sign that some in Congress are paying attention to these acquisition laws and regulations, potentially making it more difficult for Congress to waive them for e-commerce initiative.

Let’s return to the listening session. GSA and OMB made it clear from the beginning, they were there to ask questions, listen to industry experts and gather information, and not to answer questions.

This left the audience with even more questions than answers.

As one of those members of the audience—kudos to GSA and OMB for opening up the event to the press—there were several questions and interesting items that emerged during the discussion.

Here are my two takeaways from the discussion:

Scorched earth approach will not work

The two executive representing programs under the Javits-Wagner-O’Day (JWOD) Act, such as Ability One and other procurement programs for people with disabilities, came out swinging the current laws and regulations as a reminder to OMB and GSA. Todd Tiahrt, a lobbyist for the National Association for the Employment of People who are Blind, repeated on several occasions that through “software algorithms” the portal could ensure they are meeting the laws and policies of the land.

“Buying online is an interesting concept, but should the government ignore current laws? I say purchasing can be convenient and comply with the laws,” Tiahrt, a former Republican congressman from Kansas. “What relief is necessary? The existing commercial systems are not subject to the FAR or JWOD or trade agreements, but the statutes should not be waived. Taxpayer dollars come with rules and accountability that is demanded by the public.”

He also talked quite a bit about online portals delivering “marijuana cookies and wine to our soldiers,” but the ridiculousness of that argument is a discussion for another time.

But Tiahrt seemed to miss the point of the discussion. Congress wants GSA and OMB to make recommendations on acquisition laws or policies need to be updated, changed or waived in order to make buying of commercial products better, faster and cheaper.

So making the argument that the statues are “the laws of the land and need to be followed” came off as out of touch and a bit misguided, given what Phase 1 of the initiative is about.

Kevin Lynch, president and CEO of National Industries for the Blind (NIB), took a more pragmatic approach to the discussion.

“There are reasons why these laws exist, for good policy reasons. When GSA closed its depots, they didn’t get rid of policies,” he said. “We updated our products by making our delivery models more efficient. We modified our processes and systems to deliver more effective services.”

Lynch said there is existing technology to help marketplace vendors comply with the Ability One mandate, and GSA is showing how it could work through its GSA Advantage portal.

“GSA also uses a remediation tool that is very effective to increase program compliance,” he said. “We’ve learned through past experiences of implementing new purchasing systems that it requires new training and education throughout the entire sector of users.”

Still, too often, Lynch went back to the reason why the policies and laws are in place as a reason why change should be measured and tightly controlled.

Tiahrt and Lynch need to offer more concrete reasons to keep the JWOD mandates in place beyond the “it’s the law” argument. As we’ve seen time and again with small business socioeconomic programs and others, that line of reasoning hardly ever works.

Several panelists pushed GSA and OMB to determine and make public the goal of this entire effort. Raj Sharma, CEO and Co-Founder of Censeo Consulting and founder of the Public Spend Forum, said the lack of clarity in the legislation means GSA and OMB must come up with the goals of the program.

“What does competition mean or pricing mean? Is it by the unit or total spend or what? We need to be clear about the problem statement and the outcomes we hope to achieve and that will drive the overall strategy and processes you must cover and compliance requirements that need to be addressed,” he said. “We need to be clear about what we mean about e-commerce portals too. Do we mean e-procurement or e-auction or e-markets? In some ways, the government has adopted ecommerce through things like GSA Advantage or reverse auction sites.”

He added the private sector has defined these concepts very differently. Sharma said with e-marketplaces, vendors can easily ramp on and ramp off, while e-procurement sites include more flexibilities to manage the needs of users.

These definitions are important as the commercial marketplaces come with a wide assortment of challenges.

Jean Edwards, director of business development and program capture at Dell-EMC federal sales, said some commercial online marketplaces use a “pay-to-play” model to push certain companies to the top of searches.

“This should not be a condition for the federal government,” she said. “By allowing this structure to prevail would have two effects. It would limit the range of products, services and prices especially around small businesses because it favors large businesses who are able to support the pay-to-play toll. Second, existing online marketplaces that provide IT require IT solutions that utilize only the marketplace portals around cloud solutions so when cloud is part of IT solution, it excludes other providers. That limits competition for price and access. Vendor must be able to define products and services they choose to make available through the portal.”

House lawmakers make it clear that their goal is to get more competition through the marketplace to lower costs.

Alan Chvotkin, the senior vice president and general counsel for the Professional Services Council, an industry association, said if competition is the overarching goal, then multiple portals need to be part of the effort.

“Then the question of what is competition within the portal. As a portal provider, if only one vendor product is available depending on whether your business model is that of an aggregator or not. I think it’s important to think about the definition in that context and make it clear that competition would be around and among the portals,” he said.

Roger Waldron, president of the Coalition for Government Procurement, another industry association, put a finer point on the need for defining the program’s goals particularly around competition.

“Is it a shopping mall? Or is it more interactive where government is seeking a quote based on dollar size of order? That’s the rub,” he said. “Some portal providers you may be going directly to them to buy something, depending on the nature of the contract. If portal providers want to hand-off to a third party to make the sale, then the question is whether sellers compete in some manner or form? I don’t know many commercial platforms that do the back and forth for sellers. I think you can do that on FedBid and GSA E-Buy, but that’s not within the context of this portal discussion.”

This is why Sharma’s recommendation to define the goals of the effort at the beginning is so important. 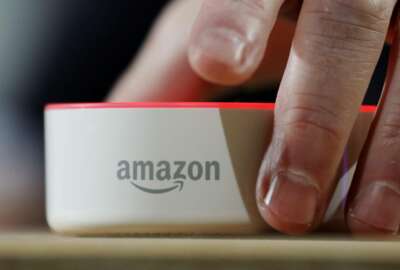