The U.S. Postal Service has a simple message for Congress: Postal reform legislation needs to pass now, and in fact, should have passed long ago.

The consequences of doing nothing will impact the core of the USPS mission, Postmaster General Megan Brennan told the Senate Homeland Security and Governmental Affairs committee during a Jan. 21 hearing.

“In some ways, we’re already beginning to see casualties from that legislation not having been passed,”...

The U.S. Postal Service has a simple message for Congress: Postal reform legislation needs to pass now, and in fact, should have passed long ago.

The consequences of doing nothing will impact the core of the USPS mission, Postmaster General Megan Brennan told the Senate Homeland Security and Governmental Affairs committee during a Jan. 21 hearing.

“In some ways, we’re already beginning to see casualties from that legislation not having been passed,” USPS Inspector General David Williams said. “The vehicles that we’re planning for the future are probably not exactly the vehicles we would have. The build down, which has caused some disruption, we hope temporarily, was partially caused because it had to be rushed. There wasn’t enough money to have a coherent, gentle glide. And I would say morale. The time to pass legislation has passed, and we’re beginning now to unscrew lightbulbs from the tree.”

The committee is weighing a wide range of potential reforms, some of which Ranking Member Tom Carper (D-Del.) introduced in his bill, the Improving Postal Operations, Services and Transparency Act (iPOST) last year. The bill would create a new health benefits program specifically for postal employees and annuitants, and require that eligible employees and annuitants also enroll in Medicare, among other proposals in the act.

But the committee’s chairman, Sen. Ron Johnson (R-Wis.), expressed some skepticism that addressing every single one of the problems facing a 240-year-old mail delivery system, just isn’t possible.

“What are the areas of agreement between all the interested parties?” Johnson asked the panel of witnesses. “I know Senator Carper wanted a touchdown. Maybe we ought to be thinking about a field goal. What are the things that we absolutely must do to avoid a real calamity, in terms of the postal system or pricing? What is going to be possible here in the short term?”

Fully integrating postal employees and retirees over age 65 into Medicare, rather than pre-paying for retirees’ health care, is one idea that Brennan said has broad consensus.

Brennan said a congressional mandate that requires pre-funding  is the main source behind the agency’s financial woes. The Postal Service is the only agency expected to fulfill that requirement, and pre-funding liabilities cost USPS at least $100 billion.

“The Postal Service … pays more money into Medicare for the the Postal Service and their employees, than all but one other employer in the country,” Carper told reporters. “Yet their retirees, once they reach the age of 65, don’t fully participate in that. They don’t realize the full benefit of making all those payments. That’s just not fair, that’s not right. We need to address that and I think we can.”

The Postal Service did earn an operating profit for the second straight year. It brought in $1.2 billion in controllable income last year, down slightly from the $1.4 billion it made in 2014. Postal Service revenue increased by 1.6 percent over the last fiscal year, reaching $68.9 billion in 2015.

Brennan said USPS will likely cut costs by another $5 billion by 2020. But years of financial statements show the agency will have to find new ways to increase its revenue, said James Millstein, former chief restructuring officer at the Treasury Department.

“This patient is soon to be bleeding cash, not making revenue,” he said. “As it bleeds cash, it really has no choice but to cut back on service standards and cut back on the network in order to be a self-sustaining entity.”

Giving the Postal Service more flexibility to raise its prices, as its competitors have done, is a start, Brennan said.

Congress gave USPS the authority to raise rates temporarily in January 2014. Since then, the agency made $3.6 billion in more revenue. But that authority will expire in April.

Brennan is also pushing for more innovation in her agency’s business model, particularly as mail volume declines and demand skyrockets for package delivery.

“We’re looking for more flexibility in pricing and product,” she said. “One example that we should consider is, if we have more than 200,000 vehicles, as I mentioned, traversing more than 4 million miles on any given day … there is an opportunity for us to partner with these local municipalities and apply sensors on our delivery vehicles that could consider road conditions and traffic patterns.”

The Postal Service is also obligated to operate at more than 150 million delivery points. Some committee members stressed the service’s universal delivery obligation is still critical, particularly in rural parts of the country, and cutting more services is a detriment to their communities.

Sen. Jon Tester (D-Mont.), who said he met recently with Acting Office of Personnel Management Director Beth Cobert, reiterated that point and reminded the committee that the most secure way the government could notify victims of the OPM cyber breach was through the mail.

‘Better ways to say thank you’

Committee members are concerned that constant conversation about the Postal Service’s financial struggles has a broader impact on the morale of the agency.

“I haven’t counted it yet, but you can feel it,” Williams said. “You can feel it everywhere. We do have a problem.”

Carper said he expects to begin follow-up conversations with Johnson on the ideas he heard from witnesses and on his legislation next week.

He said he was encouraged that despite skepticism, Congress can craft comprehensive postal reform.

“It’s not fourth down and goal to goal,” Carper said. “It’s probably first or second down. At some point, we’ll probably have to kick a field goal. Right now, I want us to get a touch down, not just for Congress, but really for three folks: the Postal Service employees, their customers and our taxpayers. We need a touchdown for them, and if in the end we have to settle for a field goal, we will. But we have a couple downs left. Let’s use them.” 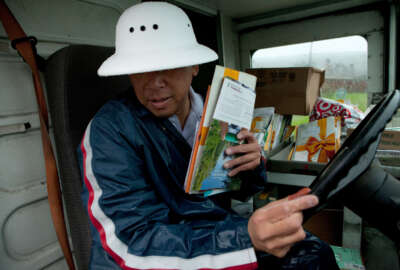 For USPS, another year, another mixed financial report