Today, the de facto cloud model for federal agencies consists of both –...

Federal News Radio brought together a panel of experts to explore the ins and outs of the hybrid cloud model. Participants were Richard McKinney, the CIO of the Transportation Department; Kirk Kern, chief technology officer at NetApp; and Matt Livingston, cloud computing architect at SAIC.

Panelists agreed on several advantages of the hybrid model. It lets agencies fine tune their hosting strategies for maximum flexibility and scalability. It catalyzes application modernization by requiring rewrites so applications become cloud-aware. Typically that means virtualized for portability and performance, and optimized for the statelessness. The hybrid model offers a way for agencies to move applications like email or development sandboxes to flexible, scalable clouds at low risk. It provides an economical fail-over and disaster recovery mechanism.

McKinney cited one instance where an application related to automobile recalls – thanks to it being so-optimized and able to run in multiple instances in a hybrid environment – was able to instantly scale from a few thousand daily hits to millions and millions within a few hours.

Acceptance of the hybrid cloud model didn’t come about by accident. Detailed guidance from the National Institutes of Standards and Technology has fostered a mature approach to cloud services consumption. The Federal Risk and Authorization Management Program (FedRAMP) has helped an ecosystem of cloud providers, brokers and cloud services contractors develop.

This discussion includes tips for moving your agency comfortably into the hybrid cloud world.

Richard McKinney is the Chief Information Officer (CIO) for the U.S. Department of Transportation (DOT). He was sworn into office on May 13, 2013.

Richard served most recently as a Senior Fellow for the Center for Digital Government. From 2005 to 2011, he was the Government Technology Advisor for Microsoft’s State and Local Government division. Richard served from 1999 to 2005 as Chief Information Officer for the Metropolitan Government of Nashville and Davidson County, a consolidated city/county government. In Nashville, Richard led the Department of Information Technology Services from a “last place” ranking in the 1999 Governing Magazine “Grading the Cities” survey to a top ten finish in the Center for Digital Government annual “Digital Cities” survey starting in 2003.  Nashville remained in the top ten ranking for six straight years.  Prior to working for Nashville city government, Richard was the Director of Information Services for the Tennessee General Assembly from 1995 to 1999.  He served as Assistant Commissioner of Administration for the State of Tennessee Department of General Services from 1987 to 1995.

Kirk is CTO for National Programs at NetApp and is currently developing strategies and initiatives that form secure and scalable storage environments for cloud based and traditional IT environments. Kirk was originally a member of the IBM Federal Systems Division in the early 90s and rejoined IBM in 2004 where he became an IBM Senior Certified Executive IT Architect as well as an Open Group Mater Certified IT Architect.  Today at NetApp, Kirk is responsible for cultivating new technologies and architecting systems that support the mission critical IT processing requirements on U.S. government major programs.  Kirk’s primary responsibilities include designing system architectures as well as tuning, porting, and optimizing the performance of large scale unstructured data repositories.

Matt Livingston is a Cloud Computing Architect for SAIC.  He has broad experience in the architecture and design of complex information technology systems, specializing in public and private cloud computing solutions for United States Department of Defense (DoD) customers and SAIC internal product offerings.

Matt Joined SAIC in 2009 in the Company’s Defense Solutions Group, where he led the design and implementation of virtualized datacenters for DoD customers, as well as the migration and consolidation of enterprise applications.  He later assumed a leadership role within SAIC’s Cloud, Cyber and Data Science services group. 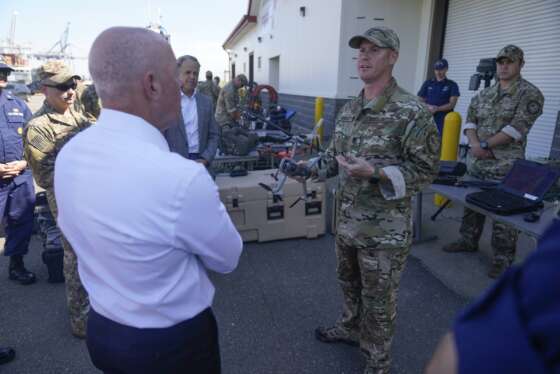 Check out these drones