Subscribe to Federal Drive’s daily audio interviews on iTunes or PodcastOne
Call it luck, unintentionally good planning, or an abundance of caution, but months before Hurricane Harvey barreled into the southeastern United States, the Small Business Association was running through a disaster training model equal to three times the impact of Hurricane Katrina.

“Little did we know then what we know now, we have three major hurricanes to respond to,” said James Rivera, associate administrator for SBA’s Office of...

Call it luck, unintentionally good planning, or an abundance of caution, but months before Hurricane Harvey barreled into the southeastern United States, the Small Business Association was running through a disaster training model equal to three times the impact of Hurricane Katrina.

“Little did we know then what we know now, we have three major hurricanes to respond to,” said James Rivera, associate administrator for SBA’s Office of Disaster Assistance. “The impact of Hurricane Harvey, and then Hurricane Irma, followed by Hurricane Maria has greatly expanded the footprint of affected disaster regions. At this stage in the recovery efforts, I want to emphasize a few items: First, the dedication of the men and women on SBA’s disaster assistance team; second, the response by our agency at an enterprise level supporting our office; third, the interagency coordination by our federal partners, which in my opinion, have been unparalleled with any recent disasters; and fourth, the foresight of this administration in identifying and declaring early on federal disaster areas.”

Rivera shared his pride in his agency during a Wednesday Senate Committee on Small Business and Entrepreneurship hearing on SBA’s response so far to the 2017 hurricanes.

“I want to emphasize that we are in the somewhat early stages of a transition to long-term recovery and from day-to-day, we anticipate loan approval totals to increase significantly,” Rivera said. “Currently, we’re approving more than $36 million per day in disaster loan funds and we’re still strengthening our staffing numbers. Maria is still in a responsive, lifesaving, and life-sustaining mission. We do not have any approved loans for Hurricane Maria yet. SBA disaster personnel are already pre-positioned after responding to Hurricane Irma.”

Rivera said thanks to supplemental funding from Congress, SBA got an additional $2 billion added to its $3 billion in loan authority.

Rivera said SBA is continuing to train and onboard critical personnel, and SBA Deputy CIO Guy Cavallo told Federal News Radio in the next six weeks the agency would be doubling in size through the hiring of temporary workers.

Rivera said SBA has around 25 staffers on the ground in Puerto Rico, and in fact, 10-15 of them had to shelter in place when the hurricane hit. SBA also has about a half-dozen local hires there as well.

Rivera said SBA plans to open disaster recovery centers in Puerto Rico, like the ones already up and running in Florida and Texas.

“From our perspective, what we’re doing right now is we are closely following FEMA, we’re going out into the communities with FEMA, to do the registrations, to do that type of work,” Rivera said. “We’re in response mode. There’s only so much we can do when we start the recovery piece. The priority obviously is the food, the water, the electricity. We’re on the ground, we’ve been on the ground, as soon as they start opening up business recovery centers, we’ll have that opportunity with the local small business development centers, we’ll work through that process. It’s premature for me to say how many will be opened, but we’re going to be there for the long term.”

SBA is working with FEMA to go out into the communities to help hurricane victims without power to register for aid, and will continue to do so until grids are restored.

“We’re not a first responder at SBA, we’re there to help with repair and to replace what was damaged by the disaster,” Rivera said. “If you need food, if you need water, shelter, you’re not worried about your home that’s damaged, but as we cross that bridge between response and recovery, I can assure you that we’ll do everything we can.”

Sen. Joni Ernst (R-Iowa) pointed out that as response moves to recovery efforts, there needs to be an understanding about the difference between the continental states and the island territories.

“There will be some differences between the devastation that’s occurred in those remote locations versus something that might happen in Iowa or even Texas or Florida, where we can just drive those supplies right on in and start recovering right away,” Ernst said.

Sen. Chris Coons (D-Del.) wanted to know about coordination between SBA, FEMA and the Department of Housing and Urban Development.

Rivera said SBA co-locates with FEMA in disaster areas, and both agencies share information with HUD.

“We have a data-matching agreement where SBA and FEMA share data all the time, and then when HUD comes in with their assistance, they have the ability to look at everything FEMA has provided and SBA has provided,” Rivera said.

But not every committee member felt SBA was working as well as it could with fellow agencies. Both Sens. John Kennedy (R-La.) and Tammy Duckworth (D-Ill.) expressed frustration in the information available on duplication of benefits.

Duckworth said former SBA Administrator Maria Contreras-Sweet testified at a hearing last year that SBA was working to clarify the rules around what loans someone could take and whether that would disqualify them from other money.

“And obviously from my colleague, this is still an ongoing problem,” Duckworth said. “This isn’t red tape, this is just good customer communications and good customer service. I’m concerned that we may be repeating past mistakes.” 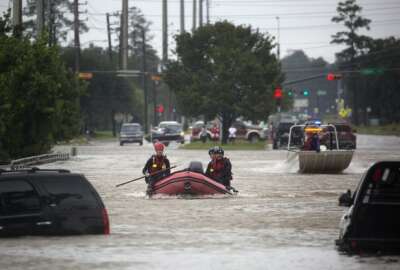