As Houston continues to deal with record rainfall, the military is working on local, state and federal levels to meet needs that it thinks will reach Hurricane Katrina levels.

The Defense Department is bracing for a long haul in continuing to provide emergency services to Texas and Louisiana from Hurricane Harvey.

“Our response to this hurricane has been different than anything we’ve experienced before and we expect it to be much longer in terms of...

As Houston continues to deal with record rainfall, the military is working on local, state and federal levels to meet needs that it thinks will reach Hurricane Katrina levels.

The Defense Department is bracing for a long haul in continuing to provide emergency services to Texas and Louisiana from Hurricane Harvey.

“Our response to this hurricane has been different than anything we’ve experienced before and we expect it to be much longer in terms of a response phase in what we would normally see during a hurricane just due to the nature of the storm,” said Maj. Gen. James Witham, domestic operations and force development director for the National Guard.

At the height of Hurricane Katrina there were 50,000 National Guard troops deployed and 20,000 active duty.

Witham said he anticipates the situation will be similar for Houston.

The state of Texas has already called up its full National Guard force of 12,000 troops. The state has 19,000 total troops, but 7,000 are either just coming off of a deployment or are currently deployed in other areas.

Witham said another 4,000 guardsmen will be joining the effort in the next 24 hours. Those troops are participating in ground and air rescue missions, shelter operations, route clearance, water purification, logistics movement and recovery after response.

The National Guard has another 20,000 to 30,000 troops prepared to go into Texas to add to the numbers or to relieve troops who have been in the field. Those extra units include engineers and an extra rotary wing.

“Just like our first responders get tired and burn out, guardsmen will also get tired and burn out as we do this. So this has to be a phased approach, and Texas is planning for that phased approach, not only with their organic National Guard forces, but National Guard forces that could be brought in from surrounding states through emergency assistance compacts,” Witham said.

The National Guard has used 500 ground vehicles in its effort. About 200 of those are high profile water vehicles, which can move in 2 or 3 feet of water. The Guard has 200 more high profile vehicles prepared if needed and can get additional vehicles from neighboring states.

The Guard is using 30 helicopters for search and rescue and medivac purpose. Abbott requested another 24 helicopters that are en route to Texas today. Witham said the number of helicopters could grow to 100.

Witham said the numbers are very fluid considering the number of rescues happening each day.

Witham said there was no estimate for the cost of the personnel being used at this point.

The federal government has mostly supplied equipment to the Hurricane Harvey effort.

There are also 400 active duty troops in Louisiana in preparation for heavy storms there.

“Being ready and in place is as important as any training that we do, and our engagements at parish level are absolutely critical,” said Army Maj. Gen. Glenn H. Curtis, Louisiana’s adjutant general. “In anticipation of the storm’s track, we continue pre-positioning equipment and vehicles in potentially affected areas, as well as responding to the immediate needs of today.”

The Louisiana Guard has eight helicopters on the ready for search and rescue missions.

The federal government appointed Brig. Gen. Pat Hamilton as the dual-status commander in Texas. He is in charge of National Guard troops as well as any federal troops in the area.

As far as equipment goes, 39 helicopters and seven planes are being used by the Coast Guard at bases in Houston and New Orleans. The Navy is preparing its amphibious assault ship, the USS Keasrage, and landing ship USS Oak Hill.

The Navy also had some trouble with its plans as Harvey barreled toward the city. Seventy-one of the Navy’s T-45 trainer jets were left in hangars at Naval Air Station Kingsville, Texas. The planes were not ready to fly off base to another area. 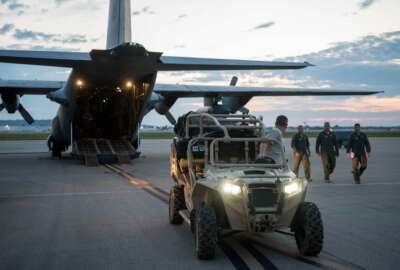