“We now have a fully experienced leadership team in place at all levels, and it is better because we have a workforce dedicated...

“We now have a fully experienced leadership team in place at all levels, and it is better because we have a workforce dedicated to the care of veterans, their families, caregivers and survivors,” he told the Senate VA Committee at a hearing Wednesday afternoon. “And I will say, [it’s] better because the turmoil of the first half of 2018 is now in the rearview mirror. Our new team is on the same page, speaking with one, unified voice on behalf of veterans.”

Wilkie said he has been traveling to VA facilities to “walk the post” and “be seen.” When asked about employee morale at the agency, Wilkie described it as “calm.”

“They’ve been through a lot,” he said of VA employees. “Their lives have been upset by an agency that’s been run by anecdote. I will continue to walk the post and when the opportunity presents itself, I will tell the good news stories.  I’ll also tell the truth. The state of the VA is better. I didn’t say good or excellent. It is better.”

Still, members on the Senate VA Committee said they desperately want things — this time — to be different.

“I mean this, I want you to succeed, man,” committee Ranking Member Jon Tester (D-Mont.) said. “I really want you to succeed. After your confirmation, you deserve some space to get your bearings. You need to get your team in place, and you need to bring some stability to the agency. It has been 60 days, and I think we can all acknowledge that the honeymoon is over.”

In his written testimony, Wilkie described five separate and specific examples where VA employees had lived up to the department’s values.

Four employees on their way to work at the Phoenix VA medical center stopped and talked a veteran out of committing suicide.

A researcher and biomedical engineer at a facility in Michigan is working to create an artificial lung using 3D printing, which the department has said could change the way VA treats veterans with lung disease.

Tester referenced a recent statement from the Partnership for Public Service, which encouraged the committee to be an active collaborator and steward of oversight with the VA.

“We recommend that the committee do more to engage the secretary and the department’s staff in understanding why these civil servants are able to innovate and solve problems, and how those lessons learned can be applied across the department,” Partnership President and CEO Max Stier wrote. “While the passage of the VA Accountability and Whistleblower Protection Act of 2017 represents a significant shift in the department’s approach to addressing accountability and leadership challenges, the cultural changes this committee would like to see at the VA will not occur simply by firing under-performing employees.”

Wilkie also offered up a few, minor details on the status of some of the department’s biggest initiatives.

Though it’s not definite, Wilkie said he and the Defense Department are considering how they could more clearly define a governance structure for the 10-year, $16 billion electronic health record modernization.

The inter-agency program office is supposed to serve as a single point of contact of accountability for the two departments’ efforts to achieve interoperable health record systems. But as the Government Accountability Office and agency officials told the House VA Committee’s new technology modernization subcommittee earlier this month, the IPO isn’t functioning that way.

“We are in discussions as we speak with the Department of Defense to hopefully … make those solid lines and create that one, single point of authority,” Wilkie said.

VA is also preparing a report for Congress on an EHR governance structure. Wilkie emphasized that building a solid partnership with the Pentagon would be key.

“If we don’t get the front-end of a member’s service right with the electronic health record, it really doesn’t help us when that veteran comes into our system,” he said. “One of my goals is to make sure that the DoD end works.”

VA still has more than 45,000 vacancies, a figure that despite the agency’s best efforts, hasn’t budged in recent years. It’s been a point of frustration for Tester and Sen. Richard Blumenthal (D-Conn.), who questioned whether the department is really using the new hiring authorities it’s been given in recent legislation.

Agency leadership, in some places, has used the VA Accountability and Whistleblower Protection to implement some controversial new performance standards this year.

Wilkie on Wednesday said he was looking at new ways to evaluate employee performance but didn’t offer more detail.

And he didn’t say he would begin using performance improvement plans (PIPs) again, as Sen. Sherrod Brown (D-Ohio) requested during the hearing. .

Brown was one of a handful of Senate Democrats who had written to then-VA Secretary David Shulkin about his concerns with VA’s new performance standards. That letter cited stories of VA employees who were removed from their positions after failing to move quickly after suffering a workplace injury, for example.

When asked whether VA’s new authorities unfairly targeted lower-ranking employees, Wilkie said the new Office of Accountability and Whistleblower Protection (OAWP) had 280 open investigations of GS-15 employees and above. 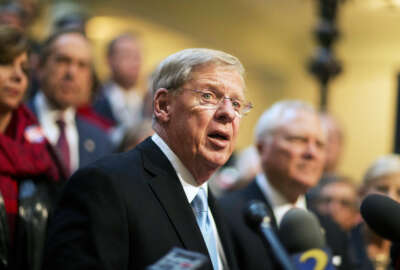