A commission to oversee the closure of some Veterans Affairs Department health care facilities and the construction of new ones across the country lost support from a bipartisan group of senators.

Now the commission has lost its chance for funding in the House.

The House version of the fiscal 2023 spending package that passed Wednesday includes an amendment defunding the VA’s Asset and Infrastructure Review (AIR) Commission.

A commission to oversee the closure of some Veterans Affairs Department health care facilities and the construction of new ones across the country lost support from a bipartisan group of senators.

Now the commission has lost its chance for funding in the House.

The House version of the fiscal 2023 spending package that passed Wednesday includes an amendment defunding the VA’s Asset and Infrastructure Review (AIR) Commission.

The commission, under the 2018 MISSION Act, is supposed to review the VA’s recommendations released in March on how it expects to right-size its real-estate portfolio of medical facilities across the country.

On the House floor on Wednesday, McGovern said the VA’s recommendations to the AIR Commission would “force veterans to drive hours and hours and hours across state lines just to get basic care.”

“This process so far is a complete and total slap in the face to these veterans, and we should not spend a penny more on a commission used to advance these awful cuts to veterans’ services,” McGovern said.

The House voted 238-191 to include the amendment, then passed the spending bill in its entirety. McGovern said the amendment has the support of House VA Committee Chairman Mark Takano (D-Calif.), who has raised concerns about the AIR Commission process.

Votes in favor of the amendment included 43 Republicans.

A bipartisan group of a dozen senators put out a joint statement last month rejecting the AIR Commission process, as well as VA’s recommendations to shape its footprint of health care facilities across the country.

The VA recommended closing approximately three dozen VA medical centers (VAMCs) but would replace about half of them with new construction.

The American Federation of Government Employees said the recommendations would lead to the closure of 20 VA medical centers.

AFGE President Everett Kelley on Thursday applauded the House vote, warning that the commission would have resulted in “VA mass closures.”

“As the number of veterans eligible for VA health care is expected to increase, Congress must appropriate funds to fully staff the VA, modernize existing hospitals and clinics, and build new facilities – not spend millions in taxpayer dollars to close them on the basis of faulty and outdated market assessments,” Kelley said.

“I anticipate, given the steps the president has taken to date, and his focus on the fact that our facilities are relatively older by an order of magnitude than the average facility in the private sector, that the president will continue to ask for the levels of funding necessary for us to modernize this system,” McDonough said.

McDonough said the MISSION Act requires the agency to update the market assessments that served as the foundation for its AIR Commission recommendations every four years.

“I don’t see any of the provisions in the House or Senate right now stopping us from doing that. And doing that, updating those assessments is really important. I think one thing everybody agrees on is the assessments that were made initially are now dated, inasmuch as they are based on a pre-pandemic view of healthcare.  So we will continue to update those market assessments,” McDonough said.

President Joe Biden submitted nine nominees to serve on the AIR Commission, but the Senate has yet to act on any of those nominees.

If confirmed, commissioners would review VA’s plans and issue their own recommendations to the White House.

But time is running out for the AIR Commission process. Biden has until Feb. 15, 2023, to approve the AIR Commission’s final recommendations. If he doesn’t submit his approval to Congress before March 30, 2023, the process for modernizing and realigning VA’s facilities under the MISSION Act ends.

Without the Senate’s confirmation of the nominees, the commission will not be established, and the process to right-size VA real estate under the VA MISSION Act will not move forward.

“Why are we giving $5 million to a commission that may very well never exist and actively seeking to undermine our care for our veterans and families?” McGovern said.

McDonough has repeatedly said VA’s recommendations to the AIR Commission were based on market research that started in 2019, and doesn’t account for shifts in the demand for health care since the start of the COVID-19 pandemic.

“There is no way that anybody here can tell me that the recommendations that are being put forward are based on accurate, updated information. We are talking about our veterans, who are now going through needless anxiety because of all these threats of closure. We need to do better,” McGovern said. 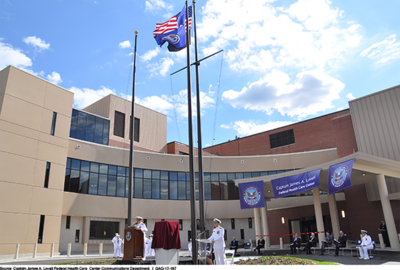