If you go by the vote count as it stood over the weekend, you could conclude that the next administration will belong to Joe Biden. The Senate looks to remain with a slim Republican majority. And a House that’s slightly more balanced between the two. WTOP Capitol Hill Correspondent Mitchell Miller has been watching this minute-by-minute. He...

If you go by the vote count as it stood over the weekend, you could conclude that the next administration will belong to Joe Biden. The Senate looks to remain with a slim Republican majority. And a House that’s slightly more balanced between the two. WTOP Capitol Hill Correspondent Mitchell Miller has been watching this minute-by-minute. He joined Federal Drive with Tom Temin with details.

Tom Temin: Mitchell, you’ve had a pretty rough week yourself covering and staying on top of all this. What are you thinkin this is all gonna look like in terms of relationships between the White House and the Congress?

Mitchell Miller: Well, this last week has really been incredible, hasn’t it been? But I think what we’re now doing is preparing for the traditional transition of power, obviously, we’re going to have still some legal wrangling over a lot of different things related to the election. But from the perspective of House Speaker Nancy Pelosi she is basically getting ready for what she believes will be a Biden administration and looking at the traditional levers of power and how things are going to move forward with a variety of things. Among the things that they’ve got to tackle right away is the appropriations process, because of course, the government is going to run out of money again early next month. She actually addressed that at her news conference last week, and said that she really wants to get something fully approved that she doesn’t want a continuing resolution, we’ll have to see what happens there. Republicans will obviously have their own ideas about things. It’s interesting that in her news conference she also said that she feels that Joe Biden is going to have a strong mandate. I think a lot of people would take issue with that, obviously, Senate Republicans would. Senate Republicans may not know exactly what their final count is, as you indicated, but it looks like they are going to hold their own. They had 23 seats that they had to defend. And basically, the Democrats didn’t quite get what they wanted, obviously, you’re going to have possible runoff races, at least one in Georgia and possibly another. So it looks like there’s going to be what could be kind of the traditional back and forth struggle of power between the White House and Republicans. What’s really going to be interesting is to see how much the Republicans hang on to the Trump hangover, if you will, and decide that they are basically going to stick with all of the things that they plan to do earlier, or are they going to be more amenable to some of the proposals that Democrats are going to have.

Tom Temin: And I guess the opposite is also true. The Democrats were widely seen as losing those seats because of some of the more ultra proposals from the progressive wing. And so maybe they will say, well, maybe that’s not such a great selling point either.

Mitchell Miller: Right. I mean, as you know, there’s a lot of angst, political angst, within the Democratic Party, particularly among centrist Democrats. Some of them hung on to their seats like Congresswoman Spanberger, Abigail Spanberger in Virginia. And they have made it clear that they want to make sure that a lot of the centrist type of policies are pursued by the Democratic Party, they want full financial responsibility, they want to look at some of these family table top issues that how Speaker Pelosi often talks about. So I think, at least initially, you’re not going to see the big push on the left side of the caucus, and that a lot of efforts are going to be done to just kind of get the nuts and bolts of government and spending together over the next several weeks.

Tom Temin: And I guess Congress really can’t have anything directly to do with this. But if the Trump administration really is not going to prevail in all of the legal battles, the time for transition planning has to go on without the cooperation of that administration, as a president elect Biden would pick cabinet members and so on, they can’t really count on a lot of cooperation from a team that is maybe under orders to do nothing until it’s all over, which could be months yet.

Mitchell Miller: Right. As you know, I mean, the lame duck session is always kind of interesting no matter what, but I think this one is going to be even more unique for just the reasons that you mentioned, because the administration has made it clear it doesn’t want to really go along with a lot of the things that the Democrats want to do. So many of the traditional things that we’re used to in terms of one party saying, okay, we’re going to get things ready for you. Here’s what our plans have been for X, Y and Z, I don’t really think that that’s going to happen necessarily with the Trump administration. So it’s going to be really interesting to see, for example, on the issue of the coronavirus, House Speaker Pelosi last week said that she wants to get going on this again that time is of the essence, especially with the number of cases of COVID-19 going up, but how much is the Republican party going to do that, particularly if the president doesn’t seem to have any impetus to do that.

Tom Temin: And getting to some more parochial matters. The committee chairmanships in both sides will probably continue, such as Gerry Connolly at the House Oversight and Government Reform Committee. So from the federal workplace standpoint and that kind of policies related there too, probably not a whole lot will change from the standpoint of Congress.

Mitchell Miller: Yeah, despite all the turmoil of the presidential election, I think that there will be a basic stability there within the House. I mean, the House Democrats, obviously lost seats that they didn’t think they would lose, but they did hold on to some of those key positions that will keep that stability, at least from their standpoint, obviously, there’s concern on the Republican side about what’s going on there. But for example, with the House Oversight Reform Committee, you have Carolyn Maloney, who had a very interesting race of her own in New York, but she is still the chair of that committee, and Gerry Connolly, as you mentioned, will chair the government operations subcommittee, I’m sure you’re going to have a lot of follow up in connection with the US Postal Service and everything that happened there with the election. But you’re going to see basically the continuity of congressional government and governance there. So I think for federal workers, many of these things that we’ve been talking about, while they are sometimes eye popping on a day to day basis, I think there will be kind of a gradual consistency and some kind of return to what we’re expecting, oftentimes on Capitol Hill.

Tom Temin: And I also think that some of the Trump administration initiatives with respect to the workforce that the Democrats dislike intensely, the Republicans have gone along with, I don’t think the intensity is there as much. So as Biden, we presume would pull those back, probably they would get pulled back without Congress interfering.

Mitchell Miller: Right. I think that you’re going to see Joe Biden try to work much more closely with Congress than President Trump did. President Trump obviously had a very hand in hand relationship with the Republican caucus. But I think Joe Biden, he’s a person whether you like him or dislike him. He has that long term decades of experience on Capitol Hill. He knows how the sausage is made, if you will, and there will probably be a lot more efforts toward cooperation between the White House and here on Capitol Hill.

Tom Temin: Yes, sausage might be a good thing to serve on that inaugural day breakfast.

Tom Temin: Mitchell Miller is Capitol Hill correspondent for WTOP. As always, thanks so much and get some rest. 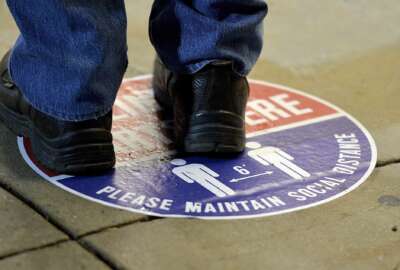