Tom Temin: And, so we can set aside whether there will be a filibuster or not be a filibuster until they return, I suppose, Mitchell, but what should we expect from Capitol Hill? Anything going on in the House we need to know about?

Mitchell Miller: Well, a lot of things are still going on. There will still be virtual hearings related to the House and the Senate Majority Leader Chuck Schumer has outlined a very ambitious agenda for this spring, when senators return. They include, of course, voting rights, which has created a lot of discussion related to the filibuster, as you well know. Also, another area he wants to attack is economy and jobs, basically infrastructure, as well as gun violence. So now where is all this going to go? Because of the filibuster, and because of the arguments over the filibuster, it’s really unclear where this will all be headed. For example, if you look at infrastructure, Pete Buttigeig, the new Transportation Secretary, was up here last week talking about making a generational investment. That could be anywhere from $3-$4 trillion. Potentially, it seems like every time we’re talking about a budget item, now, it’s in the trillions rather than the hundreds of billions. Clearly, Republicans are not going to go for a lot of this. And they are going to continue to hammer away on the issue of immigration, which of course, rocked the Biden administration a bit and has kept it kind of off balance as it tries to get its footing in that area. So I think we’re going to have a lot of back and forth, again, as we usually do with Democrats and Republicans. And I also do think related to the filibuster, that issue is going to come to a head at some point, because a lot of the progressives and the liberals on the Democratic side with voting rights really are pushing hard on Chuck Schumer to just get rid of the filibuster. He is playing coy at this point, but he’s listening to both sides on the centrist side of the Democratic Party, a lot of people pushing back and saying, don’t get rid of it.

Tom Temin: Interesting and with that idea of a generational investment, you want to almost say to Transportation Secretary Buttigieg, I knew General Eisenhower, etc., etc., etc. Maybe we’ll get a whole new system for electric roads or something? And what about federal employees returning to their offices? Are we hearing anything from the administration on sort of pushing that to happen? And has that been expressed to something Capitol Hill might be interested in?

Mitchell Miller: I think there’s going to be a lot of interest here on Capitol Hill in connection to continuing to push for telework at agencies. We’ve talked about Virginia Congressman Gerry Connolly has really tried to tackle this issue and get more pressure on these agencies to move and before the pandemic, it was a little bit less than I think 25% of people had actually teleworked from a federal agency. Well, last week, a little bit of momentum building with OPM indicating at the Federal Computer Week, as federal News Network reported, that they want everything to keep going in that direction. They don’t want to turn the clock back once the pandemic eventually starts to fade out. So you are going to see many more agencies, I think, moving forward on this front. And I think one of the most striking figures came from the Department of Housing and Urban Development (HUD), before the pandemic, only 3% of HUD employees teleworked every day before the pandemic. Now more than 90% has been doing some kind of telework. So that shows you the kind of change that has been made. Obviously, a lot of other agencies are moving ahead as well. Each agency, as you well know is very different, however. So I still think we’re going to see a lot of people returning back to the office, but a lot of people will still be able to work from home.

Tom Temin: We’re speaking with Mitchell Miller, he’s Capitol Hill correspondent at WTOP. And there’s another Biden White House gambit with respect to budget planning and how agencies go about that that reverses a policy from the Trump administration.

Mitchell Miller: Yeah, that’s a big one. The White House this week is expected to put out its budget priorities for the next fiscal year, and the acting head of OMB Robert Fairweather has put the agencies on notice that he’s reversing the Trump administration’s decision to remove guidance from the annual budget policy document that requires agencies to evaluate the performance of their programs. The Trump administration essentially contended, it just created a lot of data and a lot of paperwork and it was just a lot of busy work. But OMB is going back to setting strategic planning goals in the budget process. OMB director Fairweather says he thinks it’s important so taxpayers know exactly what’s being done to improve services to be more transparent. So there’s this directive now sets a June 4 deadline for agencies to submit draft and strategic plans and outline their priority goals to the OMB.

Tom Temin: Yes, because that was a type of activity that linking plans and performance to budget that transcended parties until Trump came along. I mean, that was a gambit in the Bush administration, as well as the Obama administration, so maybe agencies will want to see that come back, although I’m not sure anyone likes more paperwork and more data generation, but you can’t decide anything, I guess without the data. What’s going on on the security front on Capitol Hill? I’ve seen mixed reports there – the Concertina wire is mostly gone.

Mitchell Miller: That’s right. Well, it’s really interesting now, as somebody who comes into the Capitol virtually every day, it really is a big difference to have that outer perimeter fencing now all taken down completely. There is an inner perimeter fencing that goes right around the most immediate Capitol Complex. This past week, D.C. Del. Eleanor Holmes Norton, who has been highly critical of the fencing along with Maryland Sen. Chris Van Hollen, and Republican Sen. from Missouri Roy Blunt, they introduced a very simple, short piece of legislation that basically says, no federal funding should go toward permanent fencing in the future around the Capitol and around the buildings around the Capitol. And they say that, even though it’s in its early stages, there’s a lot of support from other lawmakers who, as we’ve talked about, have complained quite a bit about the fact that they just don’t like having all this fencing around. So they’re worried that something similar that would happen after the Oklahoma City bombing, remember when they closed part of Pennsylvania Avenue in front of the White House – that became permanent. And they make the argument that if you allow the fencing to go up, it’s only going to become permanent at some point, and they want to get ahead of that. So that’s a interesting proposal that is now being floated around the Hill.

Tom Temin: And although there are some secondary political appointees that do require Senate confirmation for when the Senate does return, the status of President Biden’s cabinet is pretty well filled out now, correct?

Mitchell Miller: It is. It got off to a relatively slow start. There was some concern that things were being held up on a lot of fronts. But really after last week, you effectively have the entire cabinet now approved. Basically about 15 people have all gone through. And really there’s only been one exception, where somebody did not actually get confirmed. And that of course was the nominee for the head of OMB Neera Tanden, who withdrew her nomination after it became clear that a lot of Republicans and even some Democrats were concerned a lot about her very pointed tweeting during her prior period before she was nominated. So other than that most of the nominees went through fairly smoothly. There was really not as much controversy as some people expected. I think the nomination process went about as smoothly as the Biden administration had hoped for.

Tom Temin: And one thing that’s not going very smoothly is the Southern border. And, of course, members of Congress have visited and there’s been complaints that the press hasn’t had adequate access to what’s going on down there. But nothing legislatively seems to be cooking up that would affect Homeland Security, Customs and Border Protection, any of those agencies.

Mitchell Miller: Right. There’s been a lot of discussion, as you will know, and it seems like there’s a congressional delegation down at the Southern border almost every other day now. And clearly republicans are going to keep the heat on the Biden administration. And a lot of liberal Democrats within the party are concerned that the Biden administration was really not ready for what many people call a crisis. But clearly, we’re on track right now to have a record number of children unaccompanied going to the border. And that is a huge issue. You mentioned about really no legislation. It’s true. But Republican Senator Lindsey Graham [of] South Carolina, he did reintroduce last week a proposal where he basically wants to tighten the asylum process, making it harder for people to come to the U.S. and stay here. And he also wants that to cover children as well. It gets very complicated, but also there’s the issue of what Mexico will do or not do in terms of taking people back. So this is going to be a very pernicious political issue for the Biden administration moving forward.

Tom Temin: Mitchell Miller is Capitol Hill correspondent at WTOP. Thanks so much.

Tom Temin: We’ll post this interview at FederalNewsNetwork.com/FederalDrive. Hear the Federal Drive on demand and on your device. Subscribe at Apple Podcasts or wherever you get your shows. 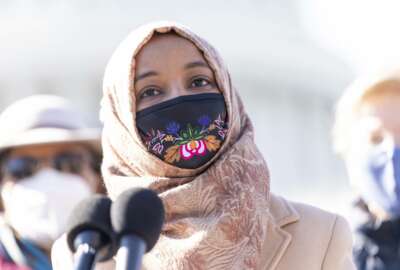 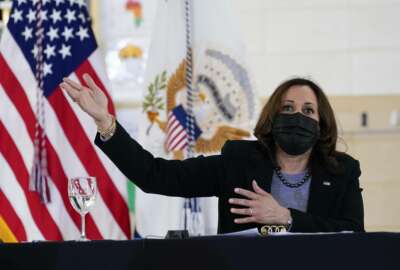 VP to focus on border diplomacy; no immediate plans to visit