Active duty service members’ top concerns are changing and they are less likely to recommend military service to their children. Meanwhile, the military remains a less hospitable employment environment for women compared to men.

Those are some of the top findings in the 2017 Blue Star Families Lifestyle Survey. The results may be discouraging news for the Defense Department, which is trying to recruit more troops, especially ones with diverse backgrounds, nontraditional educational experiences and...

Active duty service members’ top concerns are changing and they are less likely to recommend military service to their children. Meanwhile, the military remains a less hospitable employment environment for women compared to men.

Those are some of the top findings in the 2017 Blue Star Families Lifestyle Survey. The results may be discouraging news for the Defense Department, which is trying to recruit more troops, especially ones with diverse backgrounds, nontraditional educational experiences and skills pertaining to 21st century technologies.

For the first time since 2013, pay and benefits was not the number one concern of service members. Instead, time away from family came in as the top worry.

The change in priorities may show some of the operational stress being placed on the all-volunteer force as it continues to fight two wars. It also underlines the growing importance of family life to service members, something the Bipartisan Policy Center recognized in a report issued this spring.

“If the military is going to recruit and retain a volunteer force with the necessary skills, it needs … to better accommodate the evolution of American society and the American family. And it needs to do those things without sacrificing the aspects of the system that are working well,” former Sen. Jim Talent (R-Mo.) told Congress during a hearing this May.

This year’s survey had more than 7,800 respondents representing the whole of the military.

Along the lines of time with family, military families’ concerns about the impact of service on their children are rising. Two-thirds of military families said they could not reliably find the child care they need and 56 percent said DoD does not provide adequate support to help children cope with the unique challenges associated with military life.

Another statistic new to the survey this year found a majority of military families feel they don’t belong in their local civilian communities.

“There are military-connected people in every ZIP code in America, whether they are active duty, guard or reserve, and we are finding that people are experiencing isolation where they live. That’s something that everyone can do something about. You don’t need a law or a [Defense Department] regulation to correct that,” Blue Star Families CEO Kathy Roth-Douquet told Federal News Radio in a Nov. 1 interview.

The study also found some issues around women’s employment.

“We are also seeing some really interesting divergent trends in the experience of female service members versus male service members. We have a military right now that requires a high skill set and a lot of good behavior and less than a quarter of our population is eligible to serve,” Roth-Douquet said. “We need women in the military, bottom line. Right now, we have 15 percent. We are expecting that to go to 25 percent. If female service members continue having greater challenges, as we are able to see in this year’s survey, that’s going to have a real impact on the health of our military.”

“We think the reason for that is so many spouses had just given up looking for work. Unemployment means actively looking for work in the last four weeks. We think that the amount of attention Blue Star Families and our partners have been able to give to this topic has emboldened more military spouses to think that perhaps they could work and probably led them to seek it,” Roth-Douquet said.

Blue Star Families is working with Congress to better the opportunities for military spouses.

Sen. Tim Kaine (D-Va.) met with the group last week on the issue. 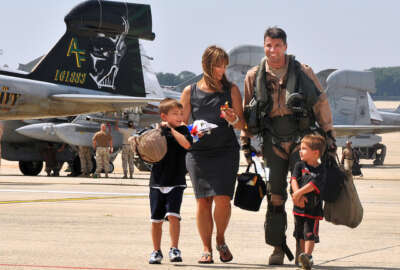